Did Humans Evolve from a Fish out of Water?

Evolutionists proclaim discovery of the ancestral anatomy for air-breathing terrestrials in an African fish.

While all fish have gills, God equipped some—bimodal breathers—with lungs to extract oxygen from air. This anatomical “extra” enables them to survive in poorly oxygenated water, make their way between pools, and estivate in mud during droughts.

All species of the freshwater African Polypterus fish are equipped to get oxygen using either lungs or gills. Until now, however, scientists haven’t known how polypterids get air to their lungs. A team from San Diego’s Scripps Institute of Oceanography, with paleontologist John Long of Australia’s Flinders University, confirms in Nature Communications that Polypterus breathes through the hole (spiracle) on top of its head. Long says, “We never knew what they were actually for until we observed the fish over a long period of time and found they were breathing through their spiracles.”

This discovery has evolutionists proclaiming our ancestors were fish equipped to inhale when they stepped out onto land millions of years ago. “Until now,” Long explains, “we've only had theories about the origins of breathing in the evolution of fish to land animals—some early 19th Century scientists had these wacky ideas that fish just jumped onto the land and started gasping for breath and developing limbs. But our research shows that the transformation actually started happening within the fish themselves while they were still in water.” 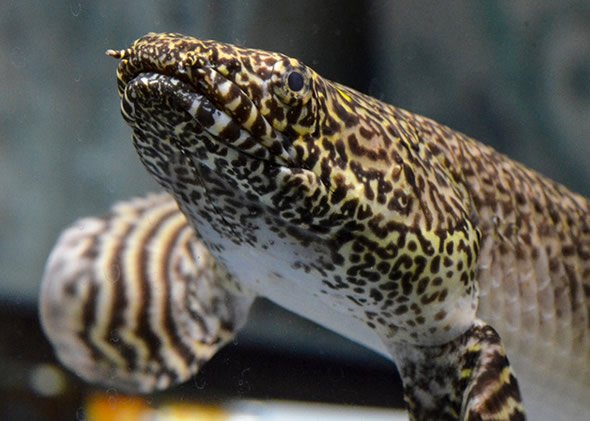 The fleshy-finned Polypterus fish is equipped with both lungs and gills. Scientists have now confirmed it can get air to its lungs by either popping its head out of the water to catch a breath or by slipping its spiracle up to the water’s surface and opening a valve. Polypterus has hinged bones on the top of its skull. These bones serve as a valve to seal the spiracle except when the fish opens it to breathe in. Air exits through the gills. Image: lapradei/Flickr through www.slate.com.

Polypterus means “many fins,” and for over a century scientists have debated whether Polypterus should be considered a lobe-finned or a ray-finned fish. The first polypterids were discovered in the Nile River in 1802 by Napoleon’s naturalist Etienne Geoffroy Saint-Hilaire. Studying polypterids in their native habitat has been difficult. Polypterids are found in African swamps, stagnant pools, and tributaries and lakes where the water is oxygen poor. Diseases endemic to these regions have cut short the careers of more than one biologist seeking to know whether these fleshy-finned fish held the key to the evolution of terrestrial tetrapods.

Before dying of black fever in 1903, British zoologist John Budgett reported hearing polypterids loudly aspirating air with a “sucking sound” while their mouths were submerged. Since then scientists have debated the function of the polypterid spiracle. A 1966 paper confirmed Budgett’s observation, but researchers in 1989 wrote, “These fish do not, as others have suggested, breathe through their spiracles.”

So is a polypterid a mouth-breather that must pop its head up for air or can it snorkel with its spiracle?

“When we first saw Polypterus breathe air through its spiracles,” says co-investigator Nick Wegner, “we knew we had solved a 100-year-old mystery. When we captured it on film, we knew we could prove it.” The polypterid spiracle was, after all, an auxiliary air portal.

On the left is a Polypterus, a modern fish with a large spiracle on top of its head. New research has demonstrated this air-breathing fish—unlike other fish living today—can take in air through its spiracle, using it like a snorkel. The extinct Gognosus (right) also had a large spiracle that it may have used in the same way. Images: John Long through www.slate.com.

Fish have gills throughout their lives. As many as 370 species, however, are bimodal breathers.1 Which oxygen source each relies on more fully depends on its anatomy and environment. Lungfish species from South America and Africa cannot even use their gills to get oxygen and rely just on their lungs; since their habitats are often poorly oxygenated, their ability to gulp oxygen from air is particularly useful. The Western Australian Lungfish, however, is able to breathe using either its gills or its lungs.

Polypterids, it turns out, can choose how to breathe their air. When stressed they often dash to the surface to catch a breath. Otherwise they prefer more leisurely spiracular breathing. The fish in this study were mouth-breathers 60% of the time when they could see people. When humans were hidden, however, the fish took time to align their spiracles with the water surface, drawing in 93% of their breaths that way.

These evolutionary beliefs are rooted in the discredited but oft-resurrected claims of embryonic recapitulation.

Some other living fish—coelecanths, sturgeons, and many sharks, for instance—are also equipped with spiracles, which provide a passageway to the mouth and throat.2 These fish use their spiracles to draw in water from which their gills can extract oxygen. Basking sharks, for instance, use spiracles to obtain oxygen from water even while covered with sand. Among living fish, only polypterids have spiracles large enough to significantly help them take in air.3

Some extinct fish also had spiracles. Some—like Tiktaalik and Gogonasus—had spiracles sufficiently large to have been used for breathing air. Long writes, “When my team discovered the Gogonasus with these large spiracles in 2005, we guessed they might have had something to do with air-breathing capability, but we had no evidence to prove this.” But now, Long says, “All this [polypterid spiracular breathing] points to the ability of these fishes to take in air from their spiracles as the first type of breathing, which ultimately helped them leave the water and invade the land.”

Evolutionists believe the spiracle is an evolutionary homologue4 of the air spaces and bones in the mammalian ear. Long says, “The spiracles eventually became the hearing canal in which tetrapods transmitted sound to the brain via tiny inner [sic] ear bones, and this has remained throughout the evolution of fish right through to humans. If not for the bold evolutionary experiments of these prehistoric fish breathing in air through the top of their heads, we might not have evolved such a keen sense of hearing.”

These evolutionary beliefs are rooted in the discredited but oft-resurrected claims of embryonic recapitulation—the assertion that embryos pass through stages reminiscent of an evolutionary past. The fish's spiracle develops embryologically from its first gill cleft and the adjacent second pharyngeal arch.3 Folds in the region of the human embryo’s throat are also called pharyngeal arches but are developmentally quite different. The human’s first and second pharyngeal arches and the adjacent first pharyngeal pouch develop into the three bones of the middle (not inner) ear and the middle ear cavity and Eustachian tube. Since the time of Ernst Haeckel (of fraudulent embryonic recapitulation fame) there has been a popular misconception that human embryos pass through a series of evolutionary stages including a “fish stage” complete with “gill slits.” (Read more about this erroneous notion in which claims like Long’s assertion about the origin of human hearing are rooted in “Something Fishy About Gill Slits!” and “Recapitulation Theory: Repackaged & Re-Applied.”)

This research has unraveled a biological mystery but not an evolutionary one. Laboratory videography cannot tell us anything about the origin of air-breathing terrestrials. The fact that this fish breathes through a spiracle does not demonstrate the spiracle was a primordial nose.

The discovery that spiracles serve as air passages for one kind of extant fish supports the idea that extinct fish with large spiracles could have used their spiracles for the same purpose. But those fish, like polypterids, were just fish. Extrapolating the spiracular snorkel up the evolutionary tree of life to supply a hypothetical ancestor with the earliest version of a nose and middle ear bones is rather fishy. Evolutionist John Long says “wacky” scientists thought fish leapt onto land and started breathing. Is it any less “wacky” to suppose “prehistoric fish” conducted “evolutionary experiments” in the past when biological evolution is never observed in the present?

Nothing about the spiracular breathing of polypterids demonstrates that fish evolved into terrestrials.

Nothing about the spiracular breathing of polypterids demonstrates that fish evolved into terrestrials. Rather, what we see here is a fish well equipped to take advantage of the air above a hypoxic habitat. We see a good design created by a wise Designer. While there is no way to know what fossil fish used spiracles for, as fossils no longer breathe, some extinct fish may have been designed the same way. But only evolutionary imagination connects fish spiracles to our noses, Eustachian tubes,5 and ears.

Similar features—like spiracles—are examples of common designs that a wise common Designer—the God of the Bible—used in diverse ways to produce the many kinds of creatures He created on the 5th and 6th days of Creation week about 6,000 years ago. He created all kinds of living things to reproduce after their kinds, according to His own testimony recorded in first two chapters of the biblical book of Genesis. We observe that living things still vary and reproduce within their created kinds but not that they ever evolve into new kinds of organisms.