Moving Forward in Our Understanding of Molecular Motors

During scientific discovery more questions often arise. This leads to one of the most wondrous aspects of science: the more we learn, the more we realize how much is left to learn.

The study of biology is like an endless playground. There is so much to explore and discover. In exploring one area, many fascinating details can be found. However, during this discovery more questions often arise. This leads to one of the most wondrous aspects of science: the more we learn, the more we realize how much is left to learn. The excitement of discovery never has to end. 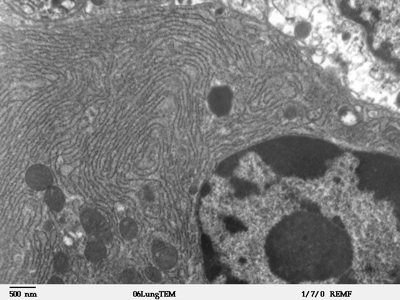 Figure 1. A picture taken by an electron microscope showing the nucleus of the cell (lower right) surrounded by an endoplasmic reticulum network. The tiny dots along the endoplasmic reticulum are ribosomes. The dark circles in the network are mitochondria. Click image to enlarge.
Source: Louisa Howard [Public domain], via Wikimedia Commons

When I was in college I enjoyed learning basic information about the cell. We learned about the major organelles such as the nucleus, ribosomes, and endoplasmic reticulum. I liked looking at pictures taken by powerful electron microscopes that showed details of these structures (figure 1). We learned the basic function of each of these structures. However, that was only the beginning.

Over the last few decades considerable research has uncovered more details and new marvels regarding the inner workings of the cell. Several years ago BioVisions at Harvard University released an animated video that gave some idea of the complex series of events that occur in a white blood cell when it responds to the call to leave the blood vessels and travel to a site of inflammation.1

One of the most memorable portions of the BioVisions video depicted motor proteins “walking” along microtubules as they transported large, balloon-like vesicles containing important proteins.2 Motor proteins are just one of many molecular machines that have been discovered within cells.

Many questions come to mind when considering these tiny but critical components of a cell. How do they work? With no brain in the machine, how does one “foot” stay planted on the microtubule while the other moves forward? If both “feet” came off at once, the motor protein and its cargo would certainly float away, which wouldn’t be too helpful for the cell. What keeps the motor moving in a single direction, rather than just shifting its “feet” back and forth so it gets nowhere? Slowly, it appears that some of these answers are being uncovered.

Motor proteins which “walk” on microtubules, such as in the BioVisions video, are known as kinesins. There are around 50 different kinesins that have been identified in humans. There are 14 groups that most of them fall into.3 However, there is a second family of motor proteins that move along a different structure, the actin filaments. These are known as myosins. While no myosins were depicted in the BioVisions video, narrow actin filaments were depicted crisscrossing the cell.

There are also a number of different members in the myosin family. They perform a variety of functions, from muscle contraction to transporting organelles within the cell. Recently a study was published that appears to give further insight in how motor proteins keep moving forward.4

Figure 2. A diagram depicting myosin traveling on an actin filament (after Shiroguchi, et al.). The power stroke decreases the angle between the leg and the foot, moving the molecule forward. The previous position of the leg is shown in gray. The recovery stroke increases this angle again to prepare the foot to bind in the forward position.

It has been understood for a while that ATP, the energy molecule of the cell, is used to take each step. There is a special place on each “foot” where ATP binds, is broken apart to release energy, and then the products are released so the cycle can repeat itself. As this cycle occurs, the angle between the “leg” and “foot” changes, and the “foot” can bind to or be released from the actin filament it is traveling on.5

Heading the right direction in a storm

At this point it might seem like smooth sailing, but things are actually a bit more complex. There are tiny molecules in the cell that bombard the motor protein from nearly every direction. The leg that is not attached to the actin filament gets knocked around rather mercilessly, a phenomenon known as Brownian motion. The combination of carrying a load and Brownian motion can cancel out much of the progress made by the power stroke. Certainly something else must be going on to keep the motor protein walking steadily forward.

The recent study involving myosin appears to have uncovered an important detail about a second critical element: the recovery stroke. This involves a change in the angle between the “leg” and the unattached “foot” back to the position it needs to be ready for the next power stroke (figure 2). The research is interesting because the researchers found a way to visualize this change in angle. It appears that this change puts the foot in the right position to bind the actin in front of the bound foot. If the “foot” touches down beside or behind the bound “foot,” it will not be in the proper orientation to allow it to bind.

A Testimony to an Ingenious Creator

Sometimes people will claim that science supports the idea that life came about by evolution, a belief based on the assumption that there is no Creator.6 In Darwin’s The Origin of Species, a mechanism was proposed that gave “natural causes” the credit for obvious design.7 Long before this, the Bible pointed out that people who wish to explain away God will always be able to find an excuse to do so, generally perceiving themselves to be wise in the process.8 I find the evolutionary arguments unconvincing since I am not willing to assume that no Creator exists.9

Learning new amazing details in biology tends to have two major effects on me. First, I am in awe of the wise Creator who designed such marvels and has allowed us to learn about them. The function of molecular motors is critical to life on earth, and God is obviously aware of all the microscopic details. It reminds me that I can trust Him with all the details of my life, because He cares for me.10

Secondly, especially as I continue to ask questions, I am reminded of how much we still don’t know. There are enough unanswered questions about molecular motors to keep many scientists busy for decades searching for the answers. This is an important aspect of science; it reminds us of how limited our understanding is and keeps us humble.11 This humility is important in doing good science as it keeps us from being so impressed with what we think we know that we miss the opportunity to learn more about the world around us. I consider it a key ingredient that keeps science fun.