Richard Dawkins: “Could We Overcome Our Taboo Against Cannibalism?”

Atheist Richard Dawkins is well-known for stirring the pot over at Twitter with his inflammatory tweets. He usually gets a largely negative reaction, with people alarmed or disgusted by what he says. But what they fail to realize is that Dawkins is usually being consistent with his atheistic worldview. And that’s the case yet again with his latest tweet, “Could we overcome our taboo against cannibalism?” 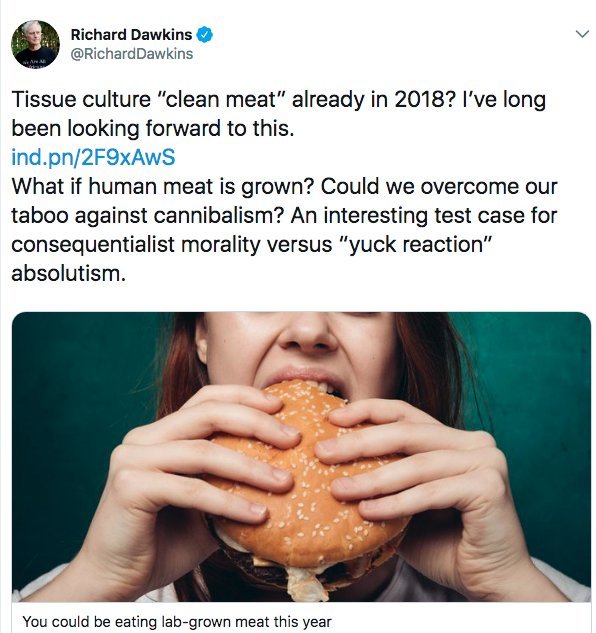 Dawkins was responding to a news article about meat grown in a laboratory, referred to as “clean meat.” This meat is grown from stem cells harvested via biopsy from living livestock. But Dawkins took this idea in a whole new direction when he suggested we could grow and consume human meat. In their comments, many people dismissed Dawkins’ statements as disgusting, though a surprising number agreed with him (some people even suggested eating young-earth creationists over their cat). Others tried to explain away his thoughts by appealing to health or cultural reasons.

Dawkins is being utterly consistent with his beliefs.

But Dawkins is being utterly consistent with his beliefs. He believes we’re all products of millions of years of evolution. He believes we’re just animals, really no different from cows, sheep, or pigs. So if we eat those creatures, why not eat human “meat” too? Especially if you don’t actually have to kill a human in order to harvest the “meat.” But, really, in his worldview, why should we care if we kill human “animals”? From an atheistic worldview, ultimately there’s no purpose or meaning in life.

Now such an idea is repugnant to most people—and for good reason! We intuitively know humans are different from animals. And that’s because we are. We were made in the image of God (Genesis 1:27). We’re not animals—we’re unique and hold a special value simply because we’re made in the image of God. No animals were made in God’s image; therefore humans aren’t “meat,” and our muscle was not created to be eaten. (Originally animals weren’t created as meat either as mankind and the animals were vegetarian [Genesis 1:29–30] but mankind was given permission to eat animal flesh after the Flood [Genesis 9:2–3]).

Secularists really don’t have a good moral argument against Dawkins’ disgusting statements. But when we start with God’s Word, we are able to authoritatively declare that his idea is morally wrong.

I discussed this item on Answers News yesterday with regular cohosts Bodie Hodge and Dr. Georgia Purdom. Answers News is our twice-weekly news program filmed live before a studio audience here at the Creation Museum and broadcast over my Facebook page. We also discussed the following topics:

Be sure to join us each Monday and Thursday at 2 p.m. (Eastern Time) on my Facebook page for Answers News. You won’t want to miss this unique news program that gives science and culture news from a distinctly biblical and Christian perspective.