Completing the “Circuit”—Testimonies and Reflections on Pittsburgh’s AiG Conference

After a year and a half of planning, the Answers in Genesis conference is history and today my well-worn file that reads “AiG” will be placed in CSF’s archive filing cabinet. 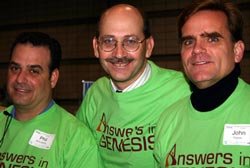 Reid Moon, author of this article, is flanked by CSF volunteer Phil McCaffrey and John Petrus in a photo taken at the Pittsburgh conference.

It’s the Monday after the conference [which was held November 19–20], and I am feeling a giddy sense of relief mixed with gladness and thankfulness. I’m reflecting upon this extraordinary weekend with the AiG staff, our volunteers and the thousands who attended at the David L. Lawrence Convention Center in downtown Pittsburgh, Pennsylvania, USA. And there is one fantastic testimony I really want to share with you toward the end of this brief report.

The idea to host a Pittsburgh AiG conference came in August of 2003, the Wednesday evening of the Fifth International Conference on Creationism (ICC) that CSF hosts every 4–5 years. Ken Ham of AiG had just finished speaking to a crowd of about 1,200 at Geneva College in Beaver Falls, PA. After talking with CSF board member Phil McCaffrey, Mr. Ham agreed to discuss the possibility of coming to Pittsburgh and present an AiG family conference for the entire region. The board of CSF then voted unanimously to make the formal invitation to AiG and agreed to help oversee the project.1

Our conference attendees came from all over Pennsylvania, West Virginia, Ohio, Maryland and New York. They were treated to professional-quality AiG presentations that not only taught the trustworthiness of Genesis, but also brought great theological and scientific insights to bear upon several topics of apologetics. 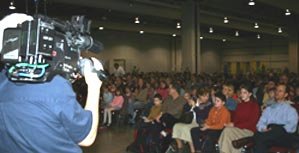 A crew from ABC’s “Nightline” program was on hand to film portions of the conference (air-date is still to be determined).

Ken Ham showed how the church in America has given the Genesis account of creation over to secular science. He called the church in western Pennsylvania to avail herself of the plethora of evidence that abounds in modern scientific research that supports special creation and a young earth, and also refutes Darwinian evolution.

Dr. David Menton’s Friday evening presentation of the intricacies and marvels of the human eye and ear captivated his audience of well over 1,000. His Saturday morning presentation of how a baby’s life begins and then grows in its mother constitutes a death knell to the naturalistic theory that advocates a blind chance and accidental explanation of human life.

Meanwhile, in children’s workshops for ages 4–6 and 7–10, about 250 students learned about fossils, dinosaurs and what AiG calls the “7 Cs of History.”

We have had many people express their appreciation for this conference. Perhaps the best to date is the following that was emailed to Mark Looy of AiG and forwarded to me.

I just wanted to extend my gratitude for AiG’s program [in Pittsburgh] and in particular for your two presentations. They were just what my son and I needed. In fact, Saturday night in our hotel room, my son gave his life to Christ! Praise be to the Lord and the AiG “sowers” for plowing the soil and throwin’ the seeds. Thank you.

Little did I know he was seeking the Lord, and in AiG’s meeting, he found what he needed. Ken’s material laid the groundwork (the “wire”), and your “Hearing Ear and Seeing Eye” talk completed the “circuit.” His logical, scientific mind, like mine, needed to sift through the biased, worldly interpretations of data and find the Christian view.

I would appreciate your prayers as he and I try to prepare the soil for my wife and daughter, through prayer and careful “discussion.”

In all, the AiG Conference was a great success for CSF. There were countless people who visited our tables who had never heard of the CSF ministry. We added nearly 100 new names to our “Origins Insights” newsletter mailing list (a record for any event!). And the church was built up and the large numbers of youth that attended were challenged with the eternal truths of Genesis, God’s creative activities and gospel of Jesus Christ.

I am still feeling a giddy sense of relief mixed with gladness and thankfulness. And I am smiling as I place this well-worn folder marked “AiG” into the archive file. I wonder when it will be brought out again.

To God be the glory!

Editor’s note: To find out how to host an AiG program in your area—and perhaps see a similar impact as to what was witnessed in Pittsburgh—go to Request an event.