Moving from the Vatican to the Bible-Upholding Museum

A new exhibit in AiG’s Creation Museum, part of an impressive travelling exhibition of rare Bible manuscripts and artifacts from the famed Green Collection, was dedicated this morning. Leading the dedication ceremony was Steve Green, Chairman of the Board of the future Museum of the Bible in Washington, DC, which has already collected more than 40,000 biblical antiquities. Mr. Green is the president of the retail chain Hobby Lobby. 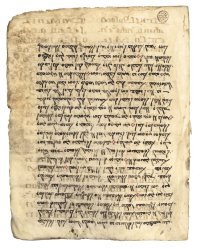 A portion of one of the oldest near-complete Bibles is now on display at the Creation Museum: the Codex Climaci Rescriptus.

Verbum Domini is the name of this Museum of the Bible exhibit. Some artifacts were on display at the Vatican earlier this year. Verbum Domini (“The Word of the Lord”) is made up of 27 valuable Bible-related items in an exhibit that celebrates God’s Word throughout the ages. By visually weaving together the story of the Bible throughout the ages, the exhibit honors the world’s most indestructible book. It also highlights the efforts of brave Bible scholars who lost their lives in the sometimes dangerous work of Bible translation.

Mr. Green joined Creation Museum/Answers in Genesis founder Ken Ham this morning to dedicate Verbum Domini. Green declared to the museum staff that whenever possible, he wants to encourage more people to read the Bible. 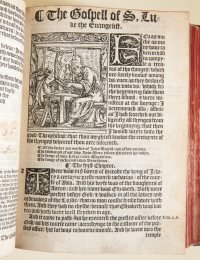 A well-preserved woodcut from a rare 1552 Tyndale New Testament.

Perhaps the most impressive manuscript in the exhibit, which had been on display at the Vatican over Easter and Lent along with other Verbum Domini items, is a page from one of the oldest near-complete Bibles in the world: Codex Climaci Rescriptus. It was produced in the 4th century AD in Aramaic, Jesus’s language.

Two other rare items now on display include a King James “HE” Bible (1611) and a Tyndale New Testament (1552, with woodcut illustrations). The Green Collection, funded by the Hobby Lobby chain of arts and crafts stores, will eventually be housed in the Museum of the Bible in Washington, DC. 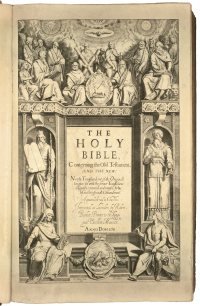 This morning at the Creation Museum, Green declared that he was glad to be partnering with the museum in a proclamation of biblical teachings. The day before, he observed that “we are like-minded. Our purpose in opening the Museum of the Bible and in loaning a part of our collection to the Creation Museum is to show visitors the value of the Bible in society. Also, our family’s love of the Bible motivated us to assemble this collection.”

Ken Ham stated: “Because the Creation Museum exists to declare the authority and accuracy of the Bible, we are thrilled to have this opportunity to exhibit a wonderful representation of the Green Collection and its future Museum of the Bible.” Ham continued: “This display coincides with a Dead Sea Scrolls exhibit to open soon at the Cincinnati Museum Center about 20 miles away. Visitors to our area can now be treated to two excellent displays related to the Bible’s preservation over the millennia.” 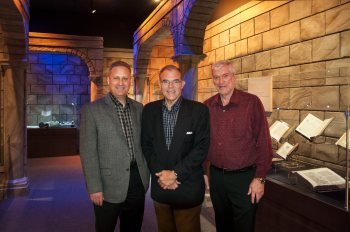 As a Bible-upholding center, the Creation Museum exists to show visitors that the Scriptures, from Genesis to Revelation, have been translated accurately over the years and that it is the Word of God. Ham stated: “Our Bible-affirming mission will be greatly enhanced by Verbum Domini. It is a fantastic addition to our museum.”

Green added: “I have visited the unique Creation Museum twice now, once with my family, and I am pleased this excellent museum can be enhanced with our Verbum Domini exhibit.” Mr. Green personally toured the new display this morning. 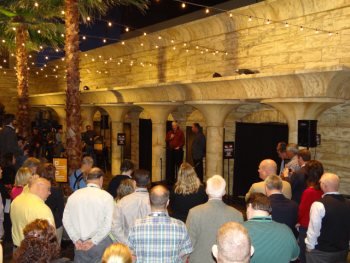 The Verbum Domini exhibit of rare Bible-related artifacts was dedicated this morning at the Creation Museum. Ken Ham and Steve Green are in the background and led the dedication.

The Museum of the Bible has recently acquired a building in Washington, D.C. which will be remodeled over the next few years, and will display perhaps the finest collection of Bibles and related manuscripts held in private hands. It was only three years ago that it purchased its first biblical artifact, and it has grown to over 40,000 biblical antiquities. The Museum of the Bible will also become a center of scholarly research.

To prepare for Verbum Domini, the Creation Museum converted its former collections area into an exhibit room, located next to the museum’s attractive Palm Plaza area. There will be no additional cost to view the temporary collection.

The Creation Museum and the Passages exhibition (the sister traveling exhibition of Verbum Domini and which is also a part of the future Museum of the Bible collection) are looking into a possible long-term relationship, with additional items to be placed in the Verbum Domini exhibit at the Creation Museum—and perhaps being changed out every six months or so. This would mean that every six months, visitors to the Creation Museum will have the opportunity to see new spectacular items from the Green Collection/Museum of the Bible.

For more information about Verbum Domini’s sister touring exhibit, Passages (currently in Charlotte, N. Carolina), plus the future Museum of the Bible in Washington DC, go to www.explorepassages.com.