A tale of two museums

Both the Creation Museum and the Smithsonian National Museum of History have impressive exhibits, but if you look closer, you’ll find an eternal difference.

In the past several months I visited two major U.S. museums. During the spring, I took a group of Liberty University students to Washington, D.C. to visit the famed Smithsonian National Museum of Natural History. Then, in the summer, my wife and I drove the 450 miles to visit AiG’s Creation Museum in Northern Kentucky.

Both museums had dinosaur skeletons, fossils, and a cast of “Lucy” the australopithecine (the supposed link between humans and an ape-like ancestor). Both museums had information about various animals. Both had videos to watch. But that is about where the similarities end.

The Smithsonian Museum of Natural History

At the Smithsonian, when you walk into the Hall of Mammals, you are invited with a sign that reads:

Welcome to the Mammal Family Reunion!
Come, meet your relatives.

Another sign declares: “Evolution is the biological process responsible for the magnificent diversity of life on Earth. Over time evolution creates new species.” (Yes, it really says that evolution creates!)

The entire emphasis throughout the museum is the “fact” of evolution—that all living things are related through common ancestry over millions of years. It is confidently presented as established scientific fact with no indication of the assumptions or fragmentary nature of some of the evidence. 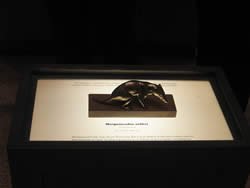 Towards the back of the Hall of Mammals, visitors can find four rectangular pillars, each of which says “Meet one of your oldest ancestors.” If you enter what I would call a “shrine,” you encounter what appears to be a bronze rat on an illuminated pedestal. Well, it is not a rat; it is a Morganucodon, and it’s supposed to be the ancestor of all mammals including bats, whales, bears, giraffe, kangaroos, and lions.

At the back of the hall is the Evolution Theater, where you can watch a fast-paced, child-oriented film about evolution. Of course, it emphasizes that mankind is related to chimpanzees, but it goes beyond that to include all mammals. One of the cartoon animals in the movie is a Morganucodon which the narrator says we should call “Morgie, because she is part of our family.” Later, she is referred to as “Great Grandma Morgie.”

Elsewhere in the museum are casts of skulls from Neandertals and Homo erectus. (Read some of our articles at Human Evolution that refute such “apemen” claims.) Above this is my favorite sign in the Smithsonian. I have taken pictures of it the last several times I have been there. The sign reads: 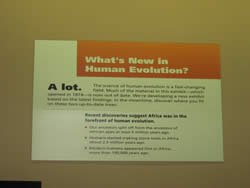 “A lot. The science of human evolution is a fast-changing field. Much of the material in this exhibit—which opened in 1974—is now out of date. We’re developing a new exhibit based on the latest findings. In the meantime, discover where you fit on these two up-to-date trees.”

A lot has changed since 1974—the year I started kindergarten.

To be fair, the Smithsonian is, in fact, working on a new human origins exhibit (according to their website). They are correct that the area of human evolution is a fast-changing field. Virtually every new fossil discovery triggers a major shake up of the human evolutionary tree. This includes several reports already from 2007.

All throughout the museum, the emphasis is on science with virtually no mention of anything religious—except for the sign in an exhibit on Africa that has this Jukun proverb from Nigeria: 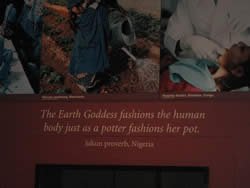 “The Earth Goddess fashions the human body just as a potter fashions her pot.”

The Creation Museum was a delightful sight compared to the Smithsonian. From the very beginning, the signs and exhibits explain the difference between scientific facts and interpretations. They emphasize the role of assumptions in how evidence is interpreted.

All of the exhibits are first rate. Although I had seen plenty of photos of what was in the Creation Museum, there is no comparison to actually seeing it first hand. I particularly enjoyed the Special Effects Theater and its movie Men in White. The film was a light-hearted look at how evolution is taught in science class. It also demonstrated how evolution teaching leads to confusion on the part of students who are trying to understand the meaning and purpose of life.

The museum’s walk through the 7 C's of History addressed many of the common questions and erroneous notions that people have regarding creation and the book of Genesis. The theme over and over again was how science—when rightly interpreted—affirms what the Bible teaches.

At the end of the Creation Museum tour guests come to the Last Adam Theater. This film plainly presents the gospel of Jesus Christ and explains why creation matters—it matters because it is a foundational part of the Bible and its gospel message. The Bible tells us about the origin of all things, how everything got messed up because of the sin of Adam (Genesis 3), and how Jesus Christ came to pay for it by shedding His blood on the Cross.

I encourage everyone to visit the Creation Museum and, if you can, bring a skeptical friend.