[Editor’s note: This article is a news release that has been slightly adapted for the web.]

With more than 1.4 million visitors expected to tour the life-size recreation of Noah’s Ark known as Ark Encounter its first year, the organization behind the attraction, Answers in Genesis, has just opened an online ticketing system to help manage the requests. With a nod to the number of days and nights it rained while Noah and his family were on the Ark, tickets will be sold for separate daytime or evening visits during the first 40 days of opening, starting July 7.

Meanwhile, excitement is building in northern Kentucky (south of Cincinnati) as the opening date nears, and workers at the Williamstown site are busy constructing the internal exhibit areas of the Ark now that the external shell is largely complete. As the largest timber frame structure in the world—510 feet long according to the dimensions specified in the Bible—the Ark Encounter is getting a lot of attention not just across America, but around the world. 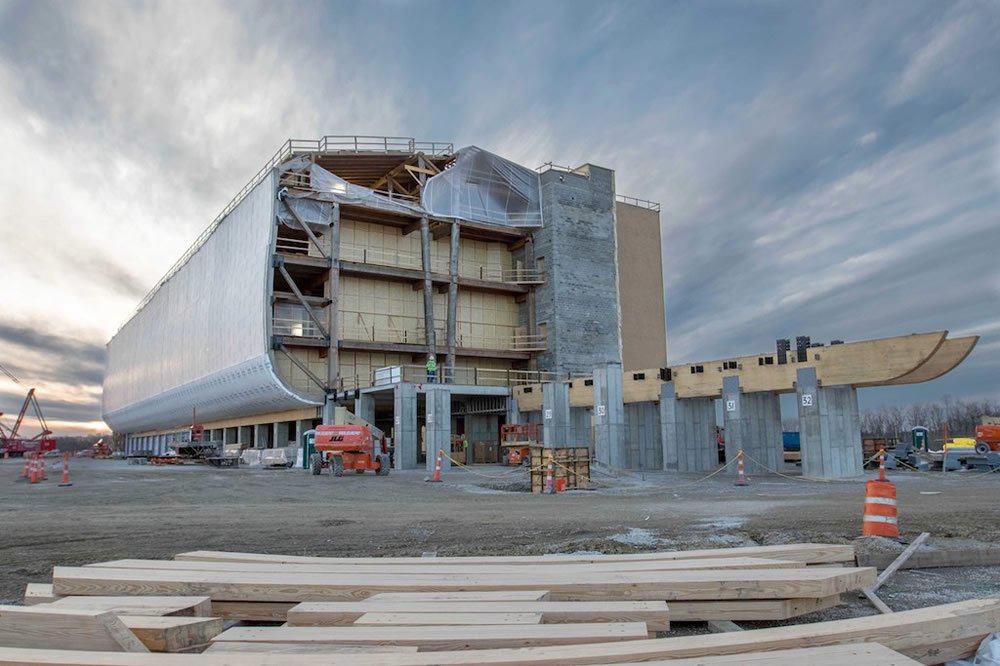 The Ark’s keel is now in place as 100 feet will be added to the Ark’s stern.

Ken Ham, president and founder of Answers in Genesis, is eagerly looking forward to the educational and evangelistic opportunity the Ark will be for so many thousands of guests expected to visit daily during the first forty days and nights. “Today, we don’t need another Ark to save animals and people from a global Flood,” Ham said. “But we do need another kind of Ark, to take people on what we are calling a ‘voyage of discovery.’”

While the Ark Encounter can accommodate about 16,000 guests per day, research has shown that more could be expected during the first few weeks of opening, especially during the summer time frame. This was the reason for establishing daytime entry tickets and nighttime tickets for the first 40 days.

For the first 40 days, guests can purchase daytime tickets for 9 a.m.–4 p.m. or nighttime tickets for 5 p.m.–midnight. The day and evening times will also offer some differing experiences. Tickets are $40 for adults, $28 for children, and $31 for seniors. Parking is $10.

Individuals who purchased a Charter Boarding Pass or donated to the Ark construction by sponsoring a plank or a beam had access to a priority ticketing period that occurred before the January 19 ticket offering was made to the general public. So far over $88 million of the $92 million has been raised through bonds, donations, and memberships.

While the decision is still pending on whether the Ark Encounter will be able to participate in the state’s sales tax rebate program for tourist attractions now being litigated, there is no doubt the project will be a boon to regional tourism, just as the Creation Museum, a sister attraction of the Ark, has proven to be in its eight years of operation. It is anticipated that thousands of new jobs will be created outside of the Ark theme park, and new hotels and other businesses are under development near the Ark site. New tax revenue to the state will be in the millions.

The Creation Museum in Petersburg, 40 miles from the Ark site, has been visited by over 2.5 million guests since opening in 2007. In the past two years, the museum unveiled a world-class $1.5 million exhibit of an allosaur dinosaur skeleton, and hosted the famous Bill Nye/Ken Ham evolution-creation debate (conservatively estimated to have now been watched by upwards of 15 million people).

The Ark website, with video and photos, is ArkEncounter.com.