Voting and the Ark

[Editor’s note: This article from 2016 shows that the principles of Christians’ duty to their heavenly citizenship remain the same, wherever they are. We pray this encourages believers everywhere to do what they can to shine the light of the gospel in a darkening world. We especially wanted to remind US voters of the importance of their duty as Christians and citizens to vote in every election with a biblical mindset, particularly this week.]

America is heading into a national election at a critical time in its history. The United States is on the precipice of a possible catastrophic change in regard to the Christian freedoms we enjoy in this nation. One leading politician pleaded with Americans to vote in such a way that left-leaning US Supreme Court Justices would be appointed, which would probably change this nation forever.

How should Christians approach voting in this strategic election?

As I thought about the upcoming election, it dawned on me that the reasons we built the life-size Ark in Northern Kentucky are based on the same principles we should apply when we vote.

Matthew 5 states that we are to be salt and light in this world. Christians are to affect the world for good as we apply Christian principles, teach God’s Word, and preach the gospel. We need to remember that, as Christians, we are really citizens of the kingdom of heaven, not the earthly kingdom in which we temporarily live. However, as citizens of a different kingdom, we still should do whatever is possible to affect our present earthly kingdom so that the truth of God’s Word and the saving gospel can impact as many souls as possible.

We built the life-size Ark to shine as a beacon of light, presenting God’s Word in a dark, sin-cursed world. When Christians go to the polls, we are given the opportunity to vote for those candidates we believe will best enable us to continue having as much freedom as possible to be light and salt in this world, as we need to be. This is particularly true today as we are seeing an increase of Christian persecution and the erosion of religious freedom and of the free exercise of religion guaranteed by the US Constitution and its First Amendment.

We read in Genesis 6:22–7:1: “Thus Noah did; according to all that God commanded him, so he did. Then the Lord said to Noah, ‘Come into the ark, you and all your household, because I have seen that you are righteous before Me in this generation.’”

When voting, we need to judge candidates against God’s Word.

Noah was righteous before God. His example is a reminder to us today that we all need to judge our hearts and behavior against the absolute authority of the Word of God. When voting, we need to judge candidates against God’s Word.

Living in this earthly kingdom, Christians should realize that no candidate will line up perfectly with the absolutes of God’s Word. But on a ballot, we can at least eliminate names of candidates whose beliefs are furthest from God’s principles. We should not vote for someone solely because they are an Independent, Democrat, or Republican. Christians should judge what candidates believe, say, and do against the absolute authority of the Word of God and vote accordingly.

In 2 Peter 2:5, we read that Noah was “a preacher of righteousness.” Noah was determined not only to obey God’s instruction to build an Ark, but also to preach the truth of God’s Word to the world. As Christians, we need to be active in preaching, and “to contend earnestly for the faith” (Jude 3). As part of our contending for the faith, I suggest we should be active in taking every opportunity we can (such as voting) to be an influence for good in this earthly world’s affairs.

As I read Scripture from Genesis to Revelation, over and over again I see God’s sovereignty and man’s responsibility going hand in hand. Yes, God is sovereign, and it is He, the King of kings, who “removes kings and raises up kings”(Daniel 2:21). At the same time, Christians are also told (Luke 19:13) to do “business” until He comes. In other words, we are to be doing the “business” of the King of kings to the best of our ability. This “business” involves contending for the faith, preaching the gospel, making disciples, and giving answers (1 Peter 3:15) for what we believe.

God ultimately will determine who becomes the next president of the US. At the same time, Christians need to be responsible citizens and use the legal means at our disposal to put those in power whose beliefs most closely align with the principles in God’s Word.

What More to Do?

One of the spectacular exhibits inside the Ark Encounter reminds all of us of how God’s Word can impact lives around the world. The leaders of the Museum of the Bible have placed an exhibit inside the Ark that shows how God’s Word has been taken to faraway places like China and my homeland of Australia. Each of its displays uses a real account of a person God has used to take the Bible’s gospel message to others. 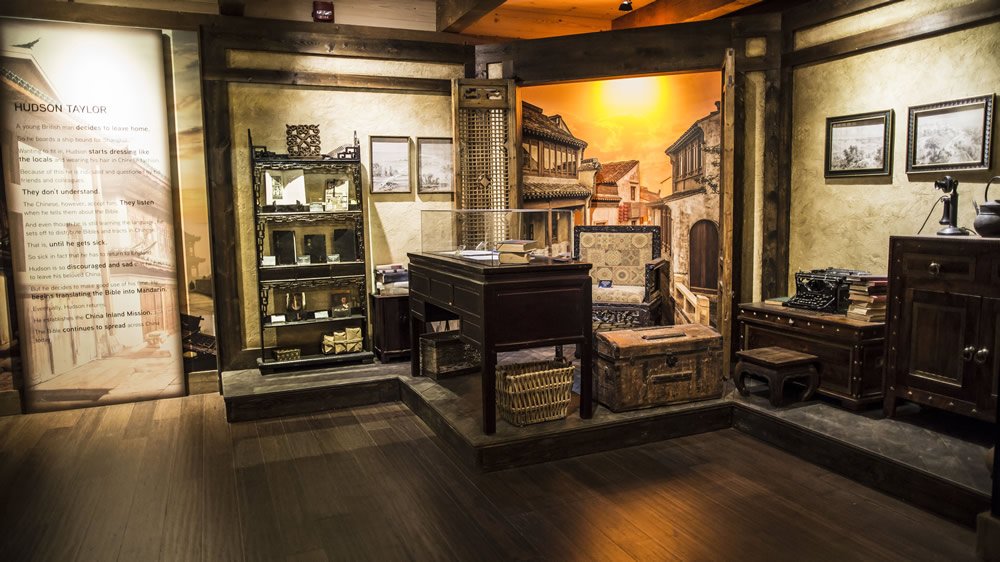 An exhibit inside AiG’s Noah’s Ark about bringing God’s Word to people groups around the world. This display, installed by the Museum of the Bible, is about sharing the gospel in China.

At the end of the exhibit, visitors come across a world map and a mirror. As guests look into the mirror and gaze at this global map, they are reminded that as Christians, we have a responsibility before the Lord to do what we can to influence others with the truth of God’s Word. All of us need to be challenged to be active Christians wherever we live and see lives impacted for the Lord Jesus Christ.

All of us need to be challenged to be active Christians wherever we live and see lives impacted for the Lord Jesus Christ.

Yes, God is already using the Ark Encounter in our culture to show people that God’s Word can be trusted from its very first verse. Millions have visited or heard of the Ark Encounter through the media because of advertising on major outlets and conducting countless interviews with reporters from around the world.

While the Ark is one of the most powerful ways we can reach this culture with the truth of God’s Word, we need more preachers of righteousness. Yes, the Bible does come to life at the Ark Encounter, and we are reaching guests with biblical answers and the gospel message. But we need you to join this effort and be salt and light, including casting your vote for those who will allow Christians to have as much religious freedom as possible so we can present biblical truths.

Let’s be like Noah and proclaim the truth of God’s Word to this spiritually needy nation and around the world.