A Year of Tremendous Blessings

Editor’s Note: While many secularists have spread falsehoods about the Ark’s economic impact in Northern Kentucky, the local newspaper from the county where the Ark Encounter is located has repeatedly given independent confirmation about the Ark’s success and the boon it has been to Grant County’s economy. That included a front-page article yesterday. The paper also printed the following AiG guest column in the Grant County News yesterday. 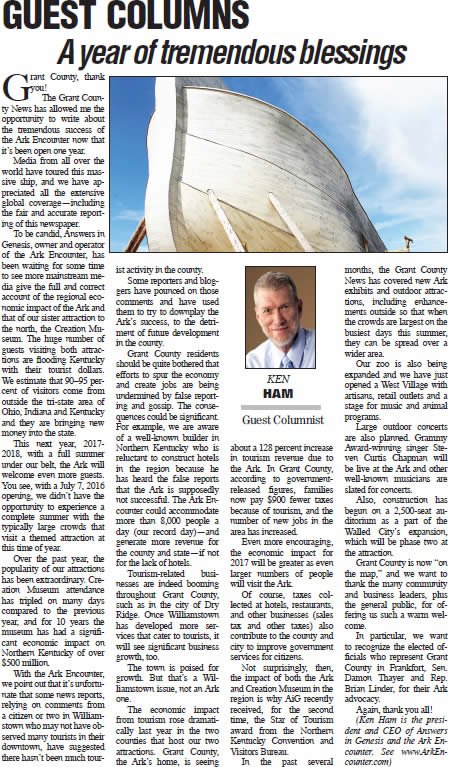 This guest column appeared in the Grant County News edition for July 6, 2017.

The Grant County News has allowed me the opportunity to write about the tremendous success of the Ark Encounter now that it’s been open one year. Media from all over the world have toured this massive ship, and we have appreciated all the extensive global coverage—including the fair and accurate reporting of this newspaper.

To be candid, Answers in Genesis, owner and operator of the Ark Encounter, has been waiting for some time to see more mainstream media give the full and correct account of the regional economic impact of the Ark and that of our sister attraction to the north, the Creation Museum. The huge number of guests visiting both attractions is flooding Kentucky with tourist dollars. We estimate that 90–95% of visitors come from outside the tristate area of Ohio, Indiana, and Kentucky, and they are bringing new money into the state.

This next year, 2017–2018, with a full summer under our belt, the Ark will welcome even more guests. You see, with a July 7, 2016, opening, we didn’t have the opportunity to experience a complete summer with the typically large crowds that visit a themed attraction at this time of year.

Over the past year, the popularity of our attractions has been extraordinary. Creation Museum attendance has tripled on many days compared to the previous year, and for 10 years the museum has had a significant economic impact on Northern Kentucky of over $500 million.

Over the past year, the popularity of our attractions has been extraordinary.

With the Ark Encounter, we point out that it’s unfortunate that some news reports, relying on comments from a citizen or two in Williamstown who may not have observed many tourists in their downtown, have suggested there hasn't been much tourist activity in the county. Some reporters and bloggers have pounced on those comments and have used them to try to downplay the Ark’s success, to the detriment of future development in the county.

Grant County residents should be quite bothered that efforts to spur the economy and create jobs are being undermined by false reporting and gossip. The consequences could be significant. For example, we are aware of a well-known builder in Northern Kentucky who is reluctant to construct hotels in the region because he has heard the false reports that the Ark is supposedly not successful. The Ark Encounter could accommodate more than 8,000 people a day (our record day)—and generate more revenue for the county and state—if not for the lack of hotels.

Tourism-related businesses are indeed booming throughout Grant County, such as in the city of Dry Ridge. Once Williamstown has developed more services that cater to tourists, it will see significant business growth too. The town is poised for growth. But that’s a Williamstown issue, not an Ark one.

The economic impact from tourism rose dramatically last year in the two counties that host our two attractions.

The economic impact from tourism rose dramatically last year in the two counties that host our two attractions. Grant County, the Ark’s home, is seeing about a 128% increase in tourism revenue due to the Ark. In Grant County, according to government-released figures, families now pay $900 fewer taxes because of tourism, and the number of new jobs in the area has increased. Even more encouraging, the economic impact for 2017 will be greater as even larger numbers of people will visit the Ark.

Of course, taxes collected at hotels, restaurants, and other businesses (sales tax and other taxes) also contribute to the county and city to improve government services for citizens.

Not surprisingly, then, the impact of both the Ark and Creation Museum in the region is why AiG recently received, for the second time, the Star of Tourism award from the Northern Kentucky Convention and Visitors Bureau.

In the past several months, the Grant County News has covered new Ark exhibits and outdoor attractions, including enhancements outside so that when the crowds are largest on the busiest days this summer, they can be spread over a wider area. Our zoo is also being expanded, and we have just opened a West Village with artisans, retail outlets, and a stage for music and animal programs.

Large outdoor concerts are also planned. Grammy Award-winning singer Steven Curtis Chapman will be live at the Ark, and other well-known musicians are slated for concerts. Also, construction has begun on a 2,500-seat auditorium as a part of the Walled City’s expansion, which will be phase two at the attraction.

Grant County is now “on the map,” and we want to thank the many community and business leaders, plus the general public, for offering us such a warm welcome. In particular, we want to recognize the elected officials who represent Grant County in Frankfort, Senator Damon Thayer and Representative Brian Linder, for their Ark advocacy.

Again, thank you all!