Three Exhibits in One

That headline is perhaps the best way to describe the amazing Ark Encounter theme park that opens July 7 south of Cincinnati. Startling exhibits, within an amazing exhibit, all within an awe-inspiring massive exhibit! What do I mean?

Awe-Inspiring Exhibit on the Outside

When I’ve taken people down to the construction site of the life-size Ark in Williamstown, Kentucky, many have exclaimed with something like, “I never realized Noah’s Ark was so huge! It’s awe-inspiring.” They begin to understand how Noah could fit all the representative land animal kinds on board, and they’re amazed!

Sadly, many people (even in the church) have been exposed to the childish “bathtub arks” we see in kids’ books and on the walls of Sunday school classes and so on that make Noah’s Ark seem like nothing more than a cute fairy tale. But once people see the enormity of this Ark structure, they will begin to realize it was a real ship.

The Ark structure itself is a teaching exhibit. But that’s a huge understatement, actually. At more than one-and-a-half times the length of a football field, plus half the width of a football field, built 15 feet off the ground and standing nearly 8 stories high, this huge teaching exhibit is a totally immersive experience where guests actually step inside this enormous wooden ship, our depiction of what is described in Genesis.

As I’ve taken people inside the Ark—a true timber-framed structure, the biggest in the world—the interior is a jaw-dropping experience for them. They say something like, “This is amazing. Simply amazing.”

These guests often stop in their tracks. They contemplate the massive beams and the craftsmanship. They talk to me about the obvious complexity in the Ark’s engineering and architecture. In doing so, they begin to think about Noah in a correct way. You see, many people have (even unwittingly) adopted an evolutionary view of history, thinking that ancient people were less intelligent and less advanced than we are today. They wondered how Noah could have built such an impressive ship.

From a creationist perspective, however, ancient people would have been highly intelligent. I believe that many were more intelligent than people today. For one, people lived much longer before the Flood, and they may have accumulated the knowledge and technology to build such structures that would be the envy today. Noah had incredible knowledge and the talent to do the task God called him to do.

Startling Exhibits on Each Deck

Within the great ship, there will be 132 exhibit bays on three decks, containing scores of startling exhibits. God has brought extraordinary talent to AiG: an outstanding team of designers, fabricators, sculptors, and other artisans.

Among the many teaching points, these exhibits will:

Here is a sampling of the exhibits, all within an amazing exhibit, and within one awe-inspiring exhibit: the massive Ark of Noah! 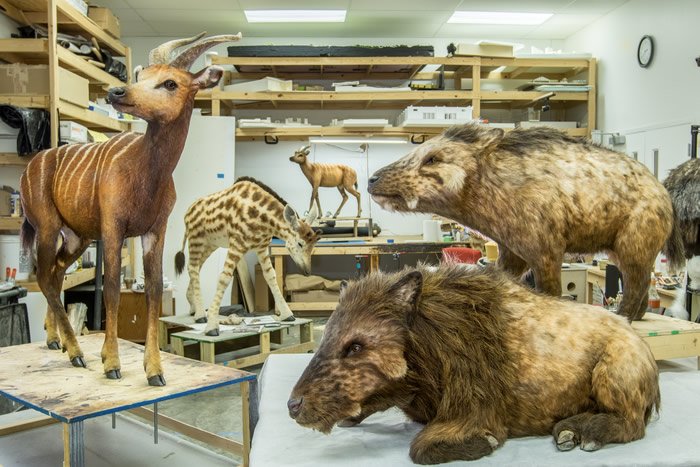 A part of an animal exhibit to go inside the Ark. 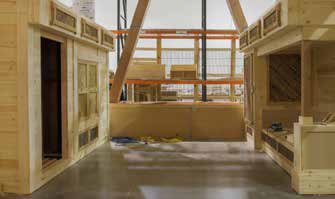 Noah’s bedroom is being installed on deck three of the Ark.

When I visit the Ark Encounter construction site and gaze at this new wonder of the modern world (and of the former world!), I ponder Genesis 6:22: “Thus Noah did; according to all that God commanded him, so he did.”

No wonder Noah is listed in what is sometimes called the believer’s Hall of Fame in Hebrews chapter 11!