Frozen Puppy, Dog, Wolf, or Something in Between? 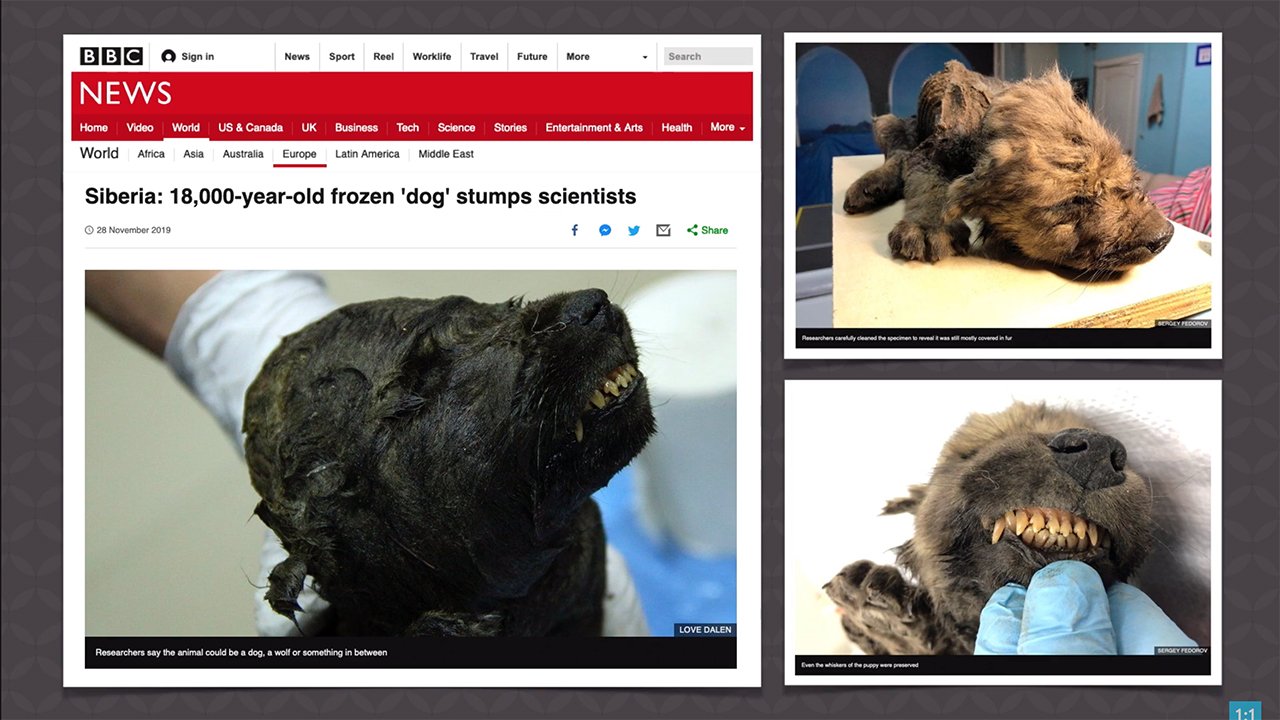 What exactly is it? That’s the question researchers are trying to figure out after the discovery of a frozen puppy preserved in permafrost in eastern Siberia. The two-month old canine was “remarkably preserved,” with fur, nose, and teeth still intact, even after a supposed 18,000 years. According to the BBC, scientists are wondering if this puppy represents an evolutionary link between wolves and dogs, or if it’s just a wolf or what we call a dog today.

Researchers sequenced the puppy’s DNA but were unable to determine whether it was a wolf or a dog. This suggests that perhaps it came from a population that was ancestral to both wolves and dogs. As they continue to research this puppy and his DNA, researchers are hoping to discover more about evolution. But does this little frozen puppy actually tell us anything about canine evolution?

Well, we know that wolves and domesticated dogs, as well as dingoes, coyotes, foxes, and others, are all part of the same created kind. They all belong to the same family, Canidae. The biological classification of family is the equivalent (in most instances) to the biblical kind. Creationists and evolutionists both agree that today’s wolves and dogs are descendants from the same ancestral population (we just disagree on the timeline!), and there’s abundant genetic evidence to confirm this. It’s just reproduction within a kind, as we’d expect when we start with God’s Word.

This puppy lived sometime after the flood and is therefore a descendant of the two representatives of the dog kind that were on the ark.

This puppy lived sometime after Noah’s flood and is therefore a descendant of the two representatives of the dog kind that were on the ark. It likely lived during the ice age, a harsh time in earth’s history that followed the flood, which explains why he was found buried in permafrost. This puppy is likely closer to the representative of the dog kind that was on the ark (and gave rise to wolves) and just reflects some of the created diversity within the DNA of that particular kind.

Of course, the puppy is not 18,000 years old. That date came from radiocarbon dating of one of his ribs, but radiocarbon dating (also known as carbon-14 dating) is based on unprovable assumptions. It has been shown to be untrustworthy and inaccurate for giving absolute dates. The puppy lived just a few thousand years ago at the most , which explains how he was able to be so well-preserved—with even delicate features like his nose still in place. Remember, Noah’s Flood was about 4,300 years ago.

I discussed this item today on Answers News with cohosts Dr. Georgia Purdom and Dr. Gabriela Haynes. Answers News is our weekly news program filmed live before a studio audience here at the Creation Museum and broadcast on my Facebook page and the Answers in Genesis Facebook page. We also covered the following fascinating topics:

Watch the entire episode of Answers News for December 9, 2019.