Why “Biblical Marriage,” Not “Traditional Marriage”? 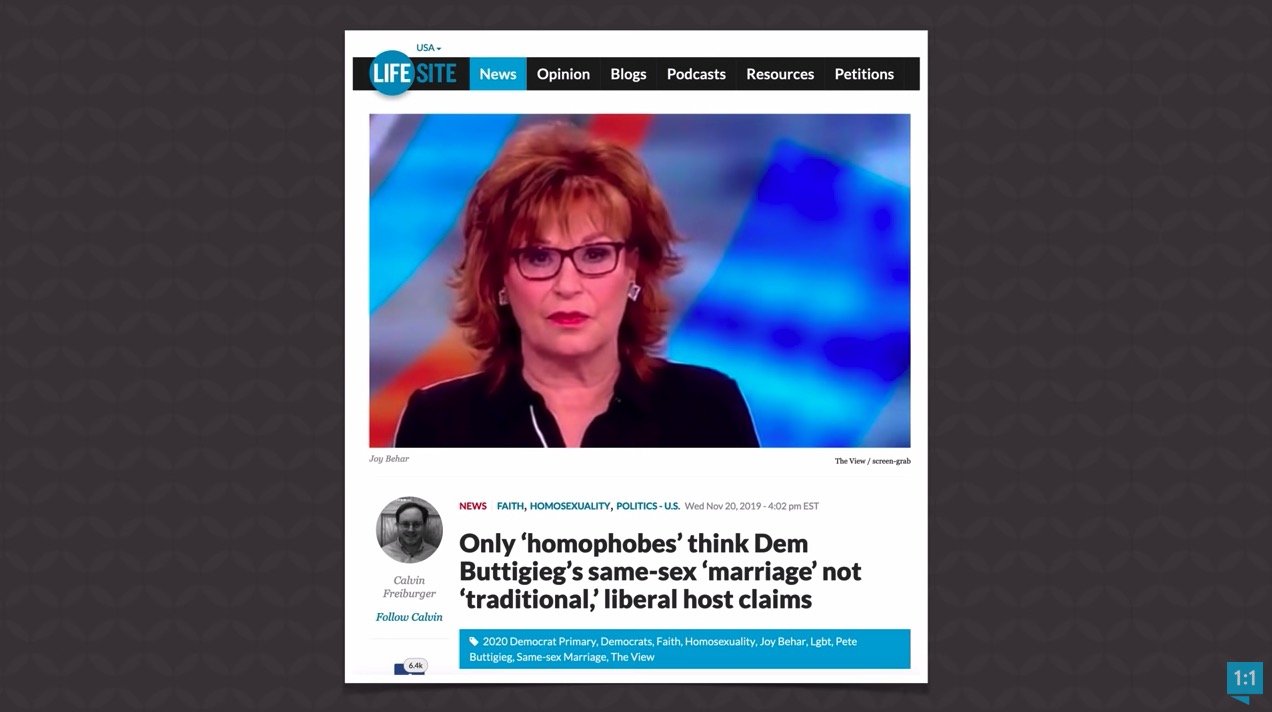 If you’ve been reading my blog for a while, you’ve probably noticed that I frequently write about marriage, starting with God’s definition given to us in Genesis 1:27 and 2:24. Marriage is under increasing attack, as nations redefine it to include the union of two men or two women. (This isn’t a marriage—marriage is God’s institution, so only he defines it.) When I write, I use phrases like “biblical marriage” or the “biblical definition of marriage,” not “traditional marriage,” as many others do. Why?

Well, a recent news item highlights why. One of the hosts of the TV talk show, The View, Joy Behar, was commenting on the gay “marriage” of Pete Buttigieg, one of the Democratic presidential candidates for the 2020 US election. She reportedly said,

People are excited about Buttigieg . . . He’s fresh, he’s new, he’s gay, he’s a serviceman, he served in Afghanistan. He’s married in a very—unless you are a homophobe, he’s married in a very traditional marriage, you know? Totally monogamous (emphasis added).

That should appeal to the silent majority out there, whoever they are.

Behar is defining a “traditional marriage” as simply a union that’s monogamous. Because there are only two people involved, it’s considered (at least by her standard) to be a traditional marriage. In a past news item, one LGBT activist complained that the Buttigieg’s “marriage” is redefining gay culture because their “marriage” is too “traditional,” since (among other things) Pete works and his “husband” stays home as a homemaker, just as many husbands work and their respective wives stay home. By the way, why do they have only two people in a gay “marriage.” The concept of two actually comes from the Bible. Gay “marriage” is a perversion of the original true marriage that God ordained—Adam and Eve, one man and one woman.

When most people say “traditional” marriage, they mean the standard, accepted definition of marriage throughout history—one man for one woman for life. But that’s now being turned on its head. After all, what’s traditional can change as traditions, cultural norms, and attitudes change (and that’s not always a bad thing unless what was “traditional” was more than just the standard but was also biblical).

What is biblical doesn’t change . . . We get our standard for truth from God’s unchanging Word.

What is biblical doesn’t change. Ultimately, we don’t get our standard for truth from tradition—that’s just a man-made authority. We get our standard for truth from God’s unchanging Word. In our culture today, it’s considered a norm—you could even say it’s almost traditional now to have sexual activity or even live together before marriage. But that doesn’t make it right! God’s Word—not our culture—determines truth, and God’s Word is clear that sexual activity is for one man and one woman united in the one-flesh union of marriage (e.g., Hebrews 13:4).

So, I say “biblical marriage” because God’s Word is the standard for truth, and that’s where I start my thinking in all areas. Cultural norms and traditions come and go, but the Word of the Lord endures forever (Isaiah 40:8).

I discussed this item today on Answers News with cohosts Dr. Georgia Purdom and Dr. Gabriela Haynes. Answers News is our weekly news program filmed live before a studio audience here at the Creation Museum and broadcast on my Facebook page and the Answers in Genesis Facebook page. We also covered the following fascinating topics:

Watch the entire episode of Answers News for December 9, 2019.