For the crowds who drift by the exhibit, the evidence seems pretty firm. Here is Lucy—the famed Australopithecus afarensis—staring thoughtfully into the distance. Her back straight, her eyes nearly human.

But like many such displays, this Living World exhibit at the St. Louis Zoo went far beyond the fossils that have been studied. When we look at those, the picture we get of Lucy is much different.

Most people don’t realize that the case for a human-like Lucy mainly depends on fossilized footprints. These impressions found at Laetoli in Tanzania are indistinguishable from human footprints you’d find on a beach. So, how do we know they weren’t packed down by Homo sapiens? According to evolutionists, they’re much too old.

You see, rather than question their dating methods, evolutionists believe these “human-like” footprints must be from the time before humans. Since humans weren’t there (in their scheme of history), they need something else that could have done it. And that’s where Lucy comes in.

When Lucy was discovered in 1974, the team found only 47 out of 207 bones. However, most of her hands, feet, and skull were missing. But that didn’t stop evolutionists from parading Lucy around as the one who could have tromped across Africa—or from portraying her hands and feet as nearly human. 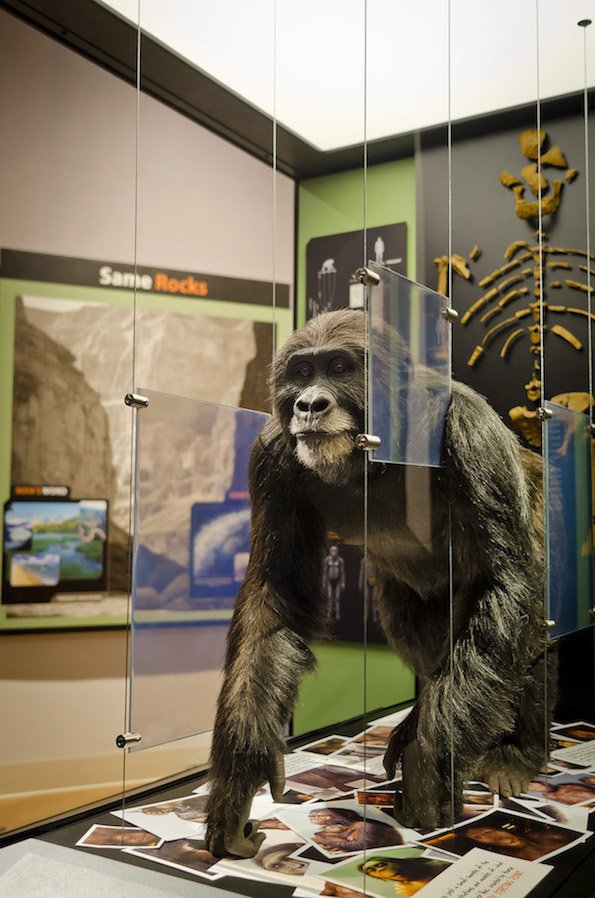 When we start from the Bible, a very different image of Lucy emerges. She was an amazingly designed ape, as this exhibit from the Creation Museum shows.

Since 1974, however, more bones have been recovered from other members of Lucy’s species. Her toes have been shown to curve like tree-dwelling apes; her shoulders have been found to be nearly identical to living great apes; her wrists resemble those of other knuckle-walking ape species; and her hands—far from being like human hands—are similar to those of chimpanzees. In other words, she was an ape—a tree-climbing, knuckle-walking, amazingly designed ape.

Like most things in historical science, so much depends on the starting point. Evolutionists over-emphasize human characteristics in the fossils and produce reconstructions of Lucy that stretch (literally) what has been found. They believe evolution happened, and they build from there.

But if we start from the Bible—the historical record of the universe that God gave us—we get a different perspective. The Bible says that God created apes and humans as distinct kinds on Day Six of the Creation Week about 6,000 years ago. So, Lucy isn’t one of us—just as her fossils show. In fact, when we start from that perspective, we realize that Lucy likely appeared much more like a small gorilla—or perhaps a chimpanzee.

So, the next time you’re faced with a philosophical Lucy staring into the distance remember this lesson. You’re not looking into history; you’re looking into evolutionary interpretation.

Get Answers about Lucy