Not Your Ordinary Ground Graffiti

If you’ve heard of these geoglyphs, you know they’re quite the mystery to archaeologists and most other experts. Discovered by accident from an airplane in 1927, their purpose remains a conundrum.

It’s a bird! It’s a monkey! It’s a whale? Wait, no. It’s all of the above! It’s the Nazca Lines! The what? If you’ve heard of these geoglyphs, you know they’re quite the mystery to archaeologists and most other experts. Discovered by accident from an airplane in 1927, their purpose remains a conundrum. Plenty of fantastical and plain ideas abound from UFO landing zones to religious rituals. Who knows? Maybe it was some rebellious Nazca teen’s version of graffiti. One thing is sure. The complexity of these lines defies the evolutionary assumption of primitive ancestors.

What are the Nazca Lines? 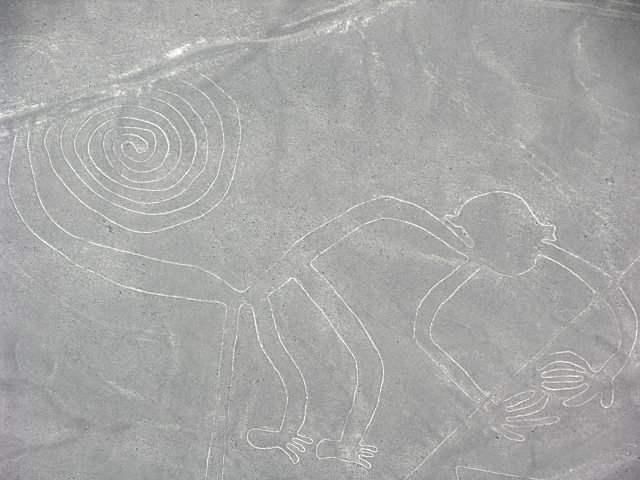 The name “Nazca Lines” pretty much says it all. But what’s so special about a bunch of lines? The Nazca Lines are geoglyphs—huge pictures or hieroglyphs that are formed by digging trenches or building up earth. Geoglyphs are so long that what they depict can usually only be seen from an elevated point. From the ground they can just look as though someone was a little tired and dragged his plow all the way home from the field. As a matter of fact, many of these can even be seen using Google Earth. Just type in “Nazca, Peru,” fly in a little closer, and you’ll see some incredible things.

The most popular parts are the many animal drawings, like a monkey, a few birds, whales, and an unmistakable spider. From the ground it would be nearly impossible to tell what the figures are, but from the air their form becomes quite clear. Also, there are many trapezoids, spirals, “runways,” and straight lines.

The trapezoids are usually larger than a football field, and they appear to be placed randomly. “Runways” are not literally runways; they just look as such. And some of the lines are spirals or zigzag patterns. Though a straight line seems like an unimpressive feat, how about a nearly perfect straight line that goes on for miles without curving or being thrown off by obstacles such as hills? And these are seen all over the desert. Many of the straight lines have a tendency to trace back to a radiant point—a point from where groups of lines emanate. 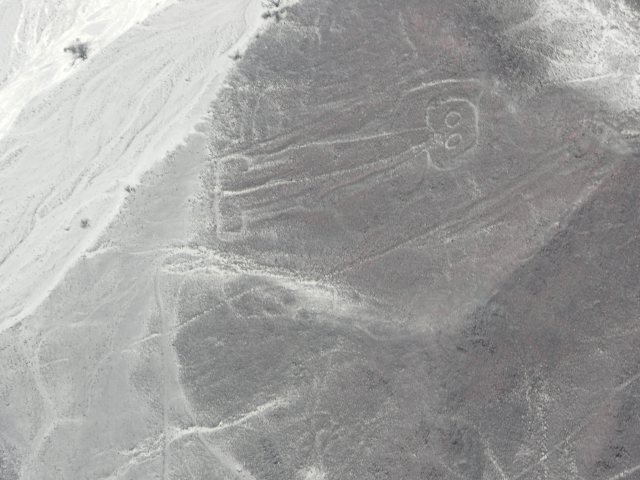 The Nazcas thrived, it is believed, from the first century to the early eighth century AD. They lived near and around the desert areas of southern Peru. The lines and figures weren’t the only things they constructed. Because they lived in a very dry climate—maybe an inch of rain per year, they also constructed many wells and aqueducts to help channel the water for irrigating their crops. Many of these wells and aqueducts still exist and function today—talk about quality workmanship!

It is believed that the Nazca Lines were created by the ancient Nazca people sometime between 1 and 650 AD, though they were not all created at the same time. Most dating for the lines is based on wooden stakes or broken pottery pieces nearby. While this method can give us an idea of when they were possibly constructed, it is not absolute. The lines could be much older. This would be like dating a piece of trash found next to a trail and then using that to date the trail. The only problem is that the trash could be a year old and the trail hundreds of years old. Though this method is not perfect, it does help to give a minimum age for the lines. 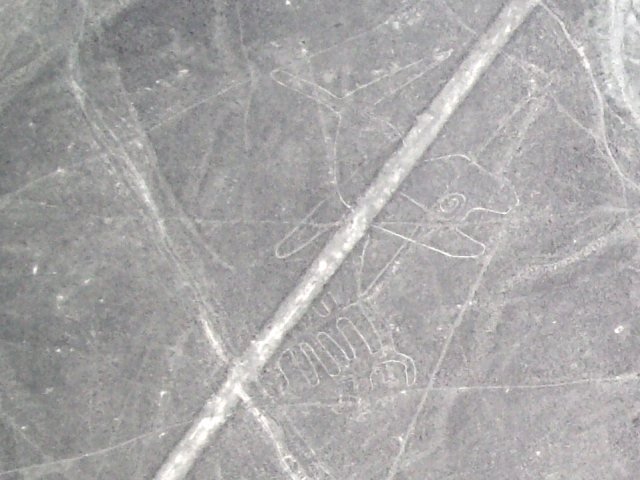 Unfortunately, the prevailing thought is that the ancient Nazcas were primitive and so had no advanced technology. Thus, a few people believe that aliens were responsible. However, this explanation is rejected by most experts since there is no evidence, and the idea is completely unnecessary. Many people have studied the Nazca Lines and have even recreated some of them. While the lines and designs are not so advanced that they would have needed help from a higher intelligence (i.e., aliens), neither are they so simple that any primitive man could chalk one up.

Some have even ranked the lines in an order of complexity. The idea is that they started with straight lines, and then, as their knowledge of geometry grew, so did the complexity of the shapes—trapezoids, zigzags, spirals, and then finally animal and plant shapes. But this idea is based on the assumption that the Nazcas had no prior knowledge of geometry and/or land surveying. However, this is an unfounded assumption based mostly on evolutionary presuppositions. 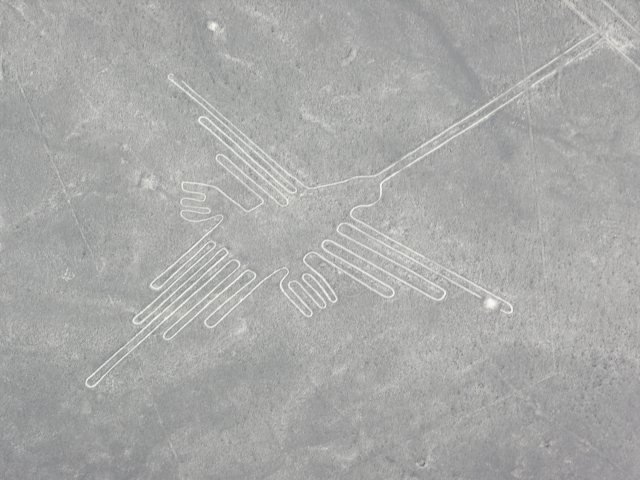 The lines were simply formed by scraping the darker pebbles and rocks that lay atop the desert floor away from the lighter clay soil underneath. These geoglyphs have remained nearly untouched for centuries due to the fact that there is very little wind and rain. As for the straightness of many of the lines and geometry of the spirals and animals, some simple land surveying equipment could have been used. For example, ropes and stakes, triangles and plumb lines can be used to help construct straight lines over long distances.

Also, many ancient cultures have been credited with having impressive mathematical prowess, and the Nazcas, no doubt, were one of them. Even though we know they are responsible for the lines and shapes, we don’t know exactly how they formed them. From the precision of the lines and figures, we can ascertain that they had the necessary tools for surveying and construction and also had in-depth knowledge of mathematics and geometry. 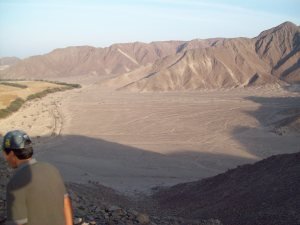 Further evidence that the Nazcas knew what they were doing is supported by what is seen in an area outside of the town of Nazca. Upon viewing, one can see this was used as a practice area where they looked from the surrounding mountain tops to view the lines below. Some have even speculated the Nazcas could have used hot air balloons. In the 1970s Jim Woodman theorized that the Nazcas had the knowledge and materials to build one. So he and ballooning expert Julian Nott set out to construct the world’s “first” hot air balloon, using only materials the Nazcas would have had access to, such as totora reeds, cloth, and rope. In 1975 in the desert pampa1 of Nazca, Peru, Woodman and Nott took flight and achieved an average altitude of 300 feet. Though they did not prove the Nazca used hot air balloons, it at least became plausible that the Nazcas could have. Such a tool would have been very helpful in the construction of the lines and figures. 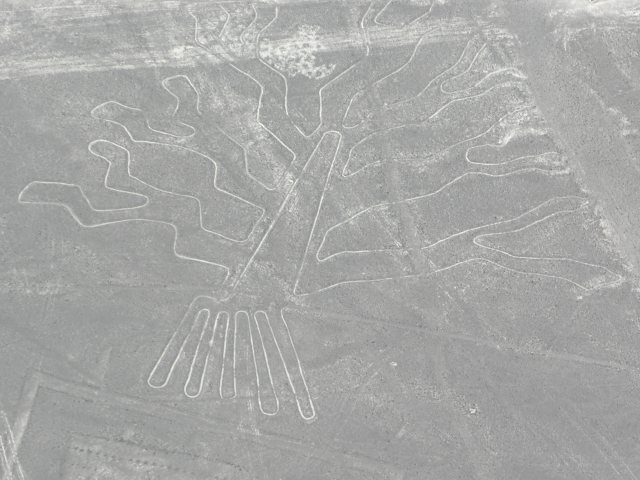 When Paul Kosok came across the lines in 1941, he came up with the idea that the lines pointed to star constellations so that farmers could predict the underground flow of water that came from the Andes Mountains. Since their initial (re)discovery, many theories have come about as to their purpose: a celestial calendar, a form of artistic expression, roads for trade and travel, indicators of ground water, and religious rites pertaining to the worship of mountain-gods and the provision of water.

As for an astronomical calendar, only a few lines have been shown to track the rising and setting of the sun to keep track of the rainy season. But other than these, few scientists and researchers have been able to make any certain connections between the lines and the positions of the stars. It is possible, though, that the plant, animal, and other pictures represent constellations.

The pampa was (and still is) fairly dry due to the lack of rainfall. This is because of the Andes Mountains. As water vapor travels up over the mountains, the majority of it tends to fall on the mountains. Because of the height of the mountains, the air becomes very thin and cold, thus causing most of the remaining water in the air to precipitate and fall on the mountains. All that’s left for the valley is dry air. Some of this water, however, ends up in underground channels that flow from the Andes to the desert. So some have speculated that certain formations, like the trapezoids, were used as indicators as to where the underground water sources were located. Although interesting, this model is not widely accepted. 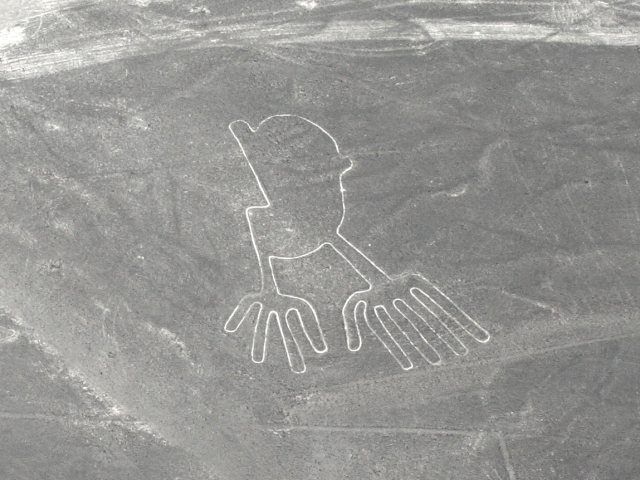 Probably the most plausible and accepted idea is that the lines were used for religious ceremonial purposes, especially the trapezoids and figures. Since this was a dry climate, it is believed the Nazca constructed these lines and figures as tools for ceremony and worship. For example, it was noted by Anthony Aveni that “the large trapezoids attached to the lines seemed to be situated in the spits of elevated land in between the ancient streambeds. Often the axes of the lines are parallel to the direction of the flow of water.”2 He goes on to explain that since these were usually situated next to waterbeds they were probably places of worship and prayer. It can also be observed that many of the straight lines emanate from elevated radial points. It’s possible these “center points” were focal points of worship and sacrifices.

Religious rites and ceremonies for the geometric and animal shapes seem to make the most sense. One possible connection may be between the spiral geoglyphs and the wells that were dug by the Nazcas. A quick look at the wells shows how they spiral downward into the earth to the water. The spiral geoglyphs could possibly be an artistic and ritualistic representation of their wells.

Archaeology serves as a useful teaching tool. Those in the field understand the difference between facts and interpretations. Archaeologists and other scientists look at the lines (evidence/facts) and then interpret their purpose: “religious ceremonies,” “they were roads,” “they marked underground water,” and so on. But they usually keep their minds open since not all the facts are known because no one was there to witness the lines being formed and ask the Nazcas why they were doing it. As new information arises, certain theories are disproven, and certain theories are given further credence. But most archaeologists, if not all, will admit that there is no way to know absolutely and exactly what the purposes of the Nazca Lines were since we don’t have all the information. This honest and candid approach to archaeology is what science should be about. Unfortunately, this open-minded approach is rare in evolutionists when it comes to their dogmatic (religious) stance on the history of the earth.

When taking a closer look at the Nazca Lines and putting aside arrogant evolutionary bias, it becomes clear the Nazcas were not primitive at all but rather intelligent civil engineers. Once we take a step back from our preconceived notions about earlier mankind, we see they were ingenious. To read more examples of our not-so-dumb ancestors, I recommend reading Donald Chittick’s book The Puzzle of Ancient Man. The next time you hear about how ancient man was primitive, just remember, our minds have undergone more than 6,000 years of the debilitating effects of the Curse, so those who came before us had a much greater capacity for intelligence than ourselves.