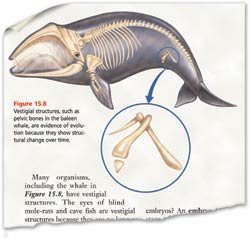 Almost every secular biology textbook today includes a section on vestigial structures—structures that are supposed remnants from ancestors that have lost their original function or capacity. This teaching is based on an assumption that is then passed off as science, an assumption that the ancestry and function of the structure is known. But using observational science, it is impossible to identify exact ancestors or even the exact function of structures because observational science deals only with things that are observable in the present.

The figure on the left shows the supposed vestigial pelvis of a whale. Even though it has a clear reproductive function, evolutionists call it a left-over from a time when whales walked on land. The caption under the figure says that the pelvic bones “show structural change over time.” A bone itself cannot show structural change—that change must be inferred from the assumed ancestors and assumed ancestral function. This is a textbook example of assumption passing as fact.