The Romeikes are seeking asylum in the U.S. because Germany prohibits homeschooling.

No, this isn’t an old headline ripped from a newspaper of the 1930s. It’s a summary of the plight of Christian homeschoolers, the Romeikes, a German family seeking asylum in the U.S. because homeschooling in Germany violates the law. The German government says it prohibits homeschooling to “counteract the development of religious and philosophically motivated parallel societies.”* 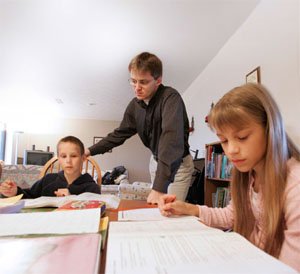 The Romeikes are seeking asylum in the U.S. because Germany prohibits homeschooling. “Other people have other burdens. We have this one. But we know that God is with us and going before us.”

How could a modern nation that once endured Nazi and East German totalitarianism see its own republican-minded supreme court rule that the state can remove children from parents who homeschool them? The state even sent police to escort the Romeike children to government schools. The family decided to flee their country and seek the protection of what they thought was a freer nation: the USA.

A Tennessee judge granted the Romeikes asylum, but the U.S. Attorney General’s office appealed, seeking to deport the family to Germany. The government argues, among many things, that if the Romeikes would only change their minds, they would no longer be persecuted in Germany. In May, the Sixth Circuit Court of Appeals ruled 3–0 against the Romeikes, accepting the government’s argument that if a country prohibits everybody from doing something, then nobody’s rights are being violated because everybody is being treated equally!

If the Romeikes are deported, the implications are frightening. Not only homeschoolers in the U.S. but also Americans in general might find their religious freedoms challenged by the thought police who are increasingly taking over government.

The Romeikes’ case is being appealed further.