Labor Day: Why Do We Celebrate Work?

Today families are relaxing and celebrating Labor Day (or Labour Day) together across North America with camping or beach trips, barbeques, parades, or (in my family at least) some good old-fashioned labor in the backyard as they mark the end of summer. This first Monday of September is a federal holiday in both the United States and Canada. Labor Day is also celebrated in many other countries around the world on different days of the year, often in May.

Labor Day: Where Did It Come From?

Labor Day has its roots in the labor unions. We take our eight-hour workday, good work conditions, breaks, and minimum wage for granted today. But it wasn’t always this way. Many in the working class, especially those in factories, were often required to work long hours in terrible conditions for very little pay and often at shockingly young ages. Since factory workers were not skilled laborers and were easily replaced, it was hard to complain about conditions without being dismissed. Labor unions eventually were formed to help abolish these poor working practices and to demand the working class be treated fairly.

The first Labor Day “parade” was held in Toronto, Canada, on April 14, 1872. In an attempt to secure a nine-hour workday, 10,000 laborers went on strike and marched through the city streets. They were unsuccessful in their ultimate goal at the time, but this parade and strike did result in the decriminalization of unions, and other Canadian cities started demanding a shorter workweek, which they eventually were granted. This first “parade” became an annual tradition, and in 1894 Labor Day became a national holiday.1

Now, despite being a relatively recent holiday, the exact origin of this day in America is not completely agreed upon. Everyone agrees the first Labor Day in the United States was celebrated with a parade in New York City on September 5, 1882. The state of Oregon was first to approve legislation making it a holiday in 1887. Other states quickly followed. However, who first proposed the holiday for workers is much more contentious. 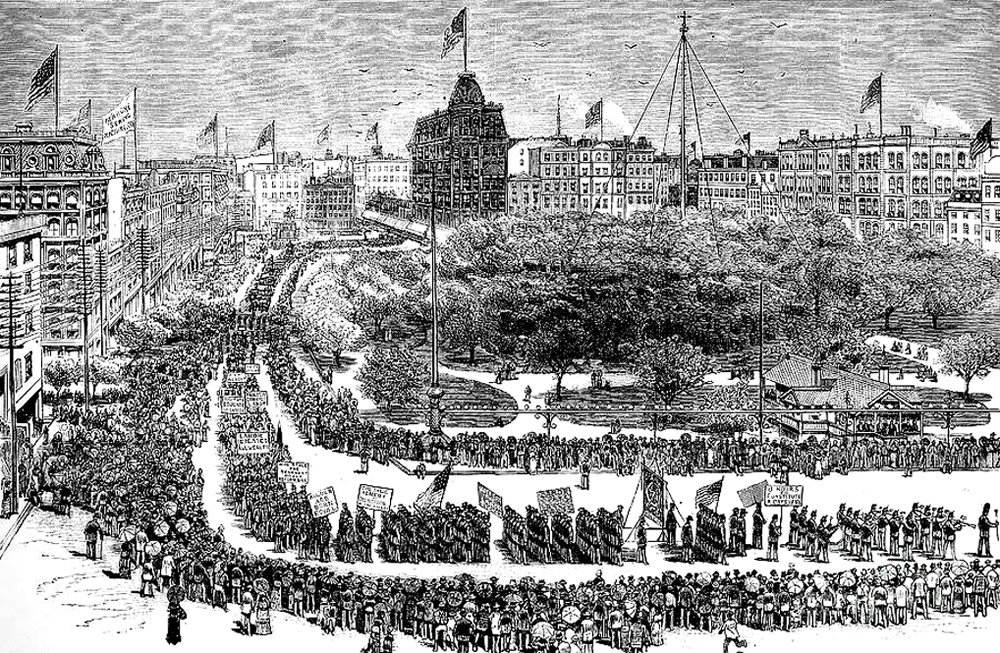 Some say union activist Peter McGuire was the founder of the American Labor Day but that he got the idea from his northern neighbors. Supposedly he spoke at a Canadian labor festival in 1882, decided America needed a workers’ holiday, and proposed the idea to a New York labor union.2 But others think that Matthew Maguire, a machinist, should be recognized as the founder of the holiday. Supposedly he proposed the idea, also in 1882, while serving as secretary of the Central Labor Union in New York. Either way, regardless of which McGuire/Maguire is behind Labor Day, it was first celebrated when the Central Labor Union organized a parade in New York City in 1882. This holiday is meant to be a “workingmen’s holiday”3 and a celebration of the fight for fair working conditions. In recent years, it has become more of a tribute to the social and economic achievements of American workers.4 It became a national holiday in 1894.

Work—a Blessing or a Curse?

When many of us think of work, we think of it more as a curse than a blessing. It’s something (usually exhausting) that we have to do if we want a paycheck, a clean house, food to eat, or a tidy backyard. But what does the Bible teach us about work?

Work was “very good” in the beginning.

Well, starting with God’s Word, we know work is not a curse. Even before Adam and Eve rebelled against God at the fall, there was work that had to be done. After God finished fashioning the garden of Eden for Adam and Eve, “the Lord God took the man and put him in the garden of Eden to work it and keep it” (Genesis 2:15). Adam and Eve were also commanded to “fill the earth and subdue it” (Genesis 1:28), implying work as they cultivated and cared for the plants and animals. At the end of day six of creation week, God looked at everything he had made—including the garden and the man created to tend it—and declared everything was “very good” (Genesis 1:31). Work was “very good” in the beginning.

What happened? The words “very good” don’t often come to mind when we face a tight deadline or manual labor on a hot day. Well, Adam and Eve rebelled against God and introduced death and suffering into creation. Part of the punishment for sin was that the ground was cursed. God said to Adam,

Cursed is the ground because of you;
in pain you shall eat of it all the days of your life;
thorns and thistles it shall bring forth for you;
and you shall eat the plants of the field.
By the sweat of your face
you shall eat bread,
till you return to the ground. (Genesis 3:17–19)

Work was no longer pleasurable and easy, a joyful way to worship the Creator. It was difficult, as toil and sweat became the sacrifice for food and shelter. Work, like everything else, was cursed because of sin.

How Should Christians View Work?

Just because work is cursed and therefore difficult does not make it something that we should avoid at all costs. Over and over Scripture speaks out against laziness.

Whoever is slack in his work is a brother to him who destroys. (Proverbs 18:9)

We are not to be lazy, but rather are to work as though we are serving the Lord.

Whatever you do, work heartily, as for the Lord and not for men. (Colossians 3:23)

Paul frequently admonishes his readers to work hard and not be idle (Ephesians 4:28; 1 Thessalonians 4:10–12; 2 Thessalonians 3:6–12; 1 Timothy 5:8). Working hard should be a trait that characterizes Christians as we work to serve our Lord wherever he has put us.

As much as we don’t like work as sinful human beings, there is a huge temptation to try to work for our own salvation.

As much as we don’t like work as sinful human beings, there is a huge temptation to try to work for our own salvation. This is easily seen by surveying the major world religions; with the exception of biblical Christianity, every religion depends on what man can do to appease a god or gods, save himself, or make his life better. In these religions, you must do enough good deeds, follow enough rules, or give enough money to secure your salvation (and even then salvation is by no means secure in many religions).

But biblical Christianity is very different. Jesus invites us to, “Come to me, all who labor and are heavy laden, and I will give you rest. Take my yoke upon you, and learn from me, for I am gentle and lowly in heart, and you will find rest for your souls. For my yoke is easy, and my burden is light” (Matthew 11:28–30). We are invited to come and rest in the one who declared, “It is finished!” (John 19:30).

We cannot work hard enough to earn our own salvation (Ephesians 2:9). Because of our sin in Adam, we all deserve death (Romans 5:12, 6:23). But Jesus Christ stepped into history, lived a sinless life, and chose to take our sin upon himself (2 Corinthians 5:21), dying in our place. He rose from the grave, defeating death, and now offers new (2 Corinthians 5:17) and eternal life (John 3:16) to all who will believe (Romans 10:9).

This gift of salvation is a free gift. Our own righteousness is dirty rags to God (Isaiah 64:6), but Christ, who fully paid our penalty as the perfect sacrifice, offers salvation as a free gift. Ephesians puts it this way, “For by grace you have been saved through faith. And this is not your own doing; it is the gift of God, not a result of works, so that no one may boast” (Ephesians 2:8–9).

Though work is a good gift from God, it is under the curse. Those who have placed their faith and trust in Christ can look forward to a day when the curse will be no more (Revelation 22:3) and work will no longer be a trial to endure or a toil of sweat. If you have not found the rest that comes from trusting in Christ for salvation, stop toiling and accept his free offer of salvation. Then you too can look forward to the coming day when the curse will be lifted, and we will enjoy Christ for eternity.