Eroded Appalachian Mountain Siliciclastics as a Source for the Navajo Sandstone

Recent studies have identified the provenance of the Navajo Sandstone by age-dating zircons contained within the formation. However, an alternative interpretation is possible.

Siliciclastic deposits (silica-rich detrital sediments) are common components of the earth’s sedimentary record. However, the source area, or provenance, of many of these stratigraphic units is not known. Recent studies have identified the provenance of the Navajo Sandstone by age-dating zircons contained within the formation (assuming the uniformitarian geological column). The resulting date range was then correlated to mountain-building episodes for both the ancestral Rocky Mountains and Appalachians. The studies concluded that the Appalachian Mountains contributed a significant portion of siliciclastic material via a prehistoric river that drained the eastern North American continent and flowed to the west. The resulting fluvial/deltaic deposits were later windblown south/south-east.

However, an alternative interpretation is possible, if the sandstones can be linked to the Appalachian Mountains by greater evidence than the radiometric dating of zircons. The sheer size and lateral extent of the Navajo Sandstone is best interpreted within the context of the Flood. Sedimentary material derived from the uplifting Appalachian Mountains may have been transported, sorted and deposited in massive sandstone layers during the Middle Flood Division of the Flood Event Timeframe.1 The Navajo Sandstone would then testify to the power and energy of the Genesis Flood.

The Navajo Sandstone covers an estimated 400,000 km2 of the western United States.3 Historically, non-creationist scientists assigned this formation4 to the early Jurassic and interpreted the high-angle cross-beds as eolian (formed by wind) deposits originating from a possible source area to the north-north-west5. Based on the direction of the cross-beds within the sandstone, they speculated that the source of the sand was the ancestral Rocky Mountains.

The source and age of siliciclastic materials found within the southwestern USA has been the subject of several recent investigations.6,7,8 While the exact ‘age’ of the Navajo Sandstone has not been decided, the source of the sand is now believed to be known. Radioisotope dating methods applied to zircons in the sandstone points to the Appalachian Mountains as the source for much of the sands comprising the Navajo Sandstone.

A recent study9 proposed that a system of rivers, with headwaters in the prehistoric Appalachian Mountains, transported siliciclastic material to the early Jurassic western shore of North America, northward of any topographic obstruction formed by the ancestral Rocky Mountains. (Other investigators postulate that the sands were transported from the late Paleozoic through to the early Mesozoic.)10Following deposition, the sand was purportedly wind-transported south-south-east into the south-western USA, where it combined with sands of the Aztec and Nugget Sandstones.11

While most scientists agree that the Appalachian Mountains are a viable source area for the Navajo Sandstone, they still dispute the exact volume of sands derived from this region. Several scientists propose that the majority of the sandstone is derived directly from the Appalachians,12,13 while others include sands from the ancestral Rocky Mountains and other non-specified siliciclastic sources.14

Navajo Sandstone within the Creation/Flood framework

While Flood currents of cross-continental scale were modelled as early as 1994,15 no particular source-deposit sedimentary relationship was identified. In 1998, I proposed that the Appalachian Mountains were uplifted and eroded during the Flood Event.16,17 This interpretation was based on the eroded nature of these mountains and the thick and widespread sedimentary layers deposited to the west and south of them. However, while aware of Appalachian-derived sediments extending across much of the Gulf of Mexico basin, I had not considered the possibility that these sediments might extend as far away as Arizona, Nevada, Utah or Colorado. 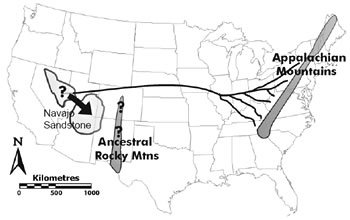 A non-creationist interpretation for the Navajo Sandstone. A young-earth creationist interpretation might suggest that: 1) the sands were eroded from the uplifted Appalachians during the Flood, 2) the clastic sediments were transported by continent-crossing currents and 3) the quartz sands were eventually deposited in the area where we presently find the Navajo Sandstone in the south-western USA.

The uniformitarian assumption of the radioisotope dating method have been discussed elsewhere, and creationists reject the great ages proposed.18,19 However, the isotopic ratios of Uranium/Thorium/Lead/Helium and diffusion rates within these zircon crystals might provide unique information with respect to provenance.20,21

I remain extremely sceptical that radiometric dating has any place within the young-earth Creation/Flood framework. However, I do not think it wise that we completely abandon our analysis of radiometric dating until we can clearly understand what (if any) relevance it may supply to our framework.

I now speculate on an unproven idea for the use of this methodology. It would be interesting to determine if the radiometric relationship between parent and daughter isotopes might demonstrate a genetic link between zircon grains and a geologic source. What if the ratios of the parent/daughters can be matched for geologic materials thousands of kilometers apart? This might suggest a common point of origin and perhaps provide information about the Flood and its effect on the earth. The ratios would serve as a means of understanding commonality instead of a basis for determining any uniformitarian-purported age.

Age-dating strata within the Creation/Flood framework must be constrained by the scriptural record. I believe that determining the age of the geologic material and manner in which the Navajo Sandstone was deposited is possible within the Creation/Flood framework based on the geologic energy necessary to account for the magnitude and extent of this sandstone deposit across the western USA. If the uplift of the Appalachians occurred during the Flood, it would seem reasonable that extensive erosion would remove overlying geologic material. This material would then be available for transport, sorting and eventual deposition. While I am uncomfortable with the concept that the Navajo Sandstone was derived from the Appalachian Mountains, based solely on the uniformitarian age dating of zircons, I do believe that this source location is possible.

However, additional support for this premise should be pursued, separate from the radioisotopic dating method. If we assume that the Navajo Sandstone was eroded from the Appalachian Mountains and deposited in the western USA, then I would suggest that this occurred during the Middle Flood Event Division of the Flood Event Timeframe.22,23 This period of time during the Flood would have provided sufficient energy to transport tremendous volumes of siliciclastic material 1,800 to 2,400 km across much of the submerged North American continent.

Because the Navajo Sandstone has no modern fluvial-desert analogue, a strong element of faith is required to believe that the tremendous volume of siliciclastics originated as the current non-creationist model presupposes. I suggest that the only way we can properly understand this geologic feature is to study it within the context of the global Flood of Genesis.

While the uniformitarian assumptions of radioisotope dating of zircons are inappropriate in the Creation/Flood framework, the isotopic information obtained in this testing might prove fruitful in the identification of common geologic materials and source areas. Many sedimentary deposits cover the globe and most do not have clearly defined points of origin. The Creation/Flood model would predict that the majority of the materials in the global sedimentary rock record have been transported to some degree. Identifying common source areas could be invaluable in better understanding the effects that the Flood had on erosion and transport of various geologic materials.

The global Flood of Genesis was an event that still defies a full understanding and complete explanation of its impact on planet Earth. We face a daunting task as we seek to understand Earth’s brief history based on the rock record.