Why settle for a mere one-carat diamond? If you really want to impress her, go for the big rocks. Down in the Cave of Crystals under Mexico’s Naica silver mine, you’ll find crystals measuring up to 36 feet (11 m) long and 3 feet (1 m) wide.

Prior to its discovery in 2000, this cave was flooded with hot, mineral-rich waters. These fluids had percolated up from molten rock deep in the earth. As the waters cooled in the cave, they became so saturated with dissolved gypsum that it could no longer stay dissolved. So the crystals began growing, probably taking only a few hundred years to reach their current size.

These are the earth’s largest known selenite crystals. Such beautiful, clear crystals formed naturally because our Creator designed even the individual atoms and their properties with an artist’s eye. The breathtaking result is a cathedral deep underground that cries out glory to the God of heaven. 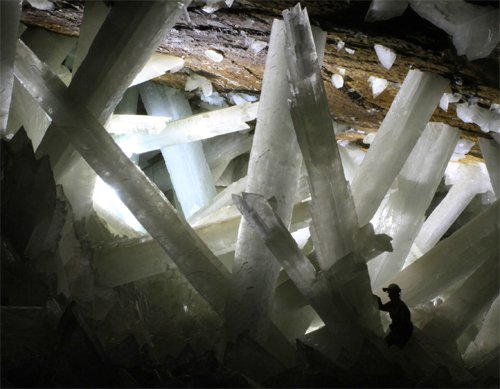 Inside the Naica silver mine, Mexico