Radioisotope Dating of Rocks in the Grand Canyon

The radioisotope methods, long touted as irrefutably dating the earth as countless millions of years old, have repeatedly failed to give reliable and meaningful absolute ages for Grand Canyon rocks.

Rafting through Grand Canyon, northern Arizona, is a most exhilarating and enjoyable experience. Deep below the rim, the crystalline basement rocks tower above the turbulent Colorado River. Official publications say these rocks are more than a billion years old, but when the methods used to date them are carefully examined, a totally different story is discovered. 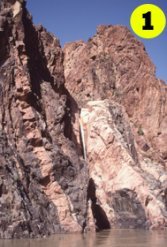 Clearly visible in the walls of the Inner Gorge are spectacular light-coloured rocks, such as the pink granites,1 which stand out starkly against the darker, metamorphic rocks2 (figures 1 and 2). The latter are former sedimentary and volcanic layers that have been transformed (metamorphosed) by heat and pressure during intense geologic upheavals in the past.

Among these volcanic layers are distinctive dark-coloured rocks called amphibolites3 (figure 3). These were once flows of basalt lava, up to tens of metres thick (figure 4). Some outcrops reveal round pillow structures, showing that the basalt lavas erupted under water.

How Old Are the Rocks?

Based on radiometric dating, long-age geologists say that the basalt lavas erupted 1,745 million years ago4 and were metamorphosed some 1,700 million years ago.5 Many people, including many scientists, accept these dates as absolute truth. They believe that when different radio-dating methods are used on the same rocks, they will all yield the same age. But the quest to test this belief by sampling rocks from deep within Grand Canyon has found it is not true. 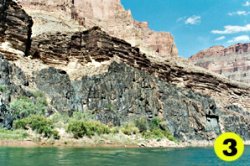 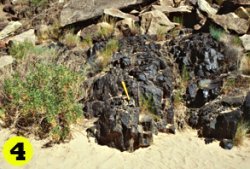 Figure 4: Closer view of an outcrop of amphibolite where a single 1.5 m (5 ft) wide, original basalt flow (now tilted vertically) can be identified. 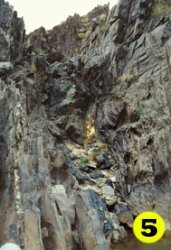 During several raft trips through Grand Canyon, many samples of these “Brahma” amphibolites were collected from various outcrops in the Inner Gorge.6 These included seven samples from a single amphibolite body (figure 5).7

All the samples were sent to two well-respected commercial laboratories for radioisotope testing.8 Both laboratories use standard, best-practice procedures on state-of-the-art equipment and routinely provide accurate and repeatable measurements of the required isotopes.

It is important to realize that the laboratories do not measure the “age” of the rocks but the isotopes in them at the present time. Geologists calculate an “age” using the measured amount of a “daughter” isotope (e.g. argon) and its corresponding “parent” isotope (e.g. potassium).

However, before this calculation can be made, it is necessary to assume how much of the “daughter” and “parent” were present when the rock formed. It is also necessary to assume that no isotopes were gained or lost over time and that the rate of radioactive decay has remained constant at the very slow rate measured today. 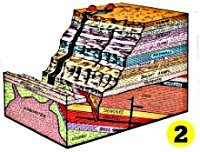 Figure 2: Schematic geologic diagram of the rock layers in Grand Canyon. The crystalline rocks of the Inner Gorge are below the horizontal strata of the main canyon walls (after Austin, ref. 13).

The problem is that we don’t know whether these assumptions are reasonable (because they are not provable), and it is especially awkward for metamorphic rocks. Geologists overcome this problem by “interpreting” the result. For example, the calculated “age” could be taken as the “date” of metamorphism, or it could be the “age” of the original volcanic (or sedimentary) rock, or something in between, or something else.

The calculated ages for all the individual samples from the same geologic formation using the same dating method turned out to be vastly different (see box, “Calculating the ages”, below), even for those closely spaced samples from the same outcrop of the same lava flow. The results are not even close to each other, although the samples should all have given the same age.

Furthermore, the ages calculated for these Grand Canyon rocks using three different “isochron” methods also disagreed greatly with each other. Even when the error margins are taken into account, the three different dating methods give completely different “ages” that cannot be explained away.

Indeed, none of the isochron “ages” corresponds to the “date” for any theorized geologic event—neither the original lava eruptions nor the subsequent metamorphism. Clearly, the calculated ages are useless for dating any event.

The isotopic results other than potassium-argon (K-Ar), namely rubidium-strontium (Rb-Sr), samarium-neodymium (Sm-Nd) and lead-lead (Pb-Pb), were used to calculate ages for the rock formation utilizing isochrons.2 Three ages altogether were obtained, one for each isotopic system.

The best isochron plots are where the straight line of best-fit falls within the analytical errors (the ± values) for each data point. Routinely, if the data set is large, a few outlying data points are ignored if they don’t plot on the line. Geologists justify this, saying that some geochemical alteration in the past disturbed the radioisotopes in those samples.

Note that the quoted “age” error margins (the ± values) are relatively small, due to the excellent statistical “fit” of these isochrons to the data. In spite of this, the three different radioisotope methods give three very different “ages”—that is the “isochron discordance” is pronounced. Figure 8 graphically illustrates how that, even when the calculated error margins are taken into account, the different radioisotope dating methods yield vastly different “ages” that cannot be reconciled.

The Rule, Not the Exception

Some might want to dismiss these conflicting “dating” results as an isolated abnormality. They might claim that they are due to the uncertain effects of metamorphism and later alteration, especially erosion and weathering. But these are not isolated results. They are further confirmation of the repeated failure of all the radioisotope “dating” methods to successfully date Grand Canyon rocks.Austin, S.A. and Snelling, A.A., Discordant potassium-argon model and isochron “ages” for Cardenas Basalt (Middle Proterozoic) and associated diabase of eastern Grand Canyon, Arizona; in: Walsh, R.E. (Ed.), Proceedings of the Fourth International Conference on Creationism, Creation Science Fellowship, Pittsburgh, Pennsylvania, pp. 35–51, 1998.,9

It is not just creationists who are discovering these dating failures. Other geologists are also reporting that different methods on the same rock unit give conflicting radioisotope “dates”.10 But in their reports those geologists include tenuous “interpretations” to try to explain away the abnormal amounts of daughter isotopes. It seems they are trying to avoid the inescapable conclusion that the radioisotope methods simply do not yield reliable ages.11

The radioisotope methods, long touted as irrefutably dating the earth as countless millions of years old, have repeatedly failed to give reliable and meaningful absolute ages for Grand Canyon rocks. Irreconcilable disagreement within, and between, the methods is the norm, even at outcrop scale. In fact, when carefully examined, this radioisotopic evidence is consistent with the view that these rocks are young (see box, “Accelerated radioactive decay in the past”, below).

These results are a devastating “blow” to the concept of long ages, foundational to uniformitarian geology and evolutionary biology. It is entirely feasible that the basalt lava flows, now deep in Grand Canyon, erupted onto the ocean floor during Creation Week and were metamorphosed in the upheaval that produced dry land on Day 3, just six thousand years ago.12

Figure 7: Isochron plots for the Brahma amphibolites. (A) Rb-Sr (B) Sm-Nd (C) Pb-Pb. The crosses and ellipses are the data points (sample analyses) and their sizes are proportional to the ± analytical errors. 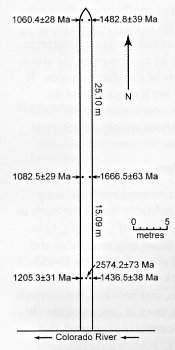 Figure 6: Sketched plan view of the extent of the thin amphibolite layer just upstream of Clear Creek showing the locations of the “dated” samples and their calculated K-Ar “ages”. 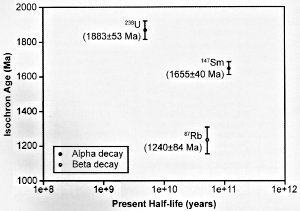 Accelerated radioactive decay in the past

Research by the RATE project1 has uncovered much evidence that radioisotope decay rates were accelerated in a global catastrophic event in the recent past.2 This evidence includes the patterns of discordances between “dates” from the different radioisotope systems.3,4,5,6

Obviously, if radioisotope decay was accelerated, say during the Genesis Flood, then the radioisotope decay “clocks” could never be relied upon when they “date” rocks as millions and billions of years old. Indeed, there are several independent lines of irrefutable evidence7,8,9which indicate that the rates of decay of these long-age radioisotopes were grossly accelerated during some event in the past, up to millions of times faster than their currently measured rates. Thus, it is entirely plausible that the rocks are only a few thousand years old.