When you look closely at Lake Superior’s landscape, you’ll see evidence of a catastrophic past.

My husband and I were married along a stretch of pebbled shoreline. While waves lapped at our feet and birds soared overhead, cliffs of hardened lava formed the dramatic backdrop to our ceremony.

As you read this, your mind may have transported you to the shores of Hawaii, but the volcanic rocks we stood on as we said our vows line the coast of Lake Superior, along Minnesota’s North Shore. Lava? In Minnesota? It’s true. Minnesota is a land forged by fire and ice, and evidence of ancient lava and crushing glaciers can be found all over this beautiful state that my family calls home.

To correctly trace the geologic history of Minnesota, you must put on the right pair of worldview glasses. Unfortunately, when people ease their cars onto overlooks for prime photo ops all along Lake Superior’s coastal highway, they encounter state park signs rife with evolutionary interpretations of the landscape surrounding them. These signs, as well as books and articles about the area, claim that Lake Superior is sitting atop 1.1-billion-year-old rocks, that lava erupted over the area for more than 100 million years, and that multiple ice age movements and shallow sea inundations occurred across our state.

A Rift in Time

Before the worldwide flood of Noah’s day, all the earth’s continents were connected in one giant supercontinent. Then earth’s internal stability dramatically changed, and the supercontinent began to break apart.

A large fissure, called the Midcontinent Rift (MCR), began tearing through the middle of the land that is now the United States. Today, the MCR’s horseshoe shape cuts through Kansas, Iowa, and Minnesota, wraps around Wisconsin, travels back down through Michigan, and extends further south.

Secular scientists can’t explain why the MCR exists or why the supercontinent began to break apart. However, when we look to the Bible, we find the clues that help us understand how these events came to be. In Genesis 7:11, we read about the initiation of the global flood that would cover our planet and turn it into a watery graveyard. The Bible says that in the six hundredth year of Noah’s life, all the fountains of the great deep were broken up, and the windows of heaven were opened. At that time, huge cracks, or rifts, began to form in our earth’s crust, including the formation of the MCR.

Rapid melting of the rock deep within the earth bubbled up and erupted from the MCR, covering the surrounding area in lakes of fiery lava, which would later harden into thick rock deposits known as flood basalts. Evidence of this ancient volcanic activity can be found in all the state parks along Lake Superior’s Minnesota shore, and seismic surveys indicate that the flood basalts sitting beneath Lake Superior are up to 15 miles thick.1

Because the Lake Superior flood basalts formed in a non-underwater environment,2 and because the basalts in the Lake Superior region are laid directly on top of crystalline basement rock, (likely rocks originally created on day three of creation week), the MCR may be one of the initiation points of the Genesis flood.3 Then, as the flood progressed, waters rushed in and began eroding the newly formed basalts and submerging the rift in layers of sediments.4

After pumping out a volume of lava estimated to be over 528 quadrillion gallons,5 the MCR stopped erupting (as a comparison, Lake Superior holds three quadrillion gallons of water). The MCR came close to breaking up our continent,6 but because the land didn’t pull apart all the way to form a new ocean basin, the MCR is considered a failed rift. But if the MCR hadn’t failed, the United States would have been ripped down the middle, with Minnesota forming a coastal state on one land mass, and Wisconsin a coastal state on the other. Iowa would have been torn in two, with an ocean between the two halves. 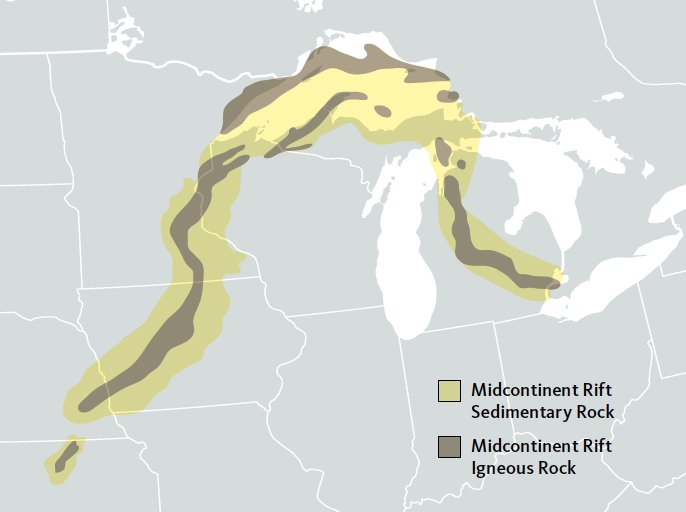 This map shows the size and spread of the Midcontinent Rift, as well as some of the areas featuring igneous rocks, volcanic sediments, and other rift-related rocks.

After the flood ended, the waters receded from the land and filled the ocean basins and trenches that we see today. Noah and successive generations carried on in a much different world than the one they had previously known. As the planet “settled” from the calamitous effects of the flood, the earth endured earthquakes, volcanic eruptions, and massive storm systems. Volcanic ash blocked sunlight from warming up evaporated water, and the resulting precipitation would have come down over the colder landmasses as snow, ushering in the world’s ice age. During this time, snow would have accumulated over large portions of the northern and southern latitudes of the globe. Heavy glaciers formed that would cover Minnesota with as much as 1,000 feet of ice. (Our classically cold winters aren’t looking too bad right about now.)

There is enough water in Lake Superior to cover all of North and South America in one foot of water.

Once the catastrophic aftereffects of the flood lessened in frequency and intensity, the storms eased, the ash cleared, and the ice began to thaw. Glaciers melted and retreated, scraping through the landscape. They left pockmarked gaps in their wake, forming the many freshwater lakes Minnesota is known for. This retreating glacial ice also gouged through the MCR’s sediments and flood basalts, scraping out and filling a giant lake basin that would be known as Glacial Lake Duluth, which would eventually drain down to become Lake Superior.

Visitors come to Minnesota today to delight in our state’s unique geological scenery. But if people are wearing the wrong worldview glasses, they will miss what the evidence points to—the truth of a young earth, the worldwide flood of Noah’s day, and the subsequent rapid ice age.

Some of our planet’s most dramatic landscapes are a result of the flood—God’s judgment on a world that was broken with sin. But God is the master of turning broken things into beauty, and now these landscapes are some of the most stunning places on earth.

On our last trip to Lake Superior, my family stood along the lake’s edge after a summer downpour. As we looked out at the water, a double rainbow stretched across the entire scene. How fitting that one of the places where God initiated his judgment is a place that still reminds us of his promise to never send an all-encompassing flood to the earth again.

The next time God judges the world, it will not be through water but fire (Luke 17:26–30). As Noah was saved from the floodwaters by an ark, so can we be saved through the redemptive work of Christ’s death on the cross for our sins. When we receive Jesus’ free gift of salvation, he promises that we will one day enter into a place of eternal beauty and perfection.

Whenever I stand along the shores of Lake Superior, gazing at its impressive size, I thank God that I live in a place that testifies to the truth of his Word.

Laura Smetak earned a degree in biblical studies from the University of Northwestern and holds her MAT from Hamline University. She resides with her family in Minneapolis, where she teaches science from a biblical worldview perspective at a private school.
Next Article US Report Declares No Evidence of Alien Life 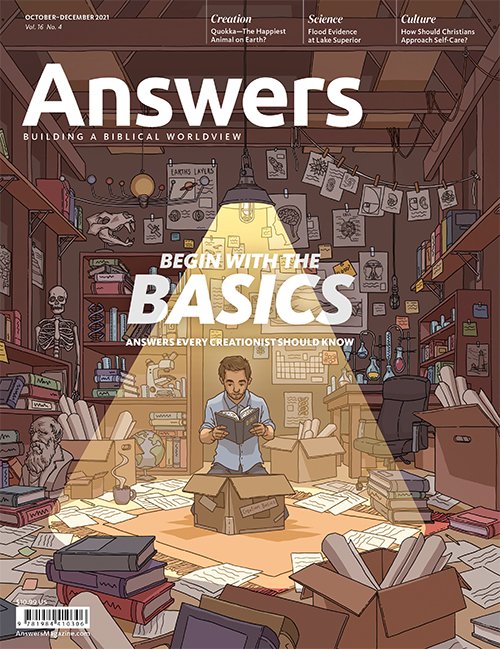