That hellish symphony finished over 3 years ago, but its results have now provided further pointers to the possible rapid and catastrophic origin of coal.

The time was 8.31 Sunday morning May 18th, 1980. One minute later, a gaping hole appeared in the face of the earth as an estimated 10 megaton explosion blasted over a cubic mile of material out of Mt. St. Helens, U.S.A. The top 400m (1,300 feet) of the mountain was blown away and the blast disintegrated trees and flattened forests for a radius of 11 km (7 miles). A wall of ash, mud, and broken trees roared across nearby Spirit Lake (right) and swept down Toutle River Canyon.

After the violence had subsided, a gigantic raft of broken logs and stumps was left floating on Spirit Lake. Between the trees were the smaller charred remains of leaves, bark, broken branches, woody splinters and anything else that had not totally burned in the horrific gas cloud that poured down the mountain. The slopes around Mt. St. Helens were a sterile grey, bare of life and covered with loose ash and pumice. 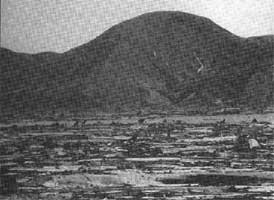 That hellish symphony finished over 3 years ago, but its results have now provided further pointers to the possible rapid and catastrophic origin of coal.

Aerial photographs show that the log raft in Spirit Lake is smaller now. Many trees have slowly become waterlogged and sunk. Smaller debris settled to the bottom long ago. But it is the trees which suggest fascinating evidence about coal—they sank root first!

Many of the logs, as shown in the photo1, are floating vertically roots down. Others investigated by skin divers MacMillan and White are resting on the bottom, roots down also. The underwater view gave a first impression of a drowned forest, but a gentle push from the skin divers proved otherwise. The trees were easy to push over, but rapidly returned to the vertical position. Where the depth was less than 6m, the bottom areas were devoid of debris. The logs and fragments which have sunk have either accumulated in the deeper basins of the lake or been rapidly covered by ash washed into the lake as it quickly eroded from the bare slopes. 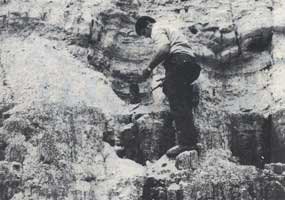 2 A quick look at some coal deposits will show the relevance of the information from Mt. St. Helens and Spirit Lake. Shown in the photo are the upper and lower pilot seams south of Swansea Heads, Australia (left). Notice that the lower coal seam has vertical trees jutting out of it. They protrude into ashy sediments and when originally discovered went through the ashy sediments and the upper coal seam3. Erosion and fossil collectors have reduced them to small stumps.

Many geologists have insisted these trees grew where they are found and they are offered as proof that the coal below them formed from material which slowly developed in a swamp on the spot. This is in spite of the fact that the trees have no roots and protruded through the top coal layer as well. Mt. St. Helens now provides confirming evidence, showing how these rootless trees in vertical growth position could have been put in place ‹catastrophically. How? Imagine what the bottom of Spirit Lake could look like at present, particularly in the deeper basins. Firstly there would be layers of ash and dirt and rubble from the initial explosion, followed by the accumulated wood fragments, leaf debris and bark which sank after floating for only a short while in the lake. Much of this material will be charred or burnt. Then will come more recent bark which has only lately been peeled off the floating trees through bacterial action. Logs and stumps, many in a root down position, will rest on the top layers and ash would be accumulating around them, as indicated in the following idealized sketch. (fig. 1.)

It is not hard to imagine how increased run-off, or further ash falls could reproduce this pattern several times in quick succession e.g.: (fig. 2.) 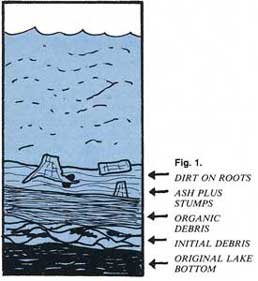 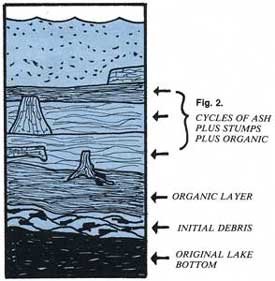 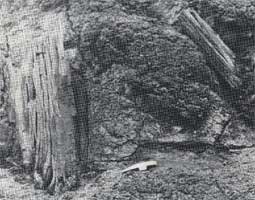 The potential similarity to the Swansea coal beds should be obvious. Australia’s Yallourn brown coal beds also show similarities to the Mt. St. Helens area, including layers of burnt material, broken logs and stumps in rooted positions and the total absence of true soil (right).

Laboratory experiments indicate that rapidly applied intense heat4 or vibrating pressures5 are mechanisms whereby woody or vegetable material can be converted to coal in a short time. This makes areas like Mt. St. Helens especially relevant to coal formation. They could supply both heat and shock.

One further point needs to be made. The size of any deposits which may be produced in Spirit Lake will be insignificant compared to known coal beds and "buried forests".

Many Australian coal beds occupy thousands of square kilometres. It should be obvious that any catastrophe which could produce these beds, would have been on a much greater scale than the impressive but relatively minor eruption and flood which was Mt. St. Helens. But what large volcanic and watery catastrophe has the world experienced? 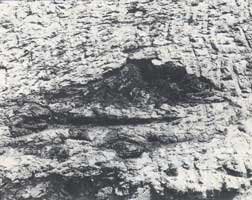 Most people are still unaware that much of the water for Noah’s flood came from inside the earth. Genesis records that the fountains of the deep broke open.7

The earth opened! This probably involved much volcanic activity as well. Even today up to 90% of what comes out of volcanoes is water. At the end of the flood, mountain building occurred. The earth was lifted up and valleys sank down.8 The Upheaval would have been catastrophic. The erosion and debris produced would have been phenomenal. But of even more significance is the fact that Noah’s flood was a unique catastrophy which would have devastated the forests of the entire world.6 This would have produced huge log rafts which were later buried in the associated volcanic activity,7 mountain building8 and erosion that occurred during and at the end of the flood. All of which makes the flood of Noah a primary contender when it comes to the origin of many coal deposits.