The Story That Won’t Be Told

Secular geologists believe that it a marked trail commemorating the Missoula flood’s path and explaining its significance needs to be set up from western Montana into northwest Oregon.

The Lake Missoula flood occurred at the peak of the Ice Age when a volume of water about 2,220 cubic kilometers (540 cubic miles), three times the volume of Lake Erie or one-half the volume of Lake Michigan, burst through its ice dam in northern Idaho and swept through eastern Washington into northern Oregon and out into the Pacific Ocean.1

The water at the ice dam in northern Idaho was 600 m (2000 ft) high and upstream covered what is now the city of Missoula, Montana, to a depth of 300 m (1000 ft). Shorelines from this ice age lake are commonly seen in the valleys of western Montana. It is believed this giant lake emptied in two days, rushing 120 m (400 ft) deep over the present locations of Spokane, Washington, and Portland, Oregon. It sped at up to 100 kph (60 mph) through tight spots in eastern Washington and 80 mph through the Columbia Gorge between Washington and Oregon. It rapidly carved out the distinctive landscape known as the Channel Scablands, including the majestic canyon known as Grand Coulee.

Figure 1. Shorelines of glacial Lake Missoula along the eastern hills of the Little Bitterroot Valley, 75 miles northwest of Missoula, Montana.

Geologists believe that it is about time that a marked trail commemorating the flood’s path and explaining its significance needs to be set up from western Montana into northwest Oregon.2 Just like with the path of the expedition of famous US explorers Lewis and Clark, and that of pioneers who followed the Oregon Trail, scientists plan to set up signs and interpretive centers highlighting important features along the 600-mile flood path. With the proposed help of the National Park Service, these memorials will be placed mostly along major highways, which would draw large crowds.

The interpretive signs likely will tell the usual story of how J Harlan Bretz first noticed the strange landforms of eastern Washington and how he postulated a flood of enormous magnitude. While pointing out the abundance of features supporting the Lake Missoula flood, the story will continue with the fact that geologists of the day did not believe Bretz, who was finally vindicated with field research. The signs are sure to mention that geologists now believe there were well over 50 floods over a period greater than 2,500 years at the peak of the last ice age, some 14,000 years ago.

This will only be part of the story. They will not tell the public all the assumptions and problems associated with their dates. They likely will not let the public in on the dispute over the number of floods, and that some uniformitarian geologists advocate only one large Lake Missoula flood.3 From field research over 10 years, I have found the evidence substantial for just one gigantic Lake Missoula flood, possibly followed by a few minor floods.4,5,6 The geologists will surely whitewash the scientific persecution that Bretz endured for 40 years because the flood seemed too biblical in proportion. Critics of Bretz went on to dream up many alternative, but outrageous, theories to explain Bretz’s flood features. Most of his detractors never bothered to check the data in the field of the Pacific Northwest, and worse, those who did manage to examine the landforms in eastern Washington explained away the very features obviously supporting a gigantic ice age flood. It showcases the extreme bias towards the Genesis Flood which blinds their eyes, even to this day, despite growing objective evidence that the Flood really occurred.7 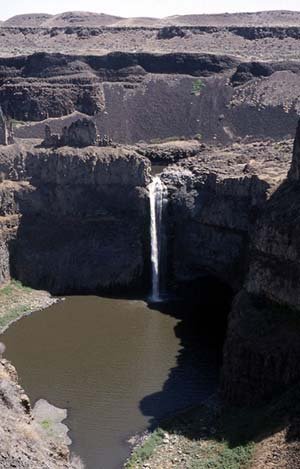 Figure 2. Palouse Falls within Palouse Canyon, southeast Washington. Palouse Canyon was cut through about 500 feet of basalt lava in several days when the Lake Missoula flood overtopped a ridge.

I also do not expect the flood pathway stories to tell that the flood eroded, in several days, 50 cubic miles of basalt and silt that resulted in deep vertical-walled coulees with flat bottoms. Grand Coulee, up to 50 miles long and 900 feet deep, likely was excavated very quickly by receding waterfalls. Geologists would expect such canyons to have been carved in millions of years by present-day streams.

It is surely doubtful the signs will reveal that the flood rhythmites, repeating layers of sand and silt over 100 feet thick, formed in side canyons in several days. Sediments like these rhythmites would normally be assumed to have been laid down in hundreds of thousand, if not millions of years.

The flood overtopped a ridge north of the Snake River, rapidly cutting a narrow canyon 500 feet deep. The modern Palouse River that used to flow west into the Columbia River before the flood now takes a 90 degree left-hand turn south and flows through the canyon carved by the flood. This is called a water gap in which a river or stream flows through a barrier instead of flowing around it. If a geologist did not know about the Lake Missoula Flood, he would have suggested one of three main speculations on the formation of water gaps. But it was formed in the Lake Missoula flood. The Lake Missoula flood provides an analog for the thousand or more rivers over the earth that now flow through mountain barriers, sometimes through gaps much deeper than Grand Canyon. The river should have gone around the barrier, if the slow processes over millions of years model were true, but these water gaps through transverse barriers can be cut rapidly during the Genesis Flood.8

The article in the Yakima Herald-Republic9 even had the gall to say, “By any account, the Old Testament flood was a leaky faucet by comparison [with the largest Lake Missoula flood].” It is only by willful blindness to geology and Scripture that they can make a statement like this (2 Peter 3:3–6).