Mt Tarawera is yet another testimony to the rapidity with which fossilization can occur, and that the evolutionary concept of fossils as being ‘prehistoric’ does not conform with the evidence.

At 1:40 am, on the morning of 10 June 1886, a mountain a mere 29 kilometres (18 miles) from Rotorua in the North Island of New Zealand, blew its top. For around four hours, Mt Tarawera, as it is now known, spewed red hot rocks, mud, ash, and smoke over the countryside from fissures up to three kilometres wide and around 19 kilometres (12 miles) long.1 The immediate area around the mountain was devastated with an estimated 15,000 square kilometres (5,800 square miles) of countryside affected in some way. 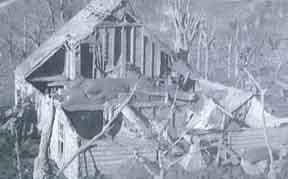 The mission house on the hill above Te Wairoa, following the eruption.

By 5:30 am the eruption was over, although ash continued to fall, and steam vented from the mountain for days. The death toll was 153, a relatively small number due to the low population of the area, but two whole Maori villages were wiped out.

Close by the mountain at its western end were two of the wonders of the world. The famous pink and white terraces descended the slopes alongside Lake Rotomahana in a series of brilliant white and pink steps.2 The white terraces were the larger, covering some three hectares (eight acres) and beginning in an enormous boiling cauldron 243 metres (about 800 feet) above lake level. The steps formed as a result of sinter3 dissolved in the water being deposited as the water made its way to the lake. When the sun shone on the vast area of silica-coated steps it sparkled like crystal. The colouration of the pink terraces went from pure white at the bottom through various shades of pink, which deepened towards the top. Then the colour mingled with a yellowish tinge until right at the top it became a delicate primrose. From all reports the terraces were a stunning sight. One observer said, ‘This is a revelation of beauty that strikes one dumb. I have seen all the world has to offer in glory and grandeur and this is supreme among them all’.4

The text of The Great Eruption of Tarawera, a tourist booklet, describes them this way: ‘In sunlight they glittered like a footstool of heaven itself as St John the Divine might have described it; flashing with varied hues of opal, its pools azure blue, and every terraced step hung with chalcedonic stalactites’.5

An old photograph shows the white terraces as they appeared before their destruction in Tarawera’s volcanic firestorm.

A petrified bowler hat from The Buried Village.

The large pools formed behind the steps varied in temperature from boiling in the highest to cold in those near the lake. The lower ones were ideal for visitors to bathe in.

The eruption on that 10 June blew the pink and white terraces out of existence. New Zealand and the world lost two of their natural wonders.

Te Wairoa was a small settlement close to the mountain on its north-west side. It had a church, a school, and two hotels, all of which were destroyed. The Te Wairoa of 1886 is today ‘The Buried Village’. The remains of some of the buildings have been excavated, and artefacts entombed in the ash for 60 or so years are displayed in a small museum.

Some of these artefacts are fascinating, as the photos show. For example, there is a bowler hat which is now as hard as stone. Further, you could, if you had the stomach, tuck into a petrified sandwich or two. Along with a fossilized bag of flour for the bread, there’s a petrified ham for the filling. There are other items that look like sausages. Who could resist petrified sausages? However, for all their appearances, it seems they are not sausages at all, but perhaps some sort of medicine or fuel.6 All these artefacts were petrified as a result of being buried in the ash from the eruption.

Recently, as a result of inquiring after the whereabouts of this fossilized ham, I received a letter from the Physics Department of the University of Auckland. The writer said, among other things, ‘You may of course be using the term “fossil” in a loose sense but a ham could really in no way be a fossil—nor indeed could it be ‘petrified’ in so short a space of time. (True petrification takes time in the order of millions of years.) I do not know the state of the ham when discovered but there are a number of processes that I could imagine would harden it significantly and it was no doubt one of these that produced the item …’.7

I asked why the ham could not be a fossil, and was given the following definition from the Dictionary of Geological Terms, 1974, published for the American Geological Institute:

‘FOSSIL: 1. The remains or traces of animals or plants which have been preserved by natural causes in the Earth’s crust exclusive of organisms which have been buried since the beginning of historic time. 2. Anything dug from the Earth. (Obsolete)’.8

As the ham was petrified within ‘historic time’, it was excluded on the basis of the first of these definitions from being called a fossil. Furthering the amiable exchange, I objected to the definition, even though it came from a reputable dictionary.

A petrified bag of flour from The Buried Village. 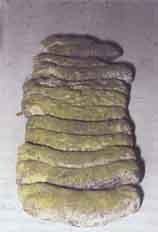 Sausage-like objects that are believed to be medicine or lampfuel.

First, fossilization occurs through a number of processes. How fast or when those processes occurred is irrelevant. The important thing is that a process has occurred. Second, the definition stacks the deck in favour of a particular view of history—the evolutionary view, by including in the definition an evolutionary concept. Since creationists say there is no such thing as ‘prehistory’, only history (man has been here from the beginning), this definition works against their understanding of fossils. If a fossil was determined purely on the basis of a process having occurred, which is the creation position, then much of the evolutionary mystique attached to fossils would evaporate.

One consequence of focusing on the process is that we know it is incorrect to say petrification takes millions of years. This ham, flour, and hat have not even taken 110 years to fossilize. They would have been transformed into their petrified state in perhaps days or weeks, or at the outside, a few years. The absolute maximum is 60 years—the length of time they were buried.

Actually, some of the Maori folk who lived in the area made pocket money as a result of the tourist trade developing around the pink and white terraces. They placed various items, such as hats, into the water at the terraces so as to petrify them.* Once petrified, they were sold as souvenirs.

And then there was the tourist graffiti. Hundreds of names, dates, addresses and poems, even the name of Sir George Gray, an early Governor of New Zealand, were scribbled on the silica to be covered in short measure by a transparent film and so be indelibly there for all to see!9 Fossilized graffiti!

How about lunch papers and tins and bottles the tourists left behind? A sheet of newspaper left on the white terraces was within days encased in silica. Fossilized news or garbage depending on how you view last week’s paper!

Of course things fell into the waters of their own accord. One scientific visitor to the terraces in 1868 found ‘many insects, such as beetles and dragon-flies, as well as some feathers of a lark, and the whole body of a hawk’ encrusted in the sinter.10

Mt Tarawera is yet another testimony to the rapidity with which fossilization can occur, and that the evolutionary concept of fossils as being ‘prehistoric’ does not conform with the evidence.

* There are two types of petrification of organic substances such as wood. In one, the wood decays in a hot, mineral-rich environment. As the wood decomposes and is carried away, it is replaced molecule for molecule by the mineral. This may take many years, even perhaps hundreds of years, to be complete. In the other type, the mineral-rich solution infiltrates the specimen, which becomes impregnated with and/or encased by solid rock as the minerals precipitate, but the organic material remains, protected from further decay. This is the type of petrification which would be in view here.