Rhett and Link, the best-friend duo behind the wildly popular YouTube series Good Mythical Morning, announced in 2020 that they’d left the Christian faith of their childhood. In a nearly two-hour-long podcast episode, Rhett detailed his “spiritual deconstruction,” explaining how his faith was slowly splintered by doubts. He said, it “all came down to uncovering the truth,” including uncovering evidence for evolution.

Rhett mentioned grappling with the chromosome 2 fusion argument. The supposedly fused human chromosome 2 is frequently trotted out as proof of a shared evolutionary ancestor with great apes such as chimpanzees and gorillas.

Far from merely an overly technical argument contemplated by only geneticists or science nerds, this much-touted genetic smoking gun has convinced skeptics, like Rhett and Link, that evolution is true and therefore Scripture is wrong. But when you look closely, this whole chromosome 2 argument falls apart, revealing a flawed worldview bias—not a water-tight scientific proof.

The Argument Begins to Unravel

At first glance, this argument seems convincing. From an evolutionary perspective, since we presumably share a common ancestor with the great apes, it’s very likely that we would have the same number of chromosomes. But we don’t. Great apes have 48 (24 pairs) chromosomes, and humans have only 46 (23 pairs). To explain this dissimilarity, evolutionists predicted an ancient end-to-end fusion “event” in evolutionary history when two chromosomes became one. So as the human ancestor and ape ancestor diverged from the common ancestor, a fusion occurred in the branch that eventually became Homo sapiens sapiens—us—but not in the branch that became the great apes.

While the banding patterns are indeed visually similar, if chromosomes 2a and 2b did fuse to form a new chromosome, human chromosome 2 should be haunted by the ghostly remains of chromosomal structures known as telomeres and centromeres.

At the end of each chromosome are repetitive DNA sequences known as telomeres. Dr. Georgia Purdom, a geneticist at Answers in Genesis, has described these sequences as aglets, the little plastic bits on the ends of shoelaces.1 Just like the aglets help keep the shoelaces intact, these telomeres keep the DNA between them “safe” (since DNA shortens every time it makes a copy of itself). If two chromosomes fused end-to-end, our chromosome 2 should contain many telomere sequences in the middle of the chromosome. And evolutionists believe they’ve found them.

But there’s a problem. As one group of evolutionary researchers wrote, “Why are the [telomere sequences] at the fusion site so degenerate?”2 In other words, where did all the DNA letters (bases) go? Thousands of repetitive telomere sequences should exist, but just a scant few hundred are found at this supposed fusion site. And those few hundred are not “degenerate,” nonfunctional vestiges; they play a necessary role and are found in other chromosomes, not just chromosome 2.3

The problem gets worse for evolutionists. Not only is the alleged fusion site missing the expected telomeres, but there’s a gene at the fusion site. Genes do not exist in telomeres, and this gene is expressed in at least 255 different cell and tissue types. To make matters worse, the supposed ghost telomere is actually a switch for controlling gene activity. According to Dr. Jeffery Tomkins, the creation scientist behind much of this groundbreaking research, these DNA sequences “are not accidents of evolution but purposefully and intelligently designed functional code.”4

But What About the Centromere?

The telomeres didn’t pan out for the evolutionists. But each chromosome also has a centromere, which is specific, repetitive DNA sequences typically found near the center of the chromosome. During cell division, chromosomes are pulled in half by rope-like microtubules. These “ropes” anchor to proteins that are positioned around a centromere. If two chromosomes fused to become one, we should find two centromeres (one functional and one useless) in our chromosome 2. And evolutionists believe they’ve found the useless one.

One centromere is fully functioning. The other ghostly centromere is 90% smaller than a functioning centromere, contains sequences that are not unique to centromeres, and has a gene inside it. Just like the telomeres, genes do not exist in centromeres. As Tomkins puts it, “The fact that the so-called fossil or cryptic centromere is a functional region inside an important protein-coding gene completely refutes the idea that it’s a defunct centromere.”5

At first glance, the chromosome 2 fusion argument seems like a slam dunk for evolution. But with more research, the evolutionary story is unraveling. According to Tomkins, far from being the smoking gun of a human and ape shared ancestry, the actual evidence “is an undeniable double whammy against the whole mythical fusion idea, utterly destroying its validity. The overwhelming scientific conclusion is that the fusion never happened.”6

This isn’t the first time, and it won’t be the last, that evolutionary scientists’ interpretations have contradicted God’s Word, seemingly in a very convincing way. But eventually, science always confirms God’s Word because God’s Word is true.

Scripture clearly teaches that humans are a unique creation of God. Man was created from dust and woman from his side. We didn’t descend from an ape-like ancestor, and we do not share a family tree with the apes. Like all our DNA, our chromosome 2 bears and confirms the hallmarks of design, not a happy evolutionary accident.

Like all so-called evidences for evolution, the alleged chromosome fusion event is an interpretation imposed on the evidence.

Rhett alleges that he abandoned the faith he once professed because creationist data didn’t “seem like an adequate explanation for why [evolution] definitely feels like and looks like and seems to be very conclusive.” But it’s not really about the evidence at all. Like all so-called evidences for evolution, the alleged chromosome fusion event is an interpretation imposed on the evidence. It’s not a battle over the evidence. It’s really a battle over two different worldviews, one starting with God’s Word, one starting with man’s word. Ultimately, ideas based on the sandy foundation of man’s word will erode with time. But “the Word of our God will stand forever” (Isaiah 40:8).

Avery Foley is a writer and speaker with Answers in Genesis. She is a cohost on Answers News, a weekly live commentary on culture and science news. She holds a bachelor’s degree in religion from Liberty University and a master’s degree in theological studies from Liberty Baptist Theological Seminary.
Next Article Can Your Muscles Make It? 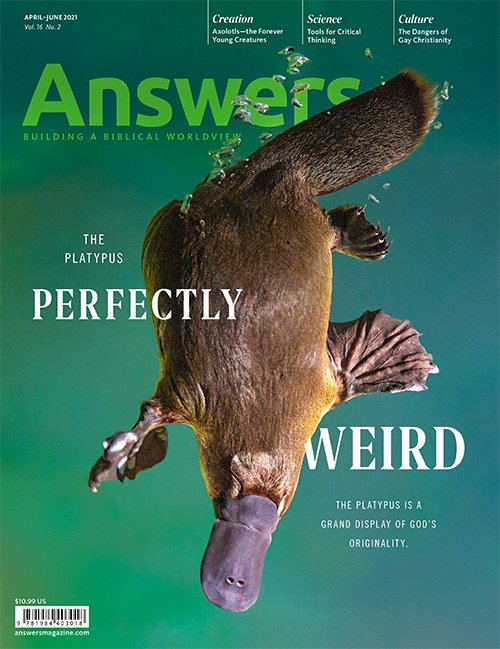