Give Now
In the Beginning Was Information

Preliminary Remarks about the Concept of Information

by Dr. Werner Gitt on February 26, 2009
Featured in In the Beginning Was Information
Share:
Email Using:
Gmail Yahoo! Outlook Other

What is the reason that such a system can function?

By way of introduction, we shall consider a few systems and repeatedly ask the question: What is the reason that such a system can function?

1. The web of a spider: In Figure 1 we see a section of a web of a spider, a Cyrtophora in this case. The mesh size is approximately 0.8 x 1.2 mm. The circle in the left picture indicates the part which has been highly magnified by an electron microscope to provide the right picture. The design and structure of this web is brilliant, and the spider uses the available material extremely economically. The required rigidity and strength are obtained with a minimal amount of material. The spiral threads do not merely cross the radial ones, and the two sets are not attached at the points of intersection only. Rather, they run parallel over a small distance, where they are tied or “soldered” together with very fine threads.

Every spider is a versatile genius: It plans its web like an architect, and then carries out this plan like the proficient weaver it is. It is also a chemist who can synthesize silk employing a computer controlled manufacturing process, and then use the silk for spinning. The spider is so proficient that it seems to have completed courses in structural engineering, chemistry, architecture, and information science, but we know that this was not the case. So who instructed it? Where did it obtain the specialized knowledge? Who was its adviser? Most spiders are also active in recycling. They eat their web in the morning, then the material is chemically processed and re-used for a new web. 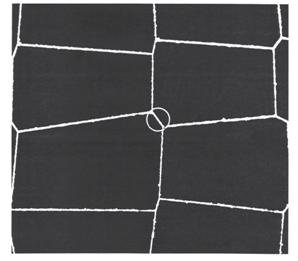 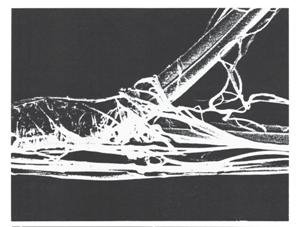 Figure 1:The web of a Cyrtophora spider.

The answer to the question of why everything works in this way is unequivocally that information plays an essential role. 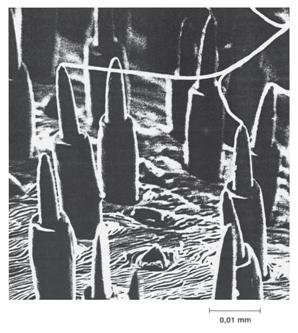 Figure 2: The spinnerets of Uroctea.

2. The spinnerets of Uroctea: The spinning nipples of Uroctea spiders are shown in Figure 2 under high magnification. The female has 1,500 spinnerets, only a few of which appear in Figure 2, where threads can be seen emerging from two of them. Silk having the required tensile strength is produced in the “factories” located directly below the spinnerets. All these complex processes are computer controlled, and all the required equipment is highly miniaturized. How is it possible that such a complex and minutely detailed manufacturing process can be carried out without mishap? Because the system contains a controlling program which has all the required processing information (see chapter 7).

3. The Morpho rhetenor butterfly: The South American butterfly, Morpho rhetenor, is depicted in Figure 3 under various magnifications so that the detailed structure of its wing scales can be seen (Scientific American, vol. 245, Nov. 1981, p. 106). The wings exhibit marvelous colorful patterns; metallic blue above and brown underneath. The wings were analyzed for pigmentation, but none was found. How can this colorful beauty then be explained? 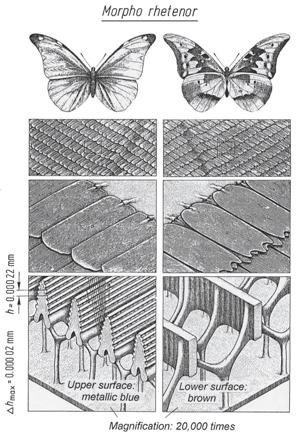 The detailed structure of the wings becomes apparent in three magnification steps, namely 50 x, 350 x, and 20,000 x. At the lower magnifications, the structure resembles roof tiles, but when the magnification is 20,000, the secret is revealed. The structure is quite extraordinary: a regular grid of precisely constructed wedge-shaped ridges spaced at intervals of about 0.00022 mm. This pattern is repeated so accurately that the maximum deviation is only 0.00002 mm. No earthly workshop specializing in miniaturization would be able to make one single wing scale with this required precision. What is the purpose of this marvelous structure?

A certain physical effect is utilized here in a marvelous way. It can be explained in terms of a simple example: When one drops two stones in a pool, concentric waves spread out from each point of impact. At some points these waves cancel out, and at other points they enhance one another. This effect is known as interference, and it is exactly this effect which causes the observed colors. When light rays from the sun impinge on the stepped grid, some colors are canceled out and other colors are enhanced. The grid spacing and the wavelengths of the incident light are precisely tuned in to one another.

How did this marvelous structure arise where everything is geared to a special physical effect? Once again the answer is information!

4. The development of human embryos: The wonders which occur during the nine-month gestation period are unsurpassable. During the first four weeks of the new life, billions of cells are formed, and they arrange themselves according to a fascinating plan to shape the new human being. Around the 15th day, a dramatic new development occurs: the first blood vessels appear. A few days later another wonderful event takes place: Within the tiny breast of the 1.7 mm long embryo two blood vessels join to form the heart, which begins to pump blood through the miniscule body before the end of the third week. The tiny new heart provides the developing brain with blood and oxygen. In the fourth month, the heart of the fetus1 already pumps almost 8 gallons (30 liters) of blood per day, and at birth this volume will be 92 gallons (350 liters).

In the embryonic stage, lungs, eyes, and ears develop, although they are not used yet. After two months, the embryo is only three to four centimeters long. It is so small that it could literally fit inside a walnut shell, but even at this stage all organs are already present. During the following months the organs increase in size and assume their eventual shape. Various stages of human embryonic and fetal development are shown in Figure 4 [B3]: 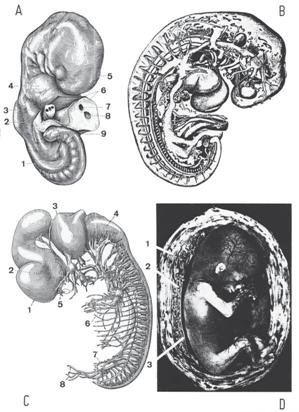 Part D: Fetus of 75 mm, shown inside the uterus: 1-Placenta, 2-Myometrium (= muscular wall of the womb), 3-amniotic membrane. The amniotic fluid has been removed.

How is it possible that embryonic development does not entail a disorderly growth of cells, but is systematic and purposeful according to a set timetable? A precise plan, in which all stages are programmed in the finest detail, underlies all these processes. In this case also, information is the overall guiding factor. 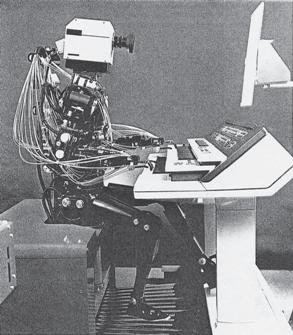 Figure 5: This organ-playing robot was exhibited at EXPO ’85 in Japan. It was developed by Professor Ichiro Kato of Wasedo University, and was built by Sumitomo Electronic Industries. The robot is now on show in the official Japanese government building EXPO ’85 (tsukuba). This illustrates the capabilities of robot technology, but this system cannot do anything which has not been pre-programmed.

5. The organ-playing robot: Would it be possible for a robot to play an organ? In Figure 5, we see exactly this. This Japanese robot, called Vasubot, even enthralls music lovers. It has two hands and two feet which are able to manipulate the manuals and the pedals, and it reads sheet music by means of a video camera. The notes are then converted to the required hand and foot motions. This robot can read and play any piece of music immediately without first having to practice it. The reason for this ability is the information given in a program, together with all the required mechanisms. If the program is removed, the robot cannot do anything. Again, we observe that information is the essential ingredient.

After having considered a few very diverse systems, we may conclude that the built-in information is the common factor. None of these systems could operate if the stored information was deleted. For a better understanding of processes occurring in living as well as in inanimate systems, we have to study the concept of information in detail. A professor of informatics at Dortmund briefly formulated a basic theorem, with which we could agree:

“Anybody who can identify the source of information, has the key for understanding this world”2 (or: “He who can give an account of the origin of information holds in his hands the key to interpret this world”).

The book The Character of Physical Law, by the American physicist Richard P. Feynman, may be regarded as a classic in the field of physics. The following is quoted from its preface [p. 172]: “The age in which we live is the age in which we are discovering the fundamental laws of nature, and that day will never come again.” In the field of physics, most laws have probably been discovered and formulated since then. However, in regard to the fundamental quantity information, we are still squarely in the process of discovery. Based on previous work we will formulate in this book several theorems on information which are similar to laws of nature. For the purpose of appreciating the scope and meaning of the developed theorems, some fundamental properties of the natural laws are discussed in the next chapter.

Previous Chapter Preface Next Chapter Principles of Laws of Nature