When Did the Fossils ‘Die’?

We can’t prove, from a strictly scientific perspective, the Flood of Noah. But the nature of the fossil records is just what we would expect to see from the record of the Bible.

Beginning in the early 1800s, Christian leaders began to be perplexed by the fossils. The problem stemmed from the facts that: (1) fossils appear to be the remains of once-living plants and animals; (2) some scientists, such as James Hutton and Charles Lyell, claimed to have ‘proved’ that the fossils were laid down by slow and gradual processes over long periods of time; (3) a straightforward reading of the Bible indicates that the creation was only thousands of years ago, and that death was not a part of God’s original plan, but was introduced because of Adam and Eve’s sin.

Most scientists and theologians, up until this time, attributed the fossils to the destruction of the earth by the Flood of Noah’s day. But once the concept of a very old earth began to gain support, something had to be done with the fossils. Theologians led the way to general acceptance of this idea by proposing a number of possibilities, each of which claimed to salvage the Bible in the face of what they feared was contrary evidence.

Damaging compromise concepts included the idea that Noah’s Flood was only the last in a long series of world-altering catastrophes, with most of the fossils dating from long-ago floods. Others began to propose that the Flood of Noah was ‘tranquil’, that it covered the mountains without leaving any fossil or geologic trace, or held to a local flood which covered only the Mesopotamian Valley, with the fossils predating that flood. 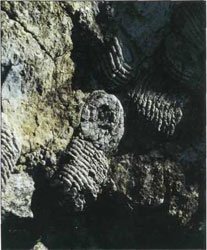 C. I. Scofield popularized a view called the ‘gap’ theory, which placed vast eons of time between verses 1 and 2 of Genesis 1, for, as he wrote in his reference Bible, ‘Relegate fossils to the primitive creation, and no conflict of science with the Genesis cosmology remains’(page 4). More popular compromises today are the ‘day-age’ theory…which proposes that the days of Genesis were long periods of time during which the fossils were laid down—and theistic evolution, which disregards Genesis altogether. The up-and-coming compromise in evangelical seminaries today is the framework hypothesis, which holds that Genesis contains only spiritual truth, but not scientific or historical truth. Each of these purports to do away with the problem of fossils, but in reality, they only end up distorting Scripture.

What would lead Bible-believing Christians to accept speculations about the past by men who live in the present, who don’t know everything, who weren’t there in the past to see fossils laid down, and who deny the Word of God to start with? Why would Christians seek to twist the Bible to make it fit such speculations? The Bible is the record of One who does know everything about the past and the present. In it, the author plainly tells us that death entered the world as a result of man’s sinful actions. ‘The wages of sin is death’(Romans 6:23). (See also Genesis 2:17; 3:19; Romans 5:12; 8:2; etc.)

The Bible also tells us of the great worldwide Flood following the entrance of death, which would necessarily have laid down great deposits of water-borne sediments full of the dead remains of living things. The sediments have now turned into sedimentary rock, and the dead things have turned into fossils.

We can’t prove, from a strictly scientific perspective, the Flood of Noah. But the nature of the fossil records is just what we would expect to see from the record of the Bible. We would do well to trust the testimony of the One who was there to see the fossils laid down, rather than the speculations of those who weren’t!