Animals can show up in the oddest places. In modern society, we take for granted the ease of travel for both humans and animals. Animals can be transported from one side of the globe to another via trains, planes, and automobiles. They have traveled to be part of new zoos, to replenish or diversify breeding stock in sanctuaries, or to move to a more hospitable environment than where they were found. Any time animals are relocated, there is an extensive human effort to organize such a task. In part, this is why evolutionists have to scratch their heads when an animal in the fossil record shows up either in an unexpected location or at an unexpected time in history. This is the case with the newly discovered monkey fossils named Panamacebus transitus.

In 2012 and 2013, paleontologists were able to explore new exposed areas of earth in Panama as part of the Panama Canal expansion project. In a layer of ash fall, north of the Panama Canal, they found seven fossilized monkey teeth. The teeth were scanned in a CT scanner and compared against the teeth of other plattyrhines (New World monkeys). They were found to be similar to today’s modern capuchin monkey, but several defining characteristics convinced scientists that this was a different species of monkey from that of modern day monkeys or previously described extinct monkeys. Researchers were surprised not by the characteristics of the teeth but by where the teeth were found. 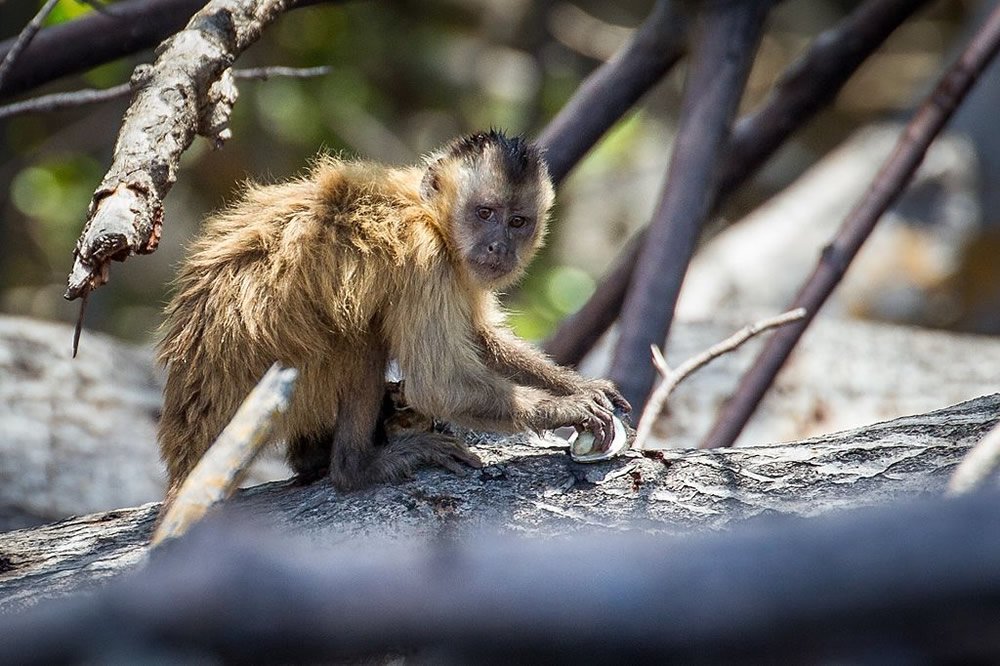 Evolutionists believe that monkeys were not in Central America until the Isthmus of Panama formed presumably 3–4 million years ago. They project that these fossilized teeth were approximately 20 million years old. For evolutionists, this poses the problem that these monkeys would have had to traverse 100 miles of open water to get to Central America from South America.

Evaluating the Data and Interpretations 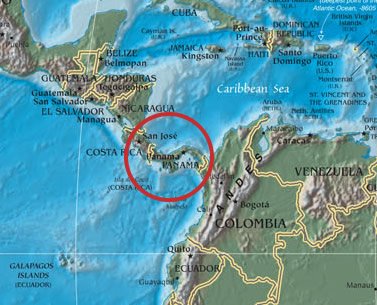 Isthmus of Panama. Image by PeepP, via Wikimedia Commons.

When research like this comes out, we have to pause and ask ourselves what we know. If you were to read the parent article from Nature magazine and its references, the word interpret comes up. Interpret is used in conjunction with the dating of the ash, the dating of the fossils, the phylogeny of this specimen to that of previously described monkeys, and the monkey’s habitat and migration patterns. We need to pause and confirm what the data are and separate them from the interpretations. What we know is that we have seven fossilized teeth with physical characteristics similar to that of a modern-day capuchin monkey. These teeth were found in Central America, north of the Panama Canal in an ash layer found to have zircon crystals in it. After fifteen pages of article, bibliographies, and graphics, this is what we know.

This may seem like a small amount of information for so much time, work, and effort these researchers have invested, but God is good in giving us His Word to help put the information we find in this world into perspective. In Genesis 6–9, the Bible tells us about the largest scale animal translocation project in history. Based on the history in the Bible, we know the Flood was approximately 4,360 years ago. The entire earth was covered in water. The only survivors for both man and beast (air-breathing, land-dependent animals) were those on the Ark that God instructed Noah to build. After the waters receded, God gave Noah and the animals the mandate to “be fruitful and multiply” (Genesis 9:1). The animals did what God asked of them, unlike us humans who did not disperse until after the Tower of Babel incident (Genesis 11).

Evolutionists were surprised by their presence in Central America, but we know they did what God asked them to do: they spread out all over the globe.

What does this mean for the animals and the fossils we find today? The majority of fossils we find today are in sedimentary layers that would have entrapped animals at the time of the Flood. However, the uppermost layers in the rock record, which are often thin, not so widespread, and contain the fossilized remains of mammals that are often alive today, were likely laid down since the Flood. This is the description of the localized volcanic ash layer that the monkey teeth were found in. Evolutionists were surprised by their presence in Central America, but we know they did what God asked them to do: they spread out all over the globe. Post-Flood this could be done in a variety of ways. In the case of land-dwelling animals, they could have traversed land bridges when the sea level was much lower during the post-Flood Ice Age, or they could have traveled on floating mats of vegetation. When Mount St. Helens blew in 1980, it uprooted huge trees that created a floating log mat on the nearby lake. Mount St. Helens is a miniature example of what happened as a result of the Flood, giving credibility to the idea that large, floating mats of logs and vegetation may have provided animals a ferry ride over to other parts of the world. It is possible that this is how animals came from Africa over to South and Central America. There are multiple examples of similar types of animals living on opposite sides of the same ocean basin with no present-day way of explaining how they could have relocated across such vast stretches of water.

Though the travels of Panamacebus transitus may appear long and arduous, it does not take a large leap of faith to see how God has provided and continues to provide for His creation. The Ark saved eight souls and the full spectrum of land-dwelling animal life from the globe-encompassing death and destruction of the Flood. God does the same for us today by providing us an Ark of salvation in His Son, Jesus Christ. Just as the ride on the Ark was not the end of Noah’s account but prepared him, his family, and the animals for the next chapter in history, God wants the same for you and me. This lifelong adventure starts by embarking on a relationship with Jesus Christ and continuing to explore this world with Jesus at the helm. We may not know where we will end up in this life, just as our monkey friend did not realize the significance of being in Central America, but God never monkeys around when it comes to His children’s eternal future.