Should Fragile Shells Be Common in the Fossil Record?

Experiments have shown that many shells disappear completely in a short period of time.

Have you ever walked along the beach collecting shells? Usually the best ones are thick and durable. Rarely do you find delicate shells in pristine condition.

In modern oceans, shells gradually dissolve in sea water or are consumed by other organisms. Experiments have shown that many shells, especially thin and fragile ones, disappear completely in a short period of time.

If the fossil record formed slowly, with individual rock layers taking hundreds or thousands of years to accumulate, you would expect fragile shell material to be relatively uncommon. Most of what we find should be thick and durable.

Creationists, on the other hand, would expect to find good preservation of all types of animals in the fossil record because we believe much of the record was made catastrophically during Noah’s Flood.

Let’s see what is actually found.

Taphonomy is the study of the process of decay and fossilization. Taphonomists have extensively studied the disintegration of shelly remains. They have run many experiments on crabs, snails, clams, and other animals with hard shells in modern underwater settings.1,2

As expected, the soft tissue is usually gone within days. Surprisingly, the hard shelly material can also be destroyed soon afterward (days to years) by a number of processes, including the dissolving action of seawater, gnawing, boring, currents, and animals churning through the ocean mud in search of nutrients.3,4 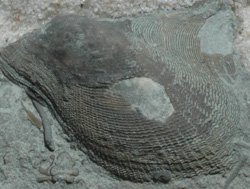 This ornamented fossil clam had to be buried quickly in order for its delicate details to be preserved. In modern oceans, thin, fragile shells like this are destroyed quickly. Most shell material preserved in modern oceans is thick, because thin shell material can be quickly destroyed. However, new studies show the fossil record is not biased toward thick-shelled organisms. This is evidence that most of the fossil record formed catastrophically. 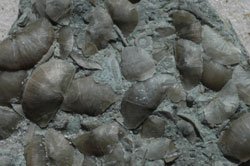 Mass accumulations of thin-shelled brachiopods are common in the fossil record. Even conventional geologists agree that deposits like this were made rapidly during storm events. It is common for thin shells in today’s oceans to be completely destroyed by boring and encrusting organisms. 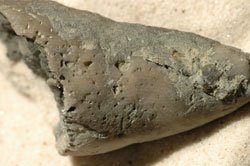 This fossil horn coral, found in the Flood deposits near Cincinnati, Ohio, had been bored and encrusted by various organisms prior to its burial. Organisms bore for food, nutrients, or domiciles. Encrusters, like the bryozoans (along the top edge of the coral), use the coral’s hard surface as a foundation for their colony.

Rapid decay of hard shelly material in modern oceans has created a paradox for old-age, uniformitarian thinking. Taphonomist Thomas Olszewski is puzzled by the apparent discrepancy between modern studies and the fossil record:

Actualistic studies show that taphonomic destruction of the remains of shelly marine organisms can be completed on the order of days to years. Yet, radiometric and amino-acid age dating show that shells in settings where taphonomic destruction is ongoing can be 10s, 100s, or even 1000s of years old. In order to resolve this seeming paradox, a number of authors have suggested that shells survive to great age by being sequestered temporarily from taphonomically destructive conditions and then reintroduced to the taphonomically active zone (that part of the sediment column in which a fossil can be modified or destroyed) by sedimentary mixing processes.4

Note the suggestion that shells must be “sequestered” from decay for many years in order to resolve the paradox between belief in old age and the observed rapid rate of shell disintegration. What Olszewski is proposing is that shell material must, upon death, be buried deep in ocean mud if it has any hope of preservation. This is the only way to protect the material from destruction.

The real paradox for the old-age uniformitarian is that ocean mud is not accumulating fast enough for preservation to occur; so why does the fossil record have shelly material at all, if it has taken long periods of time to accumulate?

Using the online Paleobiology Database (PBDB), scientists compared 150 of the most common genera of marine shellfish and snails (brachiopods, bivalves, and gastropods) with each other (450 total genera). The authors conclude:

Contrary to taphonomic expectation, common genera in the PBDB are as likely to be small, thin-shelled, ribbed, folded, or spiny. In fact, only six of the 30 tests we performed showed a statistically significant relationship between durability and occurrence frequency, and these six tests were equally divided in supporting or contradicting the taphonomic expectation.

The authors were surprised and confounded by the results because modern observations did not match their expectations. They concluded that the fossil record was not biased towards more durable shelly material.

One explanation that they did not consider, that would readily explain their results, is the catastrophic formation of much of the fossil record. The Flood would have indiscriminately buried both fragile and durable material together.

Creationists have correctly argued for a long time that preservation of soft body parts requires special conditions or even catastrophic processes. Now we can make the same argument for many of the hard parts found in the fossil record.

Previous Article Taking Back the Rainbow Next Article Noah the Evangelist