The Karoo Vertebrate Non-problem: 800 Billion Fossils or Not

Responding to attacks by anti-creationists, I have located the source of the claim that some 800 billion fossils exist in the sedimentary rocks of the Karoo system and demonstrate that this figure is largely conjectural. Nevertheless, contrary to anti-creationist arguments, it is completely possible for that many land vertebrates to have been simultaneously alive at one time (i.e. in the pre-Flood world). The pioneering creationists, Whitcomb and Morris, were entirely correct to cite the Karoo system as an example of an exceptional concentration of fossils, irrespective of the accuracy or otherwise of the 800 billion figure.

The bulk of the fossiliferous sedimentary rocks of the Karoo system in South Africa are assigned to the Permian and Triassic of the uniformitarian time scale. The fossils in this system are famous world-wide for their concentration as well as for their status in the presumed evolution of therapsid reptiles into mammals. In 1961, Whitcomb and Morris cited a figure of 800 billion vertebrates in the Karoo system of South Africa.1 Subsequently, anti-creationists have spun a series of bogus arguments about the imagined impossibility of that many vertebrates having been alive at one time (e.g. the pre-Flood earth). Though long refuted, the arguments keep being repeated, with the effect of misleading the unsuspecting. Failing that, anti-creationists resort to ‘Plan B’: Attack Whitcomb and Morris for having cited this figure.

It has not proved easy to trace the origins of the 800- billion figure. Whitcomb and Morris had cited an article by Newell,2 who in turn had mentioned Robert Broom having come up with the 800-billion figure. Unfortunately, Newell had not provided any reference to Broom’s work, and so the original computation was difficult to find.3

Compared with any other fossil deposit in the world the Karroo [modern spelling Karoo] must be regarded as phenomenally rich. Our fossil beds cover an area of about 200,000 square miles [518,000 square kilometres] in almost any area of which fossils may be found. Some areas are rather poor; others are extremely rich. Great areas are covered by wind-blown dust, and vegetation; and as a rule it is only in water courses, and on slopes that fossils can be seen. I estimate that there are lying today exposed to view the fossil remains of five animals on average in every square mile [1.93 animals on average in every square kilometre]. In some areas there are 100; in some none. For every fossil that is exposed to view there must be a 1,000 hidden by dust and talus. If there are the remains of 1,000 animals on the shale surface on an average in every square mile [386 animals in every square kilometre], there would be in the Karroo [Karoo], if the wind-blown sand and dust could be removed, 200,000,000 fossil animals exposed to view. The fossiliferous beds are of great thickness. In some areas they must be 4,000–5,000 feet [1,200–1,500 m] thick; in others perhaps only 2,000 feet [600 m]. It would be a very conservative estimate that would put the average thickness at 2,000 feet [600 m], and at every few inches we have another page of the book, and another series of fossils to be revealed. I thus estimate that in the whole Karroo [Karoo] formation there are preserved the fossil remains of at least 800,000,000,000 animals.4

It is not difficult to see from the above that Broom’s 800-billion figure is, at best, an educated guess. The only firm values are those for the Karoo area and perhaps the average thickness of the basin-wide sedimentary deposit. The numbers of obscured fossils per regional area of outcrop, and the numbers of such fossiliferous layers per unit of thickness, are obviously conjectural. Even the gross estimates of productive and non-productive areas of the Karoo outcrop vary greatly according to specific geographic region,5 and it is difficult to see how an ‘average’ figure for the entire Karoo could be derived without considerable mapping and crunching of data.

Did Creationists Whitcomb and Morris err? Does the questionable validity of Broom’s estimate mean that Norman Newell, and, in turn, John C. Whitcomb and Henry M. Morris, had been incorrect to cite the Karoo reptiles? Certainly not. Let us examine why in fact they had cited this figure. The point of all three authors had been the extreme richness of the fossil-bearing beds of the Karoo. It had not been the precise number of reptiles entombed in those deposits. This richness is an inescapable fact that is completely independent of the accuracy or otherwise of Broom’s guesstimate. In fact, numerous geologists (including DuToit,6 Haughton,7 and, more recently, Smith8 ) have called attention to the richness of the Karoo fauna, and none had claimed that this richness was in any way contingent upon the 800-billion figure being accurate. In fact, none of these three uniformitarian authors had even mentioned the 800-billion figure. It can therefore be concluded that Whitcomb and Morris1 had been correct to mention the Karoo system as one where large numbers of fossils are preserved, and one which has few if any actualistic analogues for the preservation of such numbers of fossils. That was, and is, the point made by Whitcomb and Morris. Anti-creationists who say otherwise are merely trying to confuse the issue.

Can 800 Billion Reptiles Be Alive Simultaneously?

Over the years, various anti-creationists have tried to convince us that this number of reptiles could not possibly have existed at one time. We were given fanciful visions of there not being enough sunlight to even support the plants that would be necessary to feed such a large global population of reptiles. As it turns out, such arguments sound very intellectual, but are totally foolish. 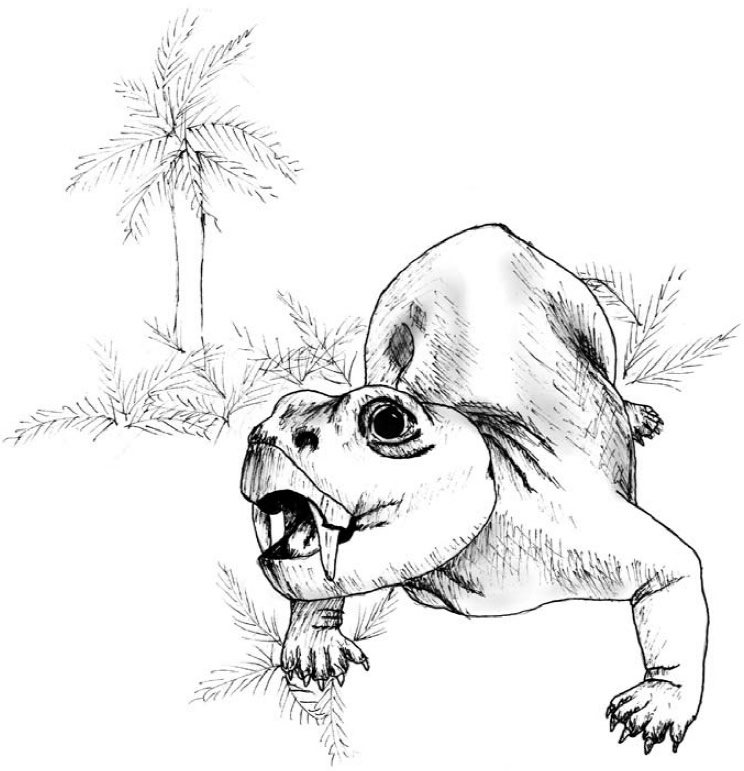 A reconstruction of the diconodont, Diictodon, from the Karoo of South Africa.13 Courtesy Louise Forbes.

As we have seen, the validity or otherwise of Broom’s guesstimate is totally irrelevant to creationist considerations of the Karoo system. Let us, however, assume that the 800-billion figure is correct. But how much geographic area did these creatures have available to them during life? We know that the Karoo reptile fossils exist at a concentration notably higher than most rocks elsewhere on earth, so it stands to reason that they were washed into the area of present day South Africa during the Flood.9 Let us, however, conservatively assume that they originally lived in an area only equal to present-day subequatorial Africa. This amounts to an area of 10 million square kilometers, implying a population density of 800 reptile individuals per hectare.10

Having failed in their original argument, critics have next complained that regionally-dense reptilian populations should not be extrapolated to subcontinental scale. The opposite is the case. Since only a tiny fraction of today’s earth’s surface approaches anywhere near maximal productivity, there is nothing wrong with allowing for more of the earth’s surface to approach maximal productivity — especially when we are dealing with upper limits of global reptilian populations. Moreover, it is universally accepted that the antediluvian earth must have been considerably more hospitable to life than is its present impoverished post-Flood remnant. So what is today an atypically productive region with an atypically-high local reptile population most probably was the norm in the antediluvian world.

Although of questionable validity, the 800-billion figure in no way vitiates creationist discussions about the richness of the Karoo vertebrate fauna. Nor are creationists in any way to blame for the poor documentation of the origins of this figure in the evolutionist literature. Finally, even if there actually are 800 billion vertebrates in the Karoo, these individuals could easily have been all simultaneously alive in the pre-Flood world. Once again, an intellectual-sounding anti-creationist argument is shown to be false.

As noted earlier, there is much more to the Karoo system than its numbers of fossils. Continued research should be performed by creationist scientists on the alleged transitional status of therapsid reptiles as a precursor to mammals. Moreover, the fossil succession of vertebrates within the Karoo should also be examined rigorously in the light of Flood geology.

John Woodmorappe has an M.A. in geology and a B.A. in biology, from a midwestern US state university. He is a science educator by profession. He is the author of Studies in Flood Geology, Noah’s Ark: A Feasibility Study, and the recently released The Mythology of Modern Dating Methods.