God Invented the Rainbow and Marriage—Not the President

The Huffington Post published this picture (see below) of the White House lit up with the colors of the rainbow, quoting this statement from the White House:

“Tonight, the White House was lit to demonstrate our unwavering commitment to progress and equality, here in America and around the world,” the White House said in a statement. “The pride colors reflect the diversity of the LGBT community, and tonight, these colors celebrate a new chapter in the history of American civil rights.”

Well, I do have a message for President Obama and five members of the US Supreme Court:

You did not invent marriage. God did.

Marriage was instituted by God when He created man male and female—Adam and Eve. In fact, Jesus Christ the God-man quoted from Genesis when He taught that the meaning of marriage is based on the history in Genesis (see Matthew 19:4-6)—that God made the first marriage with one male and one female and told them to multiply and fill the earth.

The president and the Supreme Court need to repent and return to the One who is in authority over them—the One who is the absolute authority, the Creator God who also put them in positions of authority (Daniel 4:3, 17, 37). He is the Creator God against whom these Washington leaders have rebelled as members of Adam’s race—the Creator God who stepped into history to pay the penalty for our sins so they can be reconciled to their God. With the rebellious person, God is “patient toward you, not wishing that any should perish, but that all should reach repentance” (2 Peter 3:9). Yes, the Supreme Court and the president need to repent of their mocking the first and most fundamental of human institutions that God ordained in Scripture: the family that God ordained with one man and one woman in marriage.

The president did not invent the rainbow; God invented it, and He put the rainbow in the sky as a special reminder related to Noah’s Flood. God had sent the global Flood in Noah’s time as a judgment because of man’s wickedness in rebelling against the Creator. After the Flood had subsided, we read the following in Genesis:

Then God spoke to Noah and to his sons with him, saying: “And as for Me, behold, I establish My covenant with you and with your descendants after you, and with every living creature that is with you: the birds, the cattle, and every beast of the earth with you, of all that go out of the ark, every beast of the earth. Thus I establish My covenant with you: Never again shall all flesh be cut off by the waters of the flood; never again shall there be a flood to destroy the earth.”

Yes, the rainbow was set up by God as a sign to remind us that there will never again be a global Flood as a judgment. But one day there will be another global judgment—the final judgment—and it will be by fire:

But the heavens and the earth which are now preserved by the same word, are reserved for fire until the day of judgment and perdition of ungodly men.

But, beloved, do not forget this one thing, that with the Lord one day is as a thousand years, and a thousand years as one day. The Lord is not slack concerning His promise, as some count slackness, but is longsuffering toward us, not willing that any should perish but that all should come to repentance.

But the day of the Lord will come as a thief in the night, in which the heavens will pass away with a great noise, and the elements will melt with fervent heat; both the earth and the works that are in it will be burned up. Therefore, since all these things will be dissolved, what manner of persons ought you to be in holy conduct and godliness, looking for and hastening the coming of the day of God, because of which the heavens will be dissolved, being on fire, and the elements will melt with fervent heat? Nevertheless we, according to His promise, look for new heavens and a new earth in which righteousness dwells. (2 Peter 3:7–13)

The rainbow should actually remind us of four things:

Yes, we need to take back the rainbow and worship the One who invented the rainbow, and every time we see it be reminded of its true message.

I was reminded of this recently when after a strong storm came through Williamstown, Kentucky, where we are building a life-size Ark, we saw a beautiful rainbow. In this photo the rainbow can be seen over the Ark Encounter construction site. (I’ve added an outline of the Ark itself for you to understand the construction site.) 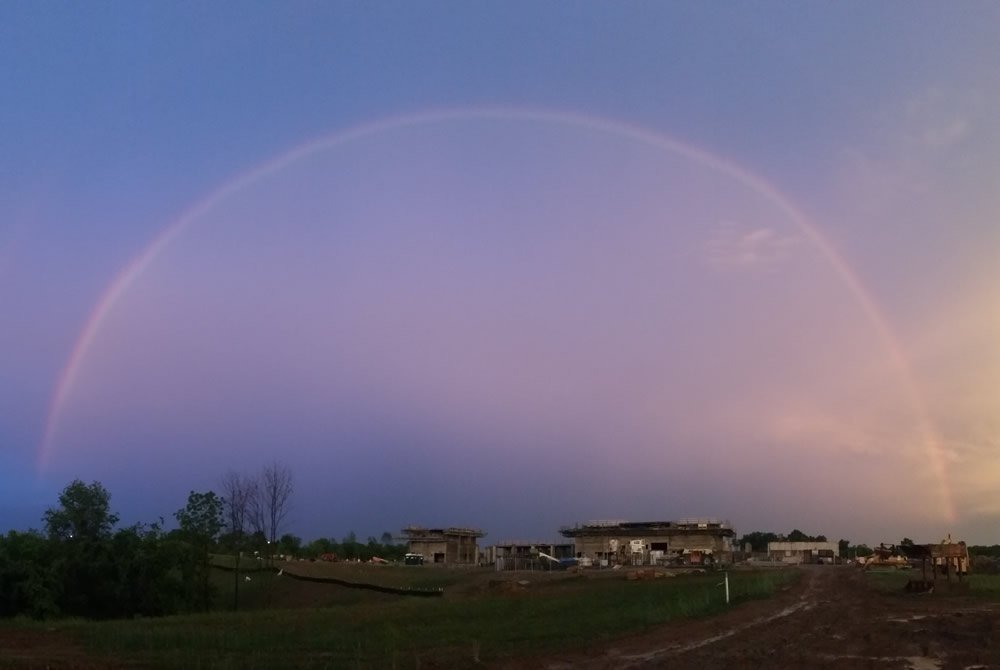 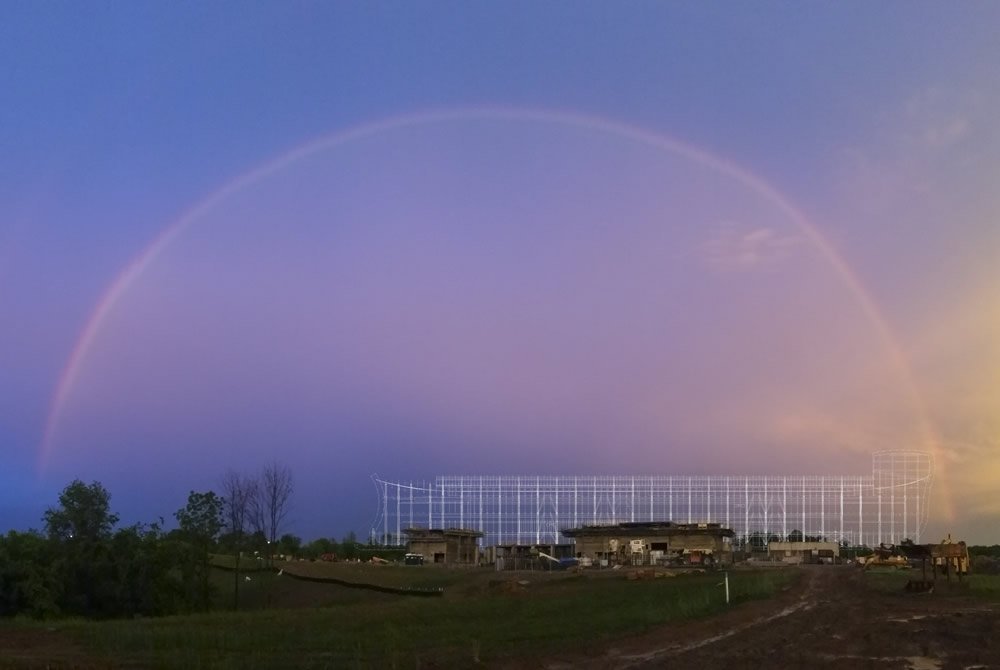 Jesus said, “But as the days of Noah were, so also will the coming of the Son of Man be. For as in the days before the flood, they were eating and drinking, marrying and giving in marriage, until the day that Noah entered the ark,” (Matthew 24:37–38). Jesus used the event of Noah’s day as a reminder of past judgment and future judgment. Jesus says, “Therefore you also be ready, for the Son of Man is coming at an hour you do not expect” (verse 44).

I believe the life-size Ark will be a sign to this age—a reminder—that God’s Word is true and that mankind is sinful, that God is holy and judges sin. But God is a merciful loving God and has not only provided the way of salvation, but paid for it Himself and offers it free to all who will receive:

As you watch this short video of the rainbow over the Ark construction site, meditate on the fact that the real meaning of the rainbow is to remind us that even in judgment, God provides salvation—and that God keeps His Word.

The president of the United States and the Supreme Court justices who voted to shake their fist at God’s holy institution of marriage think they have had the last word—but they won’t:

I have sworn by Myself; The word has gone out of My mouth in righteousness, And shall not return, That to Me every knee shall bow, Every tongue shall take an oath. (Isaiah 45:23)

For it is written: “As I live, says the Lord, Every knee shall bow to Me, And every tongue shall confess to God.” (Romans 14:11)

That at the name of Jesus every knee should bow, of those in heaven, and of those on earth, and of those under the earth. (Philippians 2:10)

And Mr. President, gay “marriage” is not a civil rights issue; it’s a moral issue! Here is a dire warning from the Bible for the justices and the president:

For this reason God gave them up to vile passions. For even their women exchanged the natural use for what is against nature. Likewise also the men, leaving the natural use of the woman, burned in their lust for one another, men with men committing what is shameful, and receiving in themselves the penalty of their error which was due. And even as they did not like to retain God in their knowledge, God gave them over to a debased mind, to do those things which are not fitting; being filled with all unrighteousness, sexual immorality, wickedness, covetousness, maliciousness; full of envy, murder, strife, deceit, evil-mindedness; they are whisperers, backbiters, haters of God, violent, proud, boasters, inventors of evil things, disobedient to parents, undiscerning, untrustworthy, unloving, unforgiving, unmerciful; who, knowing the righteous judgment of God, that those who practice such things are deserving of death, not only do the same but also approve of those who practice them. (Romans 1:26–32)

Now, we’re taking back the rainbow as well!