The discovery of the jagged peaks under Antarctica’s ice surprised scientists, who had expected the landscape to be worn flat after millions of years of erosion. 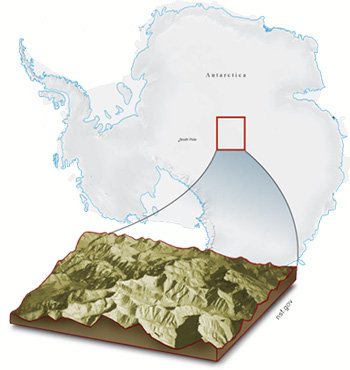 NO TIME TO ERODE When scientists measured the topography of the Gamburtsev mountains under Antarctica’s ice, they were surprised to find little erosion. This finding indicates that the ice sheet formed recently.

How could anyone miss a mountain range the size of the European Alps? Because the mountains, called the Gamburtsevs, lie deep under the ice of Antarctica. Though originally detected over 50 years ago, the mountains were only recently measured (by ice-penetrating radar and seismometers).

Scientists previously assumed the Antarctic landmass would be mostly flat below the ice—supposedly smoothed down by millions of years of glacial action. Instead, radar scans of the mountains revealed jagged peaks with little erosion, indicating that the ice sheet formed quickly and recently.

The discovery shouts out that the Bible’s record of earth history makes sense of our world. Creation geologists believe the mountains formed during and at the end of Noah’s Flood about 4,300 years ago, and then they were covered during the Ice Age that followed the Flood.