The Sexual Revolution’s Next Battle: “Love Has No Age” 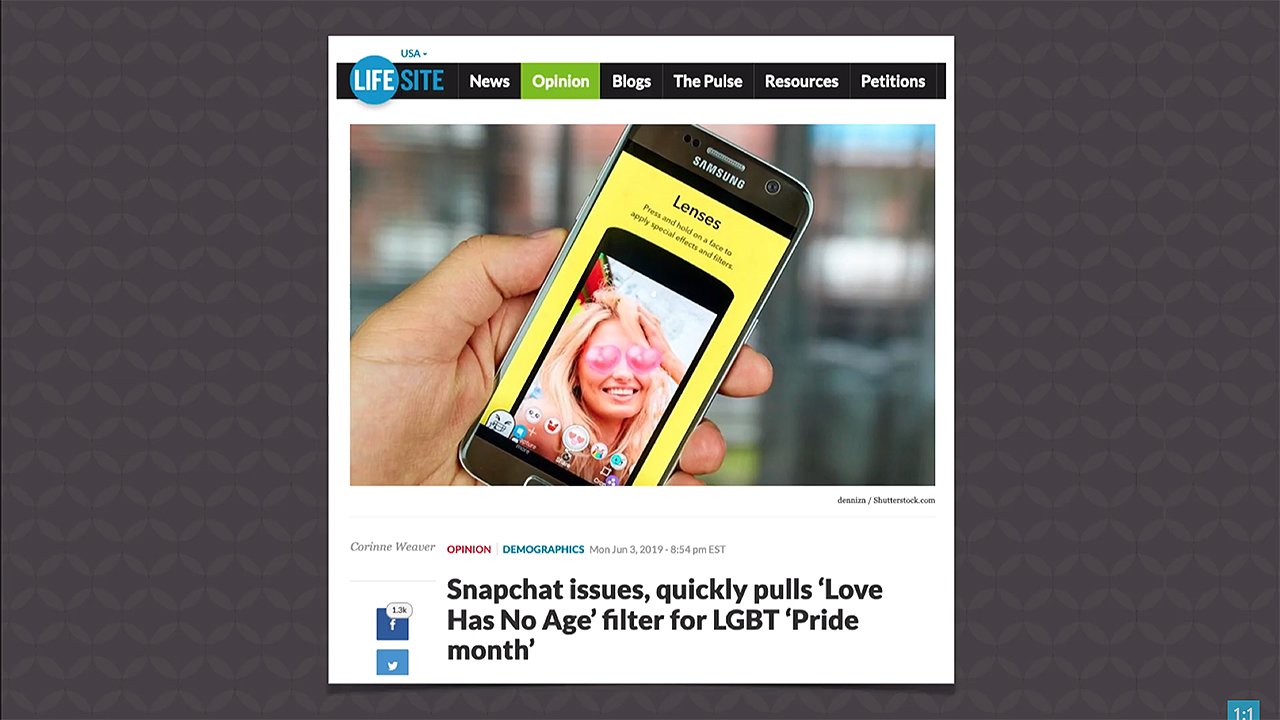 According to the sexual revolution, love has “no gender, race, or religion”—but does “love” have an age? Well, according to social media site Snapchat—it doesn’t. At least, it didn’t for two days. As part of their “Love Has No Labels” campaign during so-called “Pride Month” (June), Snapchat featured a series of filters, including one that read “love has no age.” This last one was quickly pulled, however.

Pedophilia is next on the sexual revolutions to-do list. We’ve been saying this for some time. After all, once there’s no absolute authority, and man determines “right” and “wrong,” then anything goes! The war on family—as God has defined it—is increasingly a war on children. The secular culture is out to sexualize children (through things like radical sex education—which in reality is just indoctrination into a secular view of sexuality—and drag queen story hours) and to make sexual relations with children an acceptable thing. Because once you abandon the authority of the Word of God, anything goes. And once you’ve opened the door to sexual immorality, where do you stop? It quickly becomes a matter of everyone doing what’s right in their own eyes (Judges 21:25).

It appears that Snapchat was testing the waters, seeing if it was time to release such a thing. But they pulled the filter, which shows enough people stood up and said “no!” to convince them it wasn’t time for that yet. Believers, we must stand up and say, “no!” We must stand against the sexualization of children and stand for the truth of God’s Word and the gospel. It’s a reminder there’s a war raging around us, and we must “contend for the faith” as we’re instructed in Jude. Also, we must keep in mind the nature of this war:

God’s Word is clear on sexuality—we’re created male and female (Genesis 1:27), marriage is for one man and one woman (Genesis 2:24), and sexual relations are God’s good gift, designed for marriage only (1 Corinthians 6:18; Hebrews 13:4). And Scripture is also clear on God’s love for children, the helpless, and the defenseless (Psalm 82:3–4)—and anything that takes advantage of them, hurts them, or causes them to stumble is serious in the eyes of God.

But whoever causes one of these little ones who believe in me to sin, it would be better for him to have a great millstone fastened around his neck and to be drowned in the depth of the sea (Matthew 18:6).

Answers News’ regulars Avery Foley and Bodie Hodge and guest Roger Patterson, AiG manager of education resources, discussed this news story today. Answers News is our twice-weekly news program filmed live before a studio audience here at the Creation Museum and broadcast on my Facebook page and the Answers in Genesis Facebook page. We also covered the following interesting topics: