Will we have the courage of the great reformer Martin Luther, who despite the fact he knew he could be killed, stood before authorities 500 years ago and reportedly said: “Here I stand [on God’s Word]; I can do no other; God help me”? 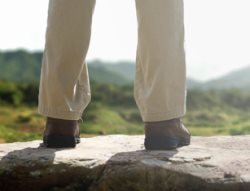 Are we all prepared to be the Christian “heroes” God wants us to be, and stand our ground?

In fact, who would be prepared to be like those believers described in the Bible who stood their ground on God’s Word? They were, according to Hebrews 11, “tortured, not accepting deliverance, that they might obtain a better resurrection. Still others had trial of mockings and scourgings, yes, and of chains and imprisonment. They were stoned, they were sawn in two, were tempted, were slain with the sword. They wandered about in sheepskins and goatskins, being destitute, afflicted, tormented—of whom the world was not worthy. They wandered in deserts and mountains, in dens and caves of the earth.”

Recently, a football star and a hero to many, Tim Tebow, cancelled a speaking engagement at First Baptist Church in Dallas. Apparently, he bowed to political and professional pressure because the pastor of the church has taken a bold stand on biblical marriage: one man and one woman. Many in the secular press twisted the pastor’s statements and (as they have done with us over and over), made false accusations, often using highly emotional language.

Now, take out Tebow’s name and insert your own. The massive moral shift taking shape around us is fast eliminating any neutral ground on this issue. Those celebrating the moral normalization of homosexuality will demand an answer from us all. Giglio [a pastor who was to have prayed at the presidential inauguration in January] and Tebow withdrew from controversial appearances, but they will not evade the demand to answer the fundamental question, and any Christian who will not join the moral revolution will be marginalized as a moral outlier in the larger society.

Evangelical Christians are now called upon to think strategically about what it means to speak truthfully and lovingly to a society that increasingly sees us as the moral outlaws. Clearly, we must watch our speech carefully, measuring every word for truth and tone and avoiding incendiary sound bites. We must also guard our hearts toward the persistent temptation towards self-righteousness. But, at the same time, even the most humble statement of biblical truth can now be turned into a sound bite described as hate speech and a refusal to affirm the normalization of homosexuality is turned into repulsive intolerance.

We now face no shortage of arguments for capitulation, but abandoning the truth of God’s Word is not an option. We deny the gospel if we deny the sinfulness of sin. That sin. Every sin. Our sin.1

AiG’s theme for the next two years is “Standing Our Ground; Rescuing Our Kids.” Our emphasis will be to boldly stand on God’s Word and help rescue our children from this evil generation.

My challenge to all of us is this: are we all prepared to be the Christian “heroes” God wants us to be, and stand our ground, regardless of how the culture may mock and attack us?

As Christians, we are instructed to:

Be diligent to present yourself approved to God, a worker who does not need to be ashamed, rightly dividing the word of truth (2 Timothy 2:15).

We need more Christian heroes like Dr. Duane Gish, a bold creationist who passed away as we were about to go to print.

Let’s raise a generation that will stand boldly for God and His Word! We can equip you in many practical ways, including through the special teaching for children, teens, and adults at this summer’s Answers Mega Conference.

Previous Article America Under Judgment? Next Article The End of an Era