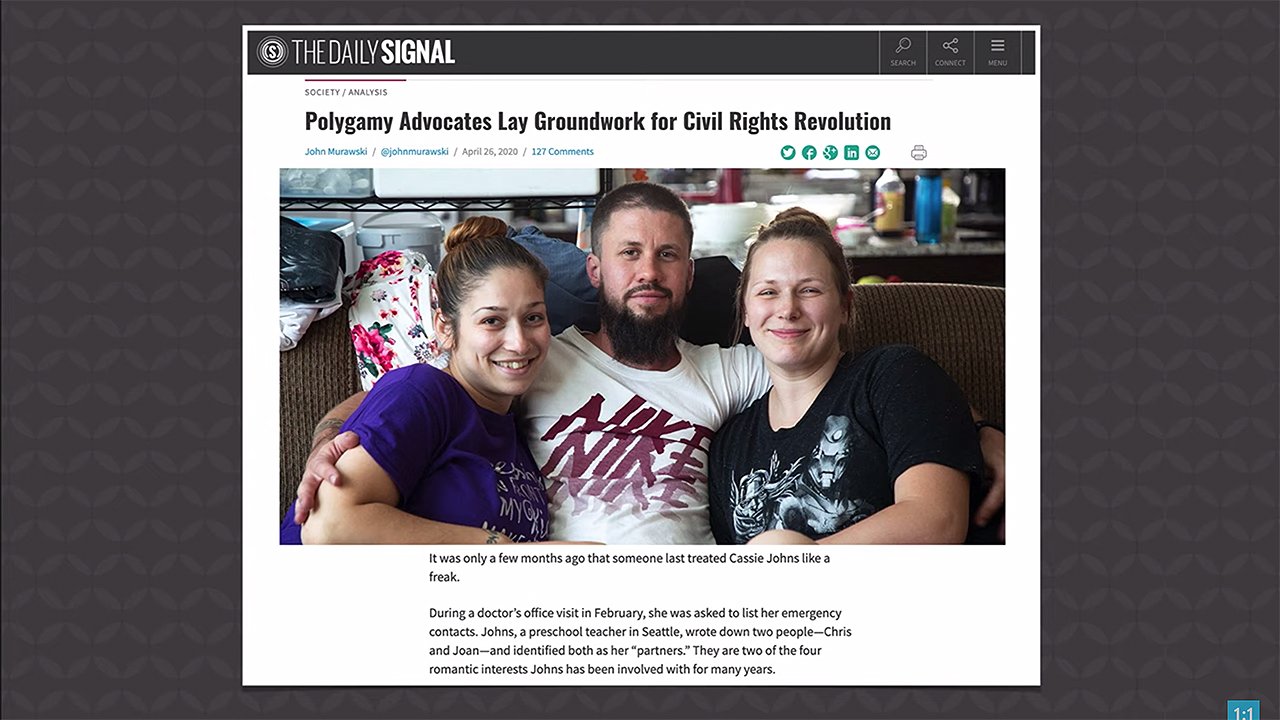 Don’t kid yourself. Legalized polygamy and the acceptance of other “sexual orientations” such as polyamory is coming to America. The rumblings of this next social upheaval have already started, as a recent article highlighted, with activists pushing to have what’s called “polyamory” protected under a brand-new class, “relationship structure.” Universities are forming clubs, TV shows are featuring polyamorous couples, a polyamorous flag has been devleoped, and “consensual nonmonogamy” is being researched and recognized within academia.

Once gay “marriage” was legalized, I warned that once the door opened to reintpret marriage, ultimately anything can go.

Once gay “marriage” was legalized, I warned that once the door opened to reinterpret marriage, ultimately anything can go. I predicted we would see a big push to legalize polygamy—and that is happening. I also predicted there would be a push to legalize pedophilia and we’re seeing moves in that direction from certain quarters.

This article quotes the co-chair of the Consensual Non-Monogamy Task Force (created by the American Psychological Association) as saying,

There is plenty of evidence that consensual non-monogamy is an emerging civil rights movement . . . I’ve heard from a number of people advocating for relationship structure diversity over the past 20 years who are elated about this issue finally gaining traction.

In other words, buckle up and prepare for the next so-called “civil rights” battle: relationship structure.

So Why a Diversity in “Relationship Structure”?

Here are just some of the arguments for polygamy/diversity in relationship structures presented by various individuals in this lengthy article:

Do these arguments sound familiar? They should! They’re appealing to stigma, the widespread nature of the behavior, history (even the Bible’s history), and the “normalcy” of the people involved. In other words, these are all the same types of arguments used by the LGBT lobby to push for gay “marriage” and the removal of the “stigma” around gay, lesbian, bisexual, etc. relationships. This isn’t really new territory—we’ve seen all these arguments before. (And Christians and others have pointed out for years that the arguments LGBT activists used would be coopted by polyamory/polygamy activists to argue for legal protections for these relationships.)

How Should Christians Respond?

Are you equipped to respond when polygamy or “relationship structure” becomes the new buzzword of our culture?

Are you equipped to respond when polygamy or “relationship structure” becomes the new buzzword of our culture? Are your children equipped to know how to think biblically about this issue so they won’t be dragged away by unbiblical and sinful thinking?

So how should we think about this emerging issue?

Well, a few thoughts before we jump into Scripture. First, this isn’t about “civil rights” any more than gay “marriage” or transgender was. They were never civil rights issues—they were and are morality issues. In other words, what is right and what is wrong? We don’t get to decide for ourselves what’s right and wrong—God decides. He has given us his Word, a written revelation of God’s will to us, and it never changes. It doesn’t matter if our culture changes, if “stigmas” go away, if the majority want something—God’s Word determines right and wrong and it applies to all people at all times.

Second, people will have sinful desires and tendencies. They always have and they always will. Certain individuals identifying with a sinful lifestyle doesn’t suddenly make that lifestyle moral. Sin—sexual sin in this case—is at the root of these lifestyle choices.

People may feel that “consensual non-monogamy” is a good choice for them, but that doesn’t make it right.

Third, morality isn’t determined by how we feel. People may feel that “consensual non-monogamy” is a good choice for them, but that doesn’t make it right. God’s Word—not our fickle feelings—determines morality.

Fourth, “consensual non-monogamy” is just a more pleasant way of saying fornication and adultery. These are sinful behaviors, condemned by our Creator. Changing the name and putting a pretty face on sin doesn’t change the heart behind it—a heart that needs to repent and turn to Jesus Christ for salvation.

Lastly, the article mentions ongoing research that attempts to demonstrate that polyamory isn’t bad for children, couples, or families. But, frankly, it doesn’t matter what these studies discover. It’s not a matter of “can we show that this isn’t harmful—or at least isn’t too harmful”—it’s a question of what is moral: what is right and wrong. (Also, keep in mind that one study says one thing and then another study says another thing; these social science fields are notorious for that kind of ambiguity!)

What Does God’s Word Say?

As I’ve stressed above, God’s Word is the authority for morality. So what does God’s Word say to this redefinition of marriage and the family?

The Foundation for Marriage Is Genesis

Well, the foundation for marriage and, by extension, the family unit is given in Genesis. God created two people—Adam and Eve—and brought them together into the very first marriage. God bringing one man and one woman together in marriage, and calling it “very good,” (Genesis 1:31) is God forever defining marriage.

Jesus reaffirmed, within the context of teaching about divorce, that God’s design for marriage is one man for one woman for life,

He answered, “Have you not read that he who created them from the beginning made them male and female, and said, ‘Therefore a man shall leave his father and his mother and hold fast to his wife, and the two shall become one flesh’?” (Matthew 19:4–5)

Marriage is not some nebulous idea that can change with each generation’s ideas about sexuality, gender, and relationships. It is forever established and ordained by its Creator—one man for one woman for life. Ultimately, there’s only one type of marriage: the marriage God ordained in Genesis.

What About the Old Testament Examples?

Just because something is described in the Bible, doesn’t mean it is prescribed.

Not at all, and for several reasons. Firstly, just because something is described in the Bible, doesn’t mean it is prescribed. The Bible is a book of history—it records what happened. That doesn’t mean that, by recording an event, God is saying such actions were moral. Indeed, when polygamy is recorded, the problems that arise from such a union—jealousy, rivalry, the break-up of families, disfunction, and more—are highlighted.

Secondly, we should not mistake God’s patience with sin as his permission. He has always worked through sinful people (and continues to do so, with you and me). His patience in forbearing with them when they sinned and violating his design in no way implies that God was approving or winking at their sin. It shows the long-suffering forbearance of our good, merciful God.

So why might God have tolerated polygamy in the Old Testament? Well, Jesus’ answer to the question about divorce offers a possible explanation. Let’s look at the verses surrounding verses 4 and 5 that I quoted above,

And Pharisees came up to him and tested him by asking, “Is it lawful to divorce one's wife for any cause?” He answered, “Have you not read that he who created them from the beginning made them male and female, and said, ‘Therefore a man shall leave his father and his mother and hold fast to his wife, and the two shall become one flesh’? So they are no longer two but one flesh. What therefore God has joined together, let not man separate.”

They said to him, “Why then did Moses command one to give a certificate of divorce and to send her away?” He said to them, “Because of your hardness of heart Moses allowed you to divorce your wives, but from the beginning it was not so. And I say to you: whoever divorces his wife, except for sexual immorality, and marries another, commits adultery.” (Matthew 19:3–9, emphasis added)

Note verse 8: “because of your hardness of heart Moses allowed you to divorce your wives, but from the beginning it was not so.” Divorce was never part of God’s initial design and yet he tolerated it, and even made provision for it in the Law (and even now under certain specific circumstances), because of “hardness of heart.” Polygamy was never part of God’s design—that is clear from Genesis and other places. Yet God graciously chose to tolerate the violation of his design (as he did and does in cases of divorce), likely because of “hardness of heart.”

Christ and the Church

Ephesians 5:31–32 is another New Testament passage that quotes from Genesis 2:24,

“Therefore a man shall leave his father and mother and hold fast to his wife, and the two shall become one flesh.” This mystery is profound, and I am saying that it refers to Christ and the church.

The one-flesh union of marriage is a physical, tangible representation of the union of Christ and the church.

Ultimately, we can say the same thing about the “relationship structure” argument that we said about the gay “marriage” push—this isn’t really about marriage. This is about the radical redefinition of marriage and the family—and the desire for anyone to be allowed to do anything they want in regard to their sexuality, with no barriers to their pleasure and the fulfillment of all their desires. And Scripture is not silent in regard to this attitude.

Sexual immorality of any kind is categorically condemned all throughout Scripture. God takes our sexuality and marriage seriously. Those who flaunt God’s design for their sexuality and their marriage will eventually be judged for their sin.

Let marriage be held in honor among all, and let the marriage bed be undefiled, for God will judge the sexually immoral and adulterous. (Hebrews 13:4)

Don’t be taken captive by clever-sounding arguments or emotional stories that are crafted to tug on your heartstrings. Stand on God’s Word and arm yourself with truth to battle the lies of a culture rushing headlong into destruction. There’s an aggressive war going on against marriage, the family, and children.

This item was discussed yesterday on Answers News with our newest team of hosts—Roger Patterson (he’s been a frequent guest on the program), Tim Chaffey, and Dr. Jennifer Rivera (yesterday was her first episode!). Answers News is our twice-weekly news program conducted here at the Creation Museum and broadcast on my Facebook page and the Answers in Genesis Facebook page. We also covered the following topics:

Watch the entire episode of Answers News for May 6, 2020.