The Big Bang “Says Nothing About How the Universe Was Created” 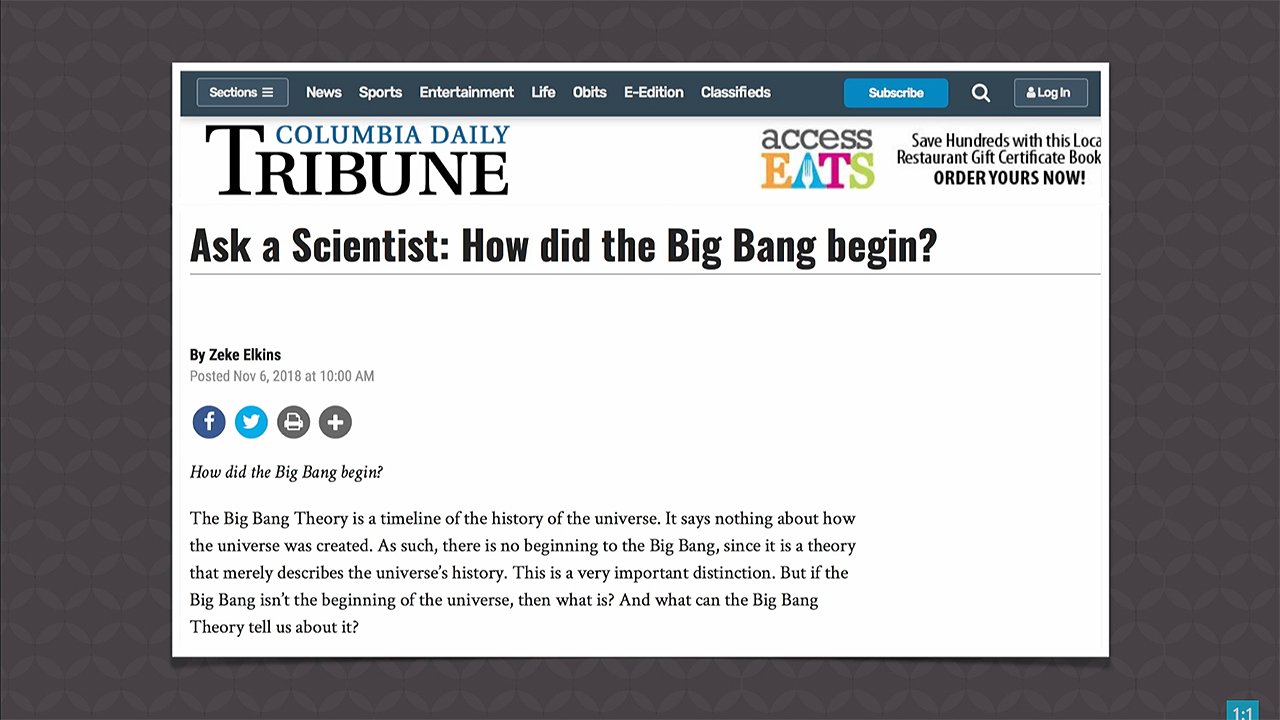 A short article appeared recently in an “Ask a Scientist” column in response to the question, “How did the Big Bang begin?” The scientist explains, “The Big Bang Theory is a timeline of the history of the universe. It says nothing about how the universe was created. As such, there is no beginning to the Big Bang, since it is a theory that merely describes the universe’s history.”

He goes on to explain that in the Big Bang model (which he wrongly refers to as a theory, as there’s no observational evidence to support it), the entire universe was once packed so tightly together that normal physics wouldn’t have worked. Therefore “our current knowledge of the laws of physics tell us little to nothing about what happens at that scale. For now, the beginning of the universe is still unknown.”

This scientist needs to read the Bible—the beginning of the universe is not unknown! It’s not a mystery. The eyewitness Creator has told us how the universe began:

In the beginning, God created the heavens and the earth (Genesis 1:1).

As I said to Bill Nye, “The Science Guy,” when I debated him in 2014, it’s not a mystery where matter came from. I added: “we have a book that tells us” where matter and the universe came from.

Now, many Christians who compromise God’s Word in Genesis argue that God used the Big Bang to create. They’ll even say that the Big Bang proves there was a beginning, which agrees with the Bible. But this is a very poor argument. First of all, the Big Bang model contradicts the Bible in several ways (e.g., the order of events in Genesis); secondly, it’s nothing more than a secular origins story based on naturalism. In other words, the idea was developed for man’s atheistic belief to try to explain the universe without the need for a Creator.

When Christians appeal to the Big Bang, all they are doing is sticking God into a pagan origins story. Besides, the Big Bang idea has the stars existing before the sun and earth (which began as a hot molten blob, adherents say). But the Bible makes it clear that God created the earth first, that it was covered with water (not a hot, molten blob), and that the sun and stars were created after the earth.

The Big Bang doesn’t actually explain how the universe began. According to this scientist, that’s still an “unknown.” A naturalistic origin for the universe is an idea that must be accepted by faith. Instead of placing their faith in the Creator God, these scientists put their faith in an unknown. I urge them to look into the Bible and get answers to their questions about the history of the universe—and to personally encounter their Creator and Savior, the Lord Jesus Christ, there.

You can learn more about the problems with the Big Bang model in this Answers magazine article by astrophysicist Dr. Jason Lisle: “The Big Bang.”

Watch the entire episode of Answers News for November 12, 2018.