The public display of cross-shaped beams at the 9/11 Memorial Museum has stirred demands for their removal. 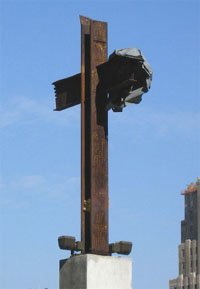 The public display of cross-shaped beams at the 9/11 Memorial Museum has stirred demands for their removal.

The legal battle over the cross at Ground Zero in New York City continues.* The controversy started when the 9/11 Memorial Museum included a famous cross consisting of two intersecting steel beams found in the rubble after the Twin Towers collapsed on September 11, 2001. American Atheists originally sued, claiming in part that viewing of a public cross can cause headaches, indigestion, and mental pain. Now the American Center for Law and Justice has filed an amicus brief encouraging the federal appeals court to uphold a lower-court decision to dismiss the atheists’ suit.

The brief accurately states that past US Supreme Court decisions have acknowledged that “history does not establish a religion.” Furthermore, “Offended observers . . . cannot be permitted to rewrite history or constitutional precedent.”