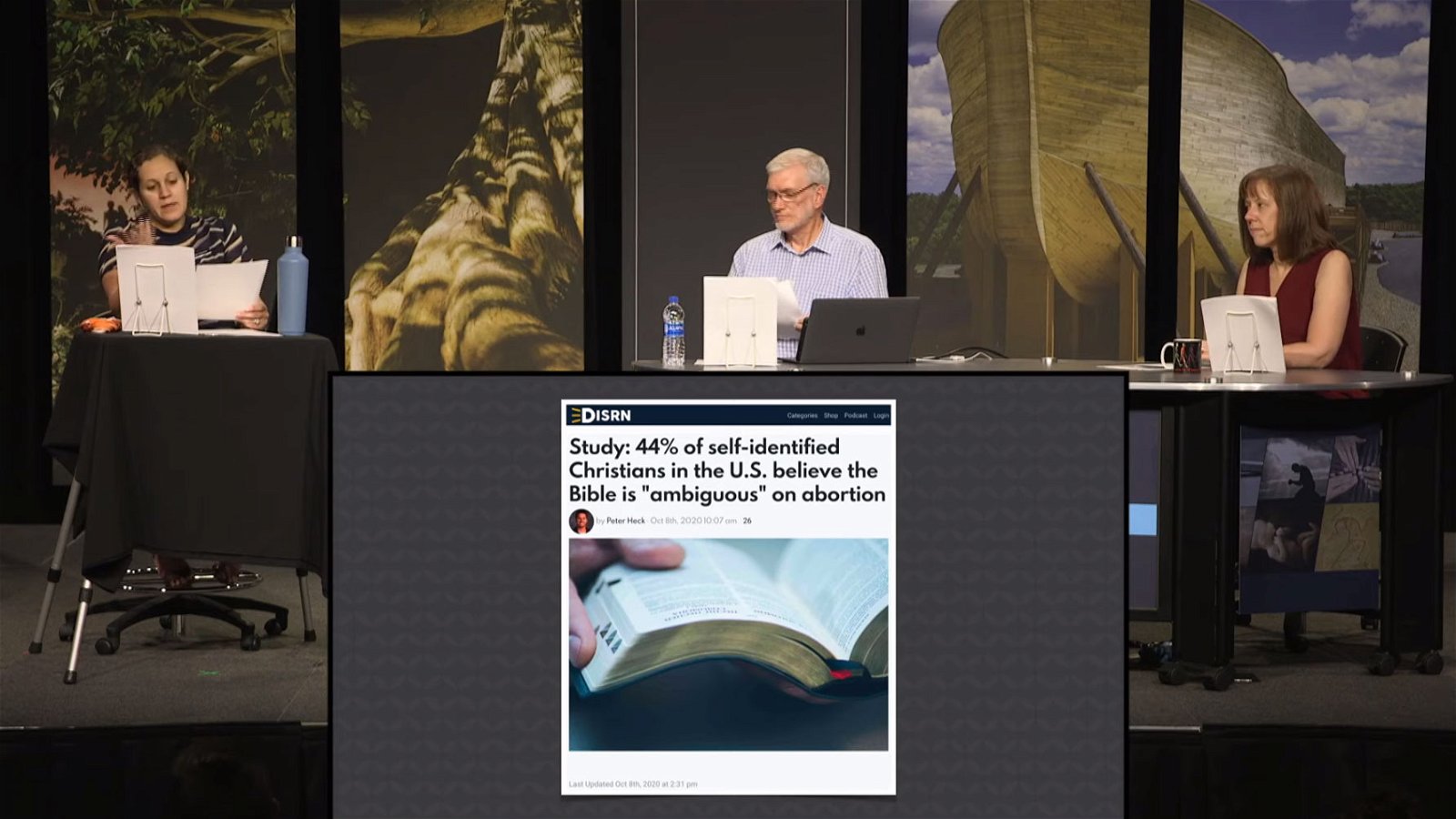 Abortion is the killing of an unborn child in his or her mother’s womb. There’s really no other honest way of describing it. Actually, there is another word for it—murder. So-called “pro-choice” activists (really, “pro-murder” activists) use terms like “reproductive freedom,” “health care,” or “a woman’s right to choose” to try and make abortion sound like anything but what it is—the intentional murder of an unborn child.

Now, is the Bible ambiguous on something as heinous as murdering a helpless child? Well, apparently 44% of self-identified Christians say “yes.”

According to the “American Worldview Inventory 2020” survey from Arizona Christian University, “44% of self-identified Christians said they think the Bible is ‘ambiguous in its teaching about abortion.’” And 34% said, “abortion is morally acceptable if it spares the mother from financial or emotional discomfort or hardship.”

It is a massive failure on the part of parents and the church that nearly half of professing Christians believe the Bible is wishy-washy or unclear on the sanctity of every human life, including the unborn. Scripture is not ambiguous—it is abundantly clear (see below). People just either don’t know their Bibles, have never been taught to use the Bible as their starting point, or are suppressing the truth that is abundant from God’s Word and science to go along with the culture of death and its message that women can only be free if they’re legally permitted to murder their own children. Really, abortion is nothing but child sacrifice under another name.

Now, in the paragraphs that follow, I point to biblical passages that clearly demonstrate how God views the lives of the unborn—as fully human, made in the image of God (Genesis 1:27). And, it follows, if the unborn are fully human, the prohibitions regarding murdering them fully apply! But I first want to deal with the belief that 34% of professing believers espouse: that the morality around abortion is relative, depending on the circumstance, and that it is acceptable if it “spares the mother from financial or emotional discomfort or hardship.”

Here is such a scenario. A single mother is pregnant with her third child. She’s already struggling to make ends meet for her six-year-old and three-year-old. Their many needs are emotionally draining. After thinking for a few days about how much extra hardship this new baby will add to her life, she makes an appointment at a local clinic and has the unborn child killed by taking a few pills (a chemical abortion). Apparently 34% of Christians think this would be okay.

Now, imagine the same young mother doesn’t have an abortion and gives birth to the baby. After a few months, she’s overwhelmed with the increased demands on her time, finances, and emotions (not to mention her sleep!). So, after thinking for a few days about how much extra hardship this new baby is, she puts the baby to bed and holds a pillow over the baby’s face until her child passes away. Would 34% of Christians say that her actions were morally acceptable? No, they almost certainly wouldn’t.

But why? What’s the difference? Why does the location of the baby (in the womb vs. in a crib) or the level of development (and life is just a continuum of the developmental process) determine the worth or value of this child’s life?

Why does the location of the baby or the level of development determine the worth or value of this child’s life?

Abortion is no different from this hypothetical mother who murdered her infant. Abortion ends the life of a child. It is murder and it is wrong. Period. Full stop.

The circumstances surrounding the family and conception or life of a child can be immensely complicated (and that’s one reason the body of Christ exists—to help those in need with practical help and gospel hope!), but the issue of abortion isn’t. It is wrong and a sin against the Creator who fearfully and wonderfully knits us together in his very image (Psalm 139:13–14).

The belief that these Christians are buying into is nothing more than the secular idea that morality changes depending on the situation (no, it doesn’t—there are moral absolutes that come from God) and that we’re (or the unborn) just animals or some kind of sub-human clump of cells (but science clearly shows that’s not the case—we’re 100% human from the moment of fertilization). But we don’t determine morality or have the authority to justify our actions based on arbitrary human standards. God creates life and he has spoken to us authoritatively in his Word and said, “you shall not murder” (Exodus 20:13).

Parents and pastors—don’t just assume your children, grandchildren, or congregations understand that abortion is a vile evil, that it is sin, and that God’s Word speaks clearly on this issue. Many churches have just assumed those filling the pews are pro-life—but studies like this one we’ve cited show over and over that is not the case! The church is thinking very much like the world, with little knowledge of God’s Word or understanding how to start with God’s Word and think biblically about these vital social issues.

Parents and pastors—don’t just assume your children, grandchildren, or congregations understand that abortion is a vile evil, that it is sin, and that God’s Word speaks clearly on this issue.

We must teach foundationally beginning with Genesis—showing that God’s Word is the starting point for our thinking in every area. We must teach Genesis as history, showing that all of our major Christian doctrines—including those regarding the sanctity of human life—are grounded in the history of Genesis. Humans alone are made in the image of God (Genesis 1:27). We are not animals. We are image bearers of the Creator, and every single human life has value and dignity because we are made in God’s image. We are fearfully and wonderfully knit together by God (Psalm 139:13) and known by him before we are even conceived (Jeremiah 1:5). Scripture consistently gives the lives of unborn humans the same value as those who have been born (e.g., Exodus 21:22–25). Killing an unborn child is murder, just as much as killing a toddler, a teenager, or an adult is. And God’s Word is clear on murder:

Whoever sheds the blood of man, by man shall his blood be shed, for God made man in his own image. (Genesis 9:6)

There are six things that the Lord hates, seven that are an abomination to him: haughty eyes, a lying tongue, and hands that shed innocent blood, a heart that devises wicked plans, feet that make haste to run to evil, a false witness who breathes out lies, and one who sows discord among brothers. (Proverbs 6:16–19; emphasis added)

Fearfully and Wonderfully Made

The biblical (and scientific) truth that speaks so powerfully against abortion is boldly presented in our brand-new Fearfully and Wonderfully Made exhibit here at the Creation Museum, west of the Cincinnati Airport. It’s a celebration of life that displays how God values the lives of the unborn and how they are fearfully and wonderfully made in his image.

Pastors and parents: bring your young people to see this exhibit! Take time to go through it slowly and thoughtfully. Discuss the biblical and scientific truths with them. Study the sign that talks about common arguments for abortion. (You can also find powerful answers to common pro-abortion arguments in Life is Best, available from our online store.)

We need generations who love God and his Word and know what it teaches. And who understand how to think foundationally, using the Bible (from the very first verse) as the starting point for their thinking, without compromise with secular ideas.

But don’t stop with emphasizing the sanctity of every single human life, pointing out the evils of abortion, and teaching your family or congregation to think foundationally on this issue. Show them how the gospel applies to abortion!

The gospel is hope, peace, forgiveness, and healing for those who have chosen to have an abortion, actively participated in the abortion process, convinced others to have one, or stood by and allowed it to happen. God promises that if we repent and trust alone in Christ for salvation, he removes our sins and remembers them no more.

The gospel is hope, peace, forgiveness, and healing for those who have chosen to have an abortion.

If we confess our sins, he is faithful and just to forgive us our sins and to cleanse us from all unrighteousness. (1 John 1:9)

In him we have redemption through his blood, the forgiveness of our trespasses, according to the riches of his grace. (Ephesians 1:7)

As far as the east is from the west, so far does he remove our transgressions from us. (Psalm 103:12)

The gospel is the hope for a culture of death. The bad news—that we’re all sinners with wicked hearts—explains why such an evil as abortion exists and is even promoted and defended. It explains why people selfishly chose this option (often even believing they are doing the selfless thing for their child by sparing the child what they think will be a life of pain or poverty). You see, the good news is the hope we need! It’s the gospel that changes hearts and lives for now and eternity. It’s the gospel that sets people free to love God and others, including unborn children. It’s the gospel that compels us to speak boldly, love mothers, fathers, and babies, and provide practical help and hope to those in need.

So boldly speak and champion biblical truth and the gospel of Jesus Christ to all who will have ears to hear—including those in your homes and churches.

I discussed this item yesterday on Answers News with cohosts Dr. Georgia Purdom and Dr. Gabriella Haynes. Answers News is our weekly news program conducted here at the Creation Museum and broadcast on my Facebook page and the Answers in Genesis Facebook page. We also covered the following topics:

Watch the entire episode of Answers News for October 12, 2020.