Is Genesis Myth or Reality?

by Kevin May on June 1, 1995
Share:
Email Using:
Gmail Yahoo! Outlook Other

That was because of the smoke, wasn't it!' Tomas, my translation helper, gave me his explanation of why Cain's sacrifice displeased God. We were translating the first few chapters of Genesis into his own language, Nimboran.

It soon became clear as the translation proceeded that the people had absorbed some strange ideas, having been taught in what was to them a foreign language.

THE ORIGIN OF SIN

I was working with Tomas, one of the head man's sons, as the translation got under way. We translated the story of creation in Genesis 1, then began on chapter 2. Verse 8 tells of the Lord's planting a garden in Eden, where he put the man he had made. Then verse 9 says that God caused every kind of tree to grow there that is pleasing to see and good for food.

Up to that point translation had gone smoothly, but now Tomas stopped. He added, 'And the two evil trees!'

Puzzled, I asked, 'What do you mean, "evil trees"? We have just translated that God made everything very good.'

'Oh', said Tomas, 'they were the trees that tricked Adam into sinning'.

'But God saw that everything He made was very good.'

'No', Tomas insisted, 'there were evil trees there too'.

As we talked about this it came out that the people had always believed that Adam had been tricked into sinning. To the Nimboran people no one is evil, and bad things like sickness and accidents only happen to people when they offend one of the nature-spirits that live all around them. Unless someone deliberately offends the spirits, nothing bad will happen to him except by unwittingly doing something wrong.

In Adam's case it wasn't his fault that led to the broken relationship with God, but it was the fault of the tree. Adam had to suffer the consequences of accidentally offending God.

We continued translating, and soon we came to verses 16 and 17, which tell how God gave specific instructions to Adam concerning the trees in the garden. I explained that Adam knew full well what God's command was. Yet he took the fruit from the tree of the knowledge of good and evil, knowing full well where it came from, and ate it deliberately.

'Well!' said Tomas. 'We never heard that before. And that means that we do the same thing as Adam. We know what our fathers tell us to do, but we disobey and they get angry with us. We do just what Adam did! So God was right to send Adam out from the garden.'

A few days later Tomas and I reached chapter 4, the story of Cain and Abel. We translated down as far as verse 5, which said that God had no regard for Cain and his offering of vegetables. Tomas looked up and said confidently, 'That was because of the smoke, wasn't it!'

I thought immediately of illustrations seen in so many picture Bibles. I looked up one in my son's Bible, and there, sure enough, was a picture of the smoke from Abel's altar going up straight, and from Cain's it was crooked. To us this is just artist's licence, but to people who did not understand clearly what the text meant it was taken to be reality.

Again it was clear that the Nimboran people thought that was why God was angry. It was a chance event that went against Cain. Maybe a gust of wind had caught the smoke, and Cain was an innocent victim of chance.

I had more explaining to do. Reading again what we had translated, I showed that God must have already told Adam and Eve about animal sacrifices. After all, He provided animal skins to clothe them (Genesis 3:21), and the skins could only have been obtained through the death of the animals.

Cain and Abel both must have known God's instruction about how to perform sacrifices. They were to take a lamb from the flock and sacrifice it to God. Abel had done so, and God was pleased with his action. However, Cain was unwilling to obey. 'My vegetables from my garden are good to sacrifice to God!' he said.*

'Now', I said, 'if Cain had wanted to obey God's instructions, he would have taken his vegetables to his brother Abel and given them to him. He would have asked him for a lamb in exchange'. That is precisely what Nimboran people do when they want something from another person — first give a gift, and then ask for what they want.

'But instead of doing that, Cain said, "No, my vegetables are good enough. I will offer them to God". That was why God was displeased, because Cain disobeyed God.'

'Why', Tomas exclaimed, 'we do just the same to our elders. We are just like Cain, and when our elders get cross with us, we get angry'.

Continuing the translation, we wrote how Cain was angry with Abel and ended up killing him. God banished Cain from the land of his father because of the murder.

Tomas was excited. 'That is just what we would do too! We would be likely to kill the person with whom we were angry, and then we would have to run far away from our father's land and live separately, so that the avenger of blood couldn't kill us in return. What happened to Cain is just right.'

Tomas could see clearly that the story in Genesis is the truth, because it shows Adam, Eve, Cain, and Abel doing what people still do today. This is in tremendous contrast to their own mythology, in which stories are told of people doing impossible feats using magic. What the Bible says fits properly with what real people do.

How people today are misled. So many think that the stories in Genesis, and other parts of the Bible, are myths — stories that are not literally true, but are put in to teach some spiritual lesson. The Nimboran people are very perceptive of human nature, and they can see that the Bible is talking about real people and real events. We in the Western world, bemused by all our science and achievement in technology, have lost some of that sensitivity to what is true, and we no longer recognize it.

It is as God says, '… I will destroy the wisdom of the wise … has not God made foolish the wisdom of this world?' (1 Corinthians 1:19-20). In our belief in our own wisdom we can so easily overlook truth which is obvious to others. Instead, let us rejoice in the fact that God's Word is true, and worship Him who gave it to us. 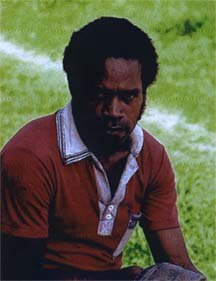 The Nimboran people, numbering some 3,500, live in the valley of the Grimi and Nembu rivers in the north-east of Irian Jaya. Dutch evangelists worked in the area beginning in 1925 until the late 1950s, and churches formed in nearly every one of the 25 Nimboran villages as a result of their work.

As the Dutch used the Malay trade language, rather than Nimboran, their teaching was always done through an interpreter wherever the people did not understand Malay — and that was most of the time.

Kevin and Wendy May went to live among the Nimboran people in 1978, to learn their language and begin translating the Scriptures into Nimboran. It was a long process getting to know the language and the people, and it was several years before they could begin to translate. In 1985, having translated some selections from the life of Christ, they felt it best to begin work on the early chapters of Genesis. The people were often asking where humans came from, and how they themselves were related to white people.

* Not all commentators agree with this as the reason for God's displeasure. The Hebrew word minhah, used to describe the offerings of both Cain and Abel, means a gift of homage or allegiance, which could be either an animal or cereal offering. Therefore some say that it was only the heart attitude of the offerers that God regarded, or that it was simply God's sovereign choice not based on either the gift or the giver. Other commentators propose the reason which I stated.

However that may be, it is clear that Abel brought the choicest offering he could, a firstling of the flock and its fat portions. Cain did not. Hebrews 11:4 calls Abel's 'a better sacrifice than Cain's', and 1 John 3:12 says that Cain was of the evil one. Clearly there was a problem with Cain's attitude towards God, which my reply to Tomas brings out when Cain said, 'My vegetables are good enough!' His disrespectful and irreverent approach to God is obvious, and Tomas understood that.