With all the controversy over the possibility of intelligent design being taught along with evolution in public schools (e.g., Kansas, Ohio, Pennsylvania, Georgia, etc.), this topic has become fodder for editorial cartoonists who are aiming their brushes and pens in our direction with greater frequency. As a cartoonist myself, who is continually scanning the newspapers and the web for editorial cartoons, I have noticed that most of the cartoons that are pro-evolution tend to make Christians look less than intelligent (e.g., by often portraying them as “cavemen” or some ape-like ancestor).

Recently, however, a collection of cartoons—including an anti-creationist one—was given the highest of awards that an editorial cartoonist can receive. And surprisingly, I actually agree with the message contained in the evolution/creation cartoon in the selection . . . well, sort of!

On April 17, the Pulitzer prize-winning USA journalists for 2006 were announced. This year’s winner in the best editorial cartoonist category is Mike Luckovich, who draws for the Atlanta Journal-Constitution in Georgia. Luckovich is definitely one of the best editorial cartoonists in the profession; in fact, this is his second Pulitzer (the first was awarded in 1995). Even though I often disagree with his point of view, I have to admit I’ve been a fan of his work for years. He is a very clever and gifted communicator.

The origins cartoon in question is just one piece in Mike’s winning collection of twenty cartoons, and it depicts an Icthus fish (a well-known symbol of the Christian faith) that has swallowed a science book. 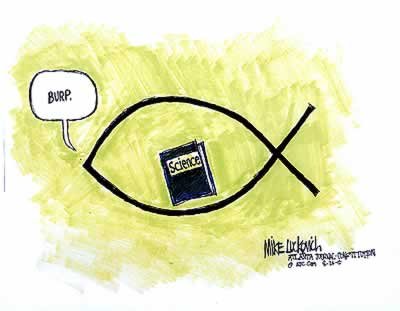 This is a “what’s-WRONG-with-this picture?” type of image. The two contrasting elements in this case are “science” and Christianity. From the secular world’s point of view, that is like mixing oil and water—it just doesn’t work.

My initial reaction when seeing this cartoon was, “Here we go again. Another shot at creationists, and this time it’s awarded a Pulitzer!” But, as I’ve thought about this cartoon, I’ve changed my mind. Now I’m actually encouraged by it.

First, this cartoon was one of twenty, selected from an entire year’s worth of work and submitted for its strength of impact and relevance to the events of the past year. Well, in one sense, I say “Praise the Lord” for the impact that creationists have been making in this country (and around the world)! Sure, it would be nice if the recognition was of a positive nature, but it’s not a terrible thing if those who disagree with our message and growing influence deem us worthy of notice. In fact, to go unnoticed would be far worse! We’d wonder about our relevance.

The public school system and secular media have conditioned most people to think that science and biblical Christianity are at odds with each other.

Second, if you look at this cartoon from a biblical point of view, the cartoon is “right on”! You see, since God is the Creator of the universe, He should be (and is) the God of science and fields such as biology, geology, astronomy and anthropology. Why does this cartoon provoke a negative response, which is the cartoonist’s intent? Because the public school system and secular media have conditioned most people to think that science and biblical Christianity are at odds with each other.

One thing that should be clarified here is that real science can be (and is) used by both Christians and non-Christians. Using God’s Word to understand God’s universe, however, brings a great advantage to the scientist seeking to gain knowledge in a particular field of science. Many great scientists of the past and present have used God’s Word to benefit the world with great scientific discoveries.

On the other hand, starting with a way of thinking that denies the existence of God (or distorts God’s infinite qualities) and then using science has led to many wrong conclusions (see, for example, Get Answers: Embryonic Recapitulation and “Vestigial” Organs) and harmful philosophies such as evolutionism.

The Luckovich “Icthus” fish cartoon reminds me of the “We’re taking them back” series of illustrations I produced for AiG, which tells people about our ministry and the future Creation Museum near Cincinnati, Ohio. We want more and more people to know that the Bible and science do go together. The secular world has claimed science for itself and convinced far too many people that the Bible and science don’t mix. We want to take back science, dinosaurs and the real history of the universe for the glory of the One who created it all in the first place.

Another encouragement is that while there are many cartoonists who are antagonistic to Christianity, there are Christians who produce cartoons who do give credit to God as Creator, and even challenge false philosophies such as evolution. Wayne Stayskal, Chuck Asay and Gary Varvel are just a few of the editorial cartoonists in the USA drawing cartoons that go against the majority evolution bias. In addition, Johnny Hart, creator of the famous strip B.C., often has biblical creation messages in his comics. Each of these men has been an inspiration to me in the excellent, thought-provoking cartoons they produce and the strong stand they have taken (sometimes at the cost of having editors pulling their cartoons from running in various newspapers). Not all cartoons or cartoonists are awarded Pulitzers, but some are bearing fruit for the kingdom here on earth and earning treasures in Heaven.