Critics have put forward creative but erroneous conjectures about the upcoming debate between Bill Nye and Ken Ham. 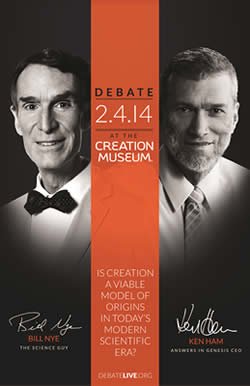 We recently received the following email from a critic about the Bill Nye vs. Ken Ham debate at the Creation Museum on February 4:

[Ken Ham] sells tickets only to those who believe in one side of the debate and refuses admission to others, or promise to stream an event and then cancel it out of fear he will be shown up in the debate. You should be ashamed of yourselves, but I've learned that fundamentalists really have very little shame when it comes to covering up embarrassments.

Selling Tickets to the Debate

It appears this individual believes that the online software used for ordering the Bill Nye vs. Ken Ham debate tickets has the capacity to somehow sort out the atheists from the creationists. 1 This claim that the Creation Museum hoarded tickets for use only by creationists has been made by quite a few people, so Ken Ham decided to comment on this conspiracy theory in a lead article on the AiG website.

Furthermore, how do these critics explain the online comments posted by Nye supporters who declared that they went to the museum’s ticket-ordering page and successfully managed to obtain tickets?

This person should also know that we have very much wanted live streaming of the debate so that as many people as possible can watch. Previously on our website, we announced the following:

Because of the huge media interest in the Bill Nye/Ken Ham debate at the Creation Museum on February 4 . . . the live streaming option is being put on hold as we are looking into other exciting opportunities for people to watch the debate live. Ultimately, these other possible options would allow even more people to view this historic debate. . . .

With the debate selling out, we are committed to the very best ways by which as many people as possible can also watch the debate live.

The live-streaming option was not put on hold because of a “fear Ham will be shown up in the debate” and that he might be “embarrassed.” It was done because of discussions Mr. Nye’s people and AiG were having at the time with TV networks about carrying the debate live. It was possible that a network wanted exclusivity to carry the live debate and would require that live streaming not be carried by a competitor. Following these discussions, we announced the free live stream on January 16.

Among other conspiracy ideas on the Internet is that our final DVD of the debate will be heavily edited in AiG’s favor. For example, the charge is that AiG will edit Mr. Nye out of context. However, it is expressly stated in our contract with Mr. Nye that the final video of the debate will not be edited, except for obvious things like long pauses (e.g., as one speaker goes to the lectern as the other sits down).

Sadly, these accusations are typical of many evolutionists. They often make wholesale conjectures out of virtually nothing, and what facts they do possess are interpreted in a way that twists things to suit their own anti-Bible purposes. Ironically, as we examined the email address of the person who made these false claims, it had the word truth in it.

The two-and-a-half-hour debate will be live streamed (at no cost) on February 4 at 7 PM (ET) at debatelive.org.