Bill Nye vs. Ken Ham Debate at the Creation Museum

TV’s famed “Bill Nye the Science Guy” will argue the case against creation and for evolution as he faces the founder and president of the Creation Museum, Ken Ham, on February 4, 2014, in the museum’s 900-seat Legacy Hall. The museum, which has drawn two million guests in six years (including 20,000 visitors at its recent Christmas Town programs), is located in Petersburg, Kentucky (near the Cincinnati Airport).

The agreed-upon topic for the 7 PM debate is “Is creation a viable model of origins in today’s modern scientific era?” 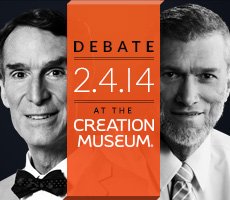 “A debate with Mr. Nye, nationally known for his children’s TV program and for promoting evolution, will be one of our major events in 2014 to highlight how children and teens are being influenced by evolutionary thinking," declared Ham. “This year, our AiG theme is ‘Standing Our Ground, Rescuing Our Kids.’ Having the opportunity to hold a cordial but spirited debate with such a well-known personality who is admired by so many young people will help bring the creation/evolution issue to the attention of many more people, including youngsters.”

Ham added, “I hope to show Mr. Nye and our debate audience that observational science confirms the scientific accuracy of the Genesis account of origins, not evolution.”

Nye is the former host of the popular Bill Nye the Science Guy PBS-TV program for children, the current executive director of the Planetary Society, and a frequent guest on TV interview programs.

Ham also noted, “If his travel schedule permits that day, Mr. Nye will be my guest at the museum. I would personally show him through our museum before the debate. I would also like him to meet our several full-time staff members who hold earned doctorates in science.”

AiG is willing to participate in public debates with serious evolutionists with credentials. Even though some mocking, strident evolutionists have challenged AiG to public debates, their requests are not considered. As a serious advocate for his beliefs, Nye’s opinions carry weight in society.

Ham, who debated at Harvard in the 1990s, has pointed out that evolution/creation debates featuring serious debaters have sadly become rare.

Tickets are $25 each and will be available for purchase through the debate event page starting Monday, January 6.

Editor’s note: This article was adapted and distributed as a news release today to the national media.