Yosemite National Park is the most accessible place in the world to see the Ice Age´s power to reshape the earth´s surface, including hanging waterfalls, sheer cliffs, and granite domes.

“Sweetheart, this place is beautiful! But I can hardly imagine this whole valley being filled with ice—a half-mile deep. California certainly isn´t the same!”

“Yeah, and the ranger said the main glacier appeared a million years ago. But the creationist guidebook explains that the global Flood, only a few thousand years ago, is the only way to create the conditions necessary for an Ice Age.”

Yosemite National Park is the most accessible place in the world to see the Ice Age´s power to reshape the earth´s surface, including hanging waterfalls, sheer cliffs, and granite domes.

Half Dome is the most well-known rock formation at the park. As the moving glacier cut away the rock underneath the granite dome, half of the dome slid away.

Nearby is Yosemite Falls. Dropping 2,425 feet (739 m), it´s the highest waterfall in North America. What force could cut the sharp angles necessary to make such a deep drop? Powerful, fast-moving ice—not a river—cut this U-shaped valley.

The Ice Age was temporary, fueled by the warm oceans that had been heated during the Flood. As the ice melted away, it left behind random boulders, called erratics, which you can find on various trails. Scrape marks, called striations, were gouged into solid granite by rocks in the bottom of the glacier.

If you want to see the forces unleashed during the Ice Age in the centuries after the Flood, then Yosemite is the place to go. It´s breathtaking, too.

Recommended by Dr. Larry Vardiman, chairman of the Department of Astro-Geophysics at the Institute for Creation Research.

Imagine a glacier that once filled this valley, seven miles long and one mile across. That’s what happened after the Flood, as the earth cooled and glaciers arose on mountains around the world—including this mountain range in California.

As the glaciers grew, they surged downhill, shoveling out the topsoil and exposing the underlying granite. They also widened the valleys, leaving sharp cliffs on each side. After the glaciers melted, new creeks formed. Wherever the creeks reached the sharp edge of cliff walls, they plummeted into the air in beautiful “hanging” waterfalls, like the famous Bridal Veil Falls. 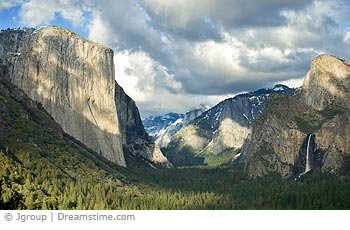 If you drive up the mountain on the south side of Yosemite Valley, you can see the power of the Ice Age below you. You’ll see two deep valleys through which glaciers once flowed, and between them is Half Dome. The ice couldn’t knock down the granite dome, but it did gouge out enough material at the base to cause half the dome to collapse. 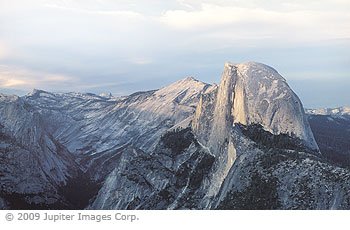 This is one of the best places to see strange boulders—some balanced in precarious positions—left behind by melting glaciers at the end of the Ice Age. Glaciers would pluck up large boulders and move them great distances. But be careful—these boulders (known as erratics) could fall on you! 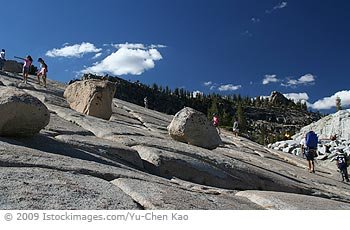