This unique museum boasts over 14,000 mammal specimens, including the world´s largest elephant skeleton in the world, the Imperial mammoth which towers 14 feet (4 m).

Do you sometimes wonder about the sheer diversity of animals that arose quickly after the Flood? Perhaps you´ve seen weird creatures like sloths or others at various natural history museums. While Adam didn´t see all this variety among the original animal kinds in the Garden, you can see a lot of variety among post-Flood animals by visiting the University of Nebraska State Museum. The collection boasts over 14,000 mammal specimens, many of which are from the fossil-rich area of Nebraska.

The University of Nebraska State Museum has a hall of elephants that will make your jaw drop. Other rooms are filled with an amazing array of post-Flood mammal fossils, including rhinos, horses, cats, weird created kinds that are now extinct, and even a giant camel (named appropriately Gigantocamelus). These many species represent only a handful of created kinds that left the Ark after the Flood.

A trip to this unique museum will provide the opportunity to talk to your family about the amazing variety that God programmed into His created kinds, as seen in some stunning fossils and displays and to discuss how the Bible provides the correct starting point regarding the origin and variety of species.

Have you ever imagined an elephant with flattened tusks for scooping? You'll see one here (Ambelodon). You'll also see the world's largest elephant skeleton in the world, the Imperial mammoth which towers 14 feet (4 m). While you will see many different species of elephants in this museum, they probably all came from the elephant kind several thousand years ago. 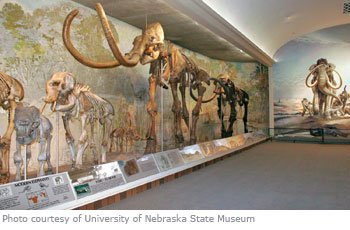 Have you ever heard of a barrel-shaped, aquatic rhino? You'll find one of those (Teleoceras) at this museum along with unique species of rhinos. Recent studies suggest that after the Flood, speciation happened so fast that the environment couldn't support all the different species produced. As a result, many of the species produced went extinct. North America used to be home to mammoths, rhinos, camels, and horses after the Flood, as seen in the museum's exhibits, but many of these species are known now only from fossils.

If you want to see some amazing fossils of rhinos and horses, you might consider taking a trip (3 hours north) to the Ashfall Fossil Beds where you can get a sense of both the variety of species that used to roam North America and the violence with which many of them died from a post-Flood volcanic explosion. The fossils are being excavated and left in the ground but are protected by a Rhino Barn. 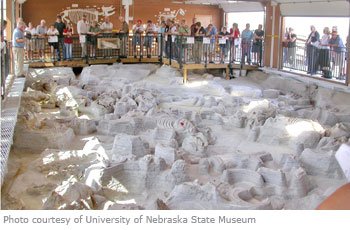 With some preparation beforehand, you may decide to use the time in the Explore Evolution Exhibit to discuss with your family the evolutionary storyline behind the species, including what Darwin believed about species, what he observed in his travels to the Galápagos Islands 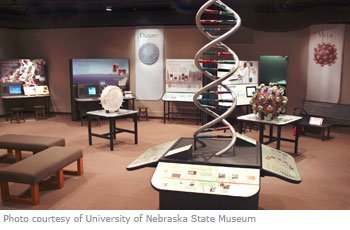