The Fossils Hall in the Smithsonian National Museum of Natural History, Washington, D.C., is world-class, including many real dinosaur fossils—not copies—on display.

“Mom, this sign says that T. rex ruled the earth 65 million years ago. How do they know that?”

“That´s a good question. Their dates are based on lots of assumptions, not observed facts. For one, scientists assume that each fossil layer was laid down slowly, separated by millions of years. But what does the Bible say?”

“It says God created everything in one week, right?”

“That´s right! And since land animals and humans were both created on Day Six, we know that dinosaurs and people lived at the same time, not very long ago.”

“Then how´d the dinosaurs die?”

Conversations like this—at least the questions—are common at every natural history museum. With a little preparation, your family can closely examine the signs and learn how to distinguish fact from interpretation. Then discuss how the Bible provides a better explanation for the facts.

The Fossils Hall in the Smithsonian National Museum of Natural History, Washington, D.C., is a great place to try this. A series of rooms take guests through the supposed evolutionary “history of life,” from the first bacteria to “ancient seas,” dinosaurs, and modern mammals. The collection itself is world-class, including 26 real dinosaur fossils—not copies—on display.

As you take your family through the rooms, including the massive two-story dinosaur gallery, you can explain that we have the same facts—the physical fossils—just different interpretations. Even many of the paintings, which are based on a careful study of the fossils, may be fairly accurate. The problem is with the words on the signs, which add millions of years.

Knowing the Bible´s true account of history, Christians have the truth, not manmade stories. In six days, God made every kind of creature, including dinosaurs. When the global Flood later buried that world, we would expect the rising water to destroy different environments in a series: first the sea creatures, then the sandy coasts, and finally various inland environments. So a large part of the fossil record may be a snapshot of creatures that once filled various environments before the Flood.

The facts—those things in the present we can see and hold—are on display at Smithsonian. That includes the fossil of T. rex. But it´s up to you to help your family separate the facts from interpretations. The process of discovery will afford a rewarding, faith-affirming experience.

Recommended by Dr. Marcus Ross, assistant professor of geology and assistant director of the Center for Creation Studies at Liberty University.

Made in a Rat’s Image?

Visitors to the Hall of Mammals are greeted with a sign: "Welcome to the Mammal Family Reunion! Come meet your relatives." At center stage is a statue of a rodent-like creature called "Morgie" (short for Morganucodon), purported to be the oldest known mammal. Such signs provide a perfect opportunity for families to study the difference between facts and interpretations, and to discuss why the Bible provides a much more reliable explanation for the facts. 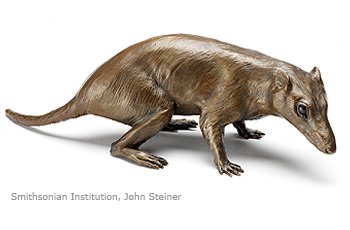 Every year, 8 million people flock to the Smithsonian Institute’s Museum of Natural History to gawk at their many exhibits, from the Hope Diamond to a moon rock you can actually touch. While there, don’t miss the Fossil Hall. It’s a great opportunity for children to examine firsthand the evolutionary story.

With a little bit of coaching, children can recognize that the debate is not really about the facts in front of their eyes (the fossils) but the interpretations based on beliefs about the past. As your family walks from room to room, seeing the “ancient seas,” the reptiles on the beaches, and the inland dinosaurs, tell them about the exotic environments that God created and later destroyed in the global Flood.

Be sure to take a few creation-based science books or DVDs along in the car. You’ll want to refer to them in the hours after your visit! 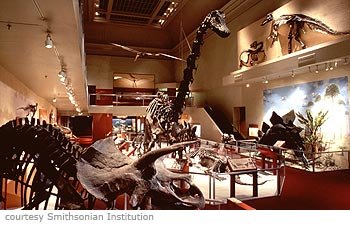