Denver Museum of Science and Nature

A trip to the Denver Museum of Science and Nature can be a great time to teach your family or other Christians how to distinguish facts from interpretations. You´ll get to see some of the best modern displays of dinosaurs and other animals.

Should Christians be afraid of natural history museums that promote evolution so heavily in their exhibits? Not when they are equipped with the truth about the earth´s history and have a discerning eye. A trip to museums, like the Denver Museum of Science and Nature, can be a great time to teach your family or other Christians how to distinguish facts from interpretations. You´ll also get to see some of the best modern displays of dinosaurs and other animals here as well.

Authentic fossil dinosaur bones of a Stegosaurus, Allosaurus, Diplodocus, and an impressive cast of a T. rex stand ready to greet guests entering the Prehistoric Journey gallery. Here, you will see dioramas of ancient environments that have been reconstructed to match the standard evolutionary timeframe of millions of years. Use this time to discuss how the debate on the age of the earth and the fossil record is not so much about the facts or evidence but more about the interpretations, based on beliefs about the past. As you study the dioramas of the supposed timeframes, talk to your family about the exotic environments that God created and later destroyed in the worldwide Flood. Refer to the charts on pp. 45-45 and 49 in the Answers Planet Earth issue for the biblical alternative to the evolutionary-based interpretation of the fossil record. The October–December 2013 and the October–December 2014 issues would also be helpful.

There´s no doubt that children will be full of questions as they view the astounding displays of dinosaurs and other creatures. This museum gives parents ample opportunities to explain to their children why the Bible provides a better explanation for the facts about our history. And they will be better equipped to discern facts from beliefs as they apply what they learn here to everyday life.

The Prehistoric Journey is filled with stunning dinosaur bones, realistic sound effects, and interesting dioramas that place these creatures in ancient environments. Besides each diorama you will find a case with a photograph of what the site might look like today with the fossils being dug out from the various sites. Explain to your children that fossils don’t come with tags on them, telling us how old they are. The facts about the fossils must be interpreted based on a person’s starting point—the Bible’s truth or man’s fallible reasoning and dating methods. 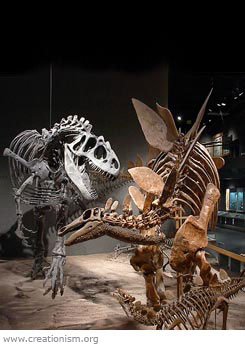 Fishing for the Truth

As you come to the end of the dinosaur exhibit in the Prehistoric Journey gallery, be sure not to miss the opportunity to discuss what might have happened to the dinosaurs as you view a large replica of a rock exposure from which a four-inch-long sample of layered rock that records evidence of a large comet or meteor strike. It contains bits of quartz ejected from the impact. According to many evolutionists, this impact was responsible for the mass extinction of dinosaurs 65 million years ago. Some creationists believe that this impact occurred during the middle or late stages of Noah’s Flood.