One of the world´s most spectacular caves is Carlsbad Caverns in southeastern New Mexico, USA.

One of the world´s most spectacular caves is Carlsbad Caverns in southeastern New Mexico, USA. Known for its large rooms and bat colonies, it provides an excellent example of the limestone caves that we find worldwide.

Secular geologists believe that it took a long, long time for such caverns to form. The formation of limestone and then eating away the limestone is very slow in the present. To carve out caves today, rainwater passes through the soil, becomes acidic, and slowly dissolves the limestone.

The key to understanding caves is not time but the right conditions. With the incredible amounts of water and the right chemicals, limestone could be deposited rapidly during the global Flood of Genesis 7-8, even within weeks. Once layers form, the right mix of acids and microbes that produce sulfuric acid could eat away the limestone quickly, carving passages and chambers. In addition, new evidence suggests the process was accelerated by rising hot acidic waters from deeper in the earth that "eroded" the caves. Such conditions existed during the Flood. "The largest subterranean chambers anywhere in the world could have been excavated during one year," says cave expert Emil Silvestru.

While the official guided tours promote an evolutionary timeframe, a little bit of study ahead of time will help you understand how the unique conditions of the Flood, which will never be repeated, helped to make these subterranean wonders possible.

The two most well-known formations in caves are stalactites and stalagmites. These formations result when the right mixture of water and calcite enters the cave. As the carbon dioxide bubbles away, the calcite is deposited. They have been found to form rapidly under the right conditions.

One way to remember the difference between stalactites and stalagmites is that one hangs "tite" to the top ceiling-stalactites. Stalagmites, on the other hand, "mite" rise from the floor toward the middle.

As rainwater falls through the atmosphere and passes through decaying organic matter in the soil, it picks up carbon dioxide (CO2), making the water acidic. As this carbonic acid (the acid that forms when CO2 is combined with water) makes its way underground through cracks and fractures in the earth's surface, it reacts with the limestone, dissolving it. If this rainwater drips slowly enough from cracks, the water evaporates within the caves to leave behind lime deposits that form stalactites and stalagmites.

This is a very slow process today. But the Flood created several unique conditions that could speed up the carving of caves. It is likely that tectonic activity released lots of hydrogen sulfide into rising hot waters, and the groundwater level remained high for some time. The acidic water could have worked very quickly.

Bats are the only flying mammal. Interestingly, we don’t find any other version of flying mammals in the fossil record. Moreover, they look like bats everywhere we find them. These creatures give wonderful testimony to their wise Designer, who made every kind of flying creature on Day 5 of creation. 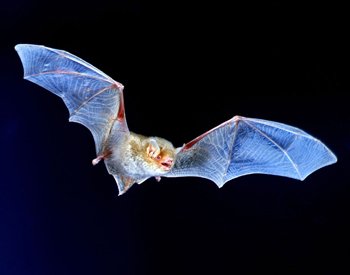