Blaise Pascal was born one of three children on 19 June 1623, in the town of Clermont-Ferrand in rural France. Unfortunately, his mother died when he was only three. The family later moved to Paris.

Throughout his life, Blaise’s health was extremely poor, but he was blessed with a brilliant mind. Initially his father feared that learning mathematics might overstrain him, but this only served to arouse Blaise’s interest.

At 14, Blaise began attending weekly lectures in mathematics. It was from these weekly meetings of mathematicians that the French Academy of Sciences later developed. When only 16 years old, Blaise wrote a paper on conic sections1 which was acclaimed by his fellow mathematicians as ‘the most powerful and valuable contribution that had been made to mathematical science since the days of Archimedes.’2 This paper ‘laid the foundation for the modern treatment of conic sections.’3 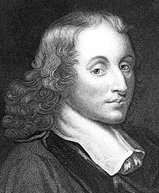 Blaise Pascal always tried to make his work in science and mathematics of practical use to mankind. While still a teenager, he invented the first machine to do calculations—an arithmetic machine which could add and subtract. This machine involved a set of wheels, each with the numbers zero through to nine on them. The wheels were connected with gears, so that a complete turn of one wheel would move the wheel next to it through one-tenth of a turn. This machine was of great use to his father—a judge in the taxation court—and to others involved in calculations. Although expensive to make and difficult to operate, Pascal’s calculating machine was an essential step in the subsequent development of calculators and computers.

In 1646, Pascal joined the Jansenists—a group of Catholics in France who believed as Calvin did on some doctrines, including salvation through God’s love and grace, rather than through good works. Pascal believed that ‘There is a God-shaped vacuum in the heart of every man which cannot be filled by any created thing, but only by God the Creator, made known through Jesus Christ.’4 Pascal wholeheartedly believed that the events described in the book of Genesis were actual historical events. The Encyclopaedia Britannica states that Pascal believed ‘man’s wretchedness is explicable only as an effect of the Fall’5 and that ‘For Pascal as for St Paul, Jesus Christ is the second Adam, inconceivable without the first.’5

Pascal wholeheartedly believed that the events described in the book of Genesis were actual historical events.

Now a committed Christian, Pascal continued his work in science and mathematics. Pascal’s experiments with the barometer proved the now familiar facts that atmospheric pressure (as shown by the height of the mercury in the barometer) decreases as altitude increases, and also changes as the weather changes. Pascal made a valuable contribution to developing both hydrostatics and hydrodynamics.6 He showed that the ‘pressure applied to a confined liquid is transmitted undiminished through the liquid in all directions, regardless of the area to which the pressure is applied.’ This is known as Pascal’s Law and is the principle behind the hydraulic press, which Pascal designed. During these experiments with fluids, Pascal invented the syringe.

Pascal also investigated the cycloid—the curve formed by a point on the circumference of a circle as the circle rolls along a straight line. Pascal’s discovery of many physical and mathematical properties of the cycloid was an important step towards the later development of calculus by others.

Pascal also worked with another mathematician, Fermat, on the Theory of Probability. Letters between the two ‘show that Pascal and Fermat participated equally in the creation of the theory.’7 Although their investigations were carried out on various gambling situations, this theory has an immense number of applications. It is the basis of all insurance schemes and it is of great value to many other branches of science such as quantum physics, where the behaviour of particles can be described using probabilities. Pascal invented a simple method now known as Pascal’s Triangle to determine the probability of certain outcomes.

Pascal attended parties where gambling was being conducted, and unfortunately became distracted by this lifestyle. However, Pascal had a narrow escape from death in 1654, when the horses pulling his carriage bolted. The horses were killed, but Pascal was unhurt. Convinced that it was God who had saved him, he reassessed how he was living. From then on,

At this time of recommitment to God, Pascal wrote:

‘I forget the world and everything but God! …

‘I submit myself absolutely to Jesus Christ my Redeemer.’9

Much of Pascal’s last few years was devoted to his religious writings. He wrote a famous series of 18 letters known as the ‘Provincial Letters,’ considered by critics to mark the beginning of modern French prose. Pascal also wrote the outstanding book Pensees (French for ‘thoughts’) in which he argues the case for his Christian beliefs.10

Pascal recognized that man could not arrive at all knowledge by his own wisdom. He wrote that ‘Faith tells us what the senses cannot, but it is not contradictory to their findings.’11 He also recognized that God was more than just the Creator—He was a loving, personal God as well—‘the God of Abraham, the God of Isaac, the God of Jacob, the God of the Christians is a God of love and consolation.’12

Pascal is famous for the statement known as Pascal’s Wager in which he applied his thinking in terms of probabilities to the question of salvation. Pascal’s Wager paraphrased is:

‘How can anyone lose who chooses to become a Christian? If, when he dies, there turns out to be no God and his faith was in vain, he has lost nothing—in fact, he has been happier in life than his non-believing friends. If, however, there is a God and a heaven and hell, then he has gained heaven and his skeptical friends will have lost everything in hell.’13

When approaching his death, Pascal wrote: ‘And so I stretch forth my hands to my Redeemer, who came to earth to suffer and die for me.’14 Pascal died on 19 August 1662, in Paris. Despite a short life with constant sickness and pain, this devout Christian made outstanding contributions to science, mathematics, and literature.

Pascal’s triangle is constructed very simply—each number in the triangle is the sum of the two number(s) immediately above it. It is very useful for finding the probability of events where there are only two possible outcomes. This includes tossing a coin (head or tail) or having a child (boy or girl). For example, if a coin is tossed three times, there are eight (2x2x2 or 23) possibilities:

If we look at Row 3 of the triangle, we see the numbers 1,3,3,1. This tells us that there is only one way of obtaining all heads or all tails, but three ways of obtaining two heads and one tail, or two tails and one head. Translated to probabilities, the chances of the possible outcomes are: