Where Are the “COVID Babies”? 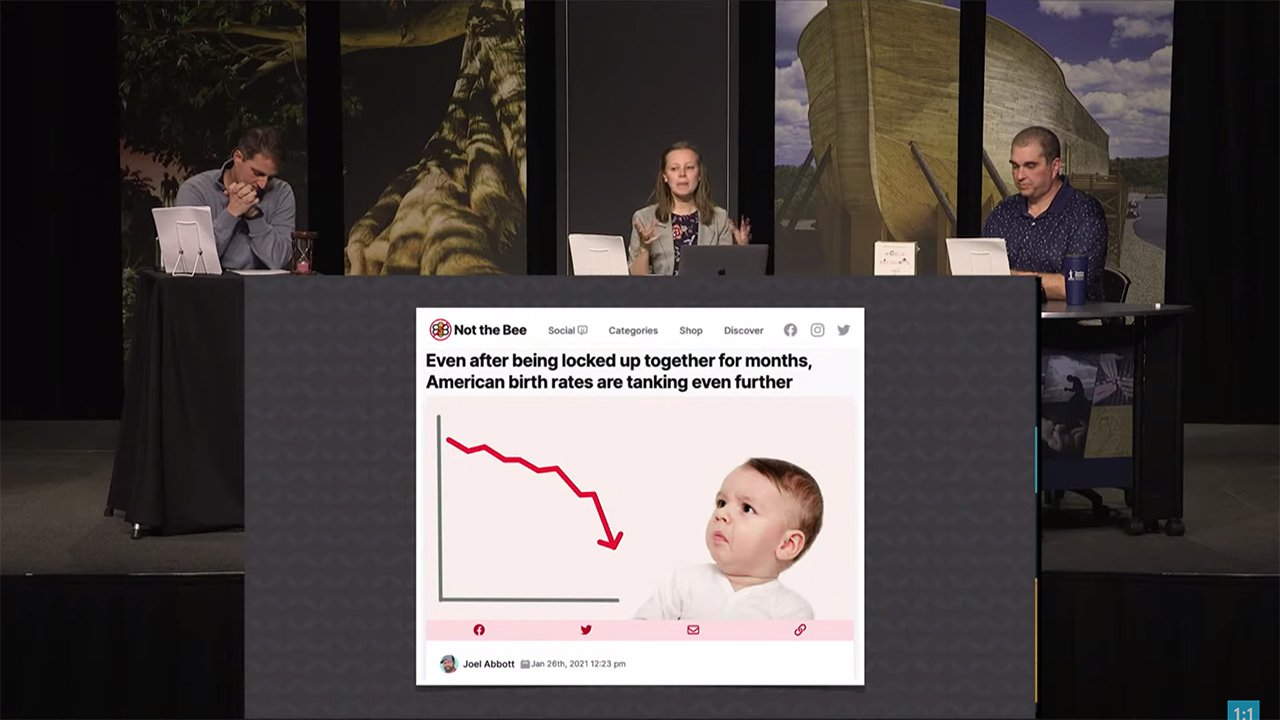 Back in March and April, when the first round of lockdowns and quarantines began in the United States, many people were predicting a baby boom nine months later. After all, historically, when an event (such as a major weather calamity) forces people to stay home, babies arrive nine months later. These “COVID babies,” “quarantine babies,” or “‘Rona babies,” as people were calling them, should be here by now . . . but they aren’t. According to one researcher, there’s been no “baby boom.”

Rather than a baby boom, it’s been a baby bust.

Sociologist and demographer Philip Cohen from the University of Maryland compiled data for birth rates in 2020, and he found “birth rates have substantially declined during the past few months.” Rather than a baby boom, it’s been a baby bust with—for example, an 8% drop in Florida, 7% in Ohio, and 5% in Arizona compared to 2019. Cohen also noted that pregnancy-related Google searches are down as well. And keep in mind, the birth rate here in the United States is already at historic lows! As Cohen said, “This is a bad situation . . . The declines we’re seeing now are . . . pretty substantial.”

Now why could this be? Well, Cohen pointed to factors such as economic instability and the “expense” of having a child as a reason people may delay or decline having children. But it certainly goes deeper than that: the birth rate in the US (and across the West and in many other nations) has been dropping every year for a while. (This is going to create some serious problems for society as the population ages with fewer young people to care for the elderly and fill vacant jobs.) I believe the ultimate root is the same as what is destroying marriage, sexuality, gender, and the family: the religion of secularism and its natural and sinful outcomes.

Marriage is looked down on, careers and successes are praised, and children are disposable and considered a hindrance to free sex, a successful career, and freedom to travel or do whatever you want.

Think about it—the prevailing religion of the West is secularism, with the majority of young people today (Gen Y and Z) holding to this religion. Secularism/humanism teaches that you are your own god, you only have one life, you control your own life, you are accountable to no one, and you do whatever you think is best for you right now. There’s no ultimate authority and no God. Feminism, LGBTQ, sexual “freedom,” and abortion are integral to this worldview. Marriage is looked down on, careers and successes are praised, and children are disposable and considered a hindrance to free sex, a successful career, and freedom to travel or do whatever you want. The anti-God secular worldview is inherently anti-family, anti-marriage, and anti-children.

Generations have gone through the public school system and been exposed to the secular media, and thus have been indoctrinated in this worldview. Here’s just one example someone sent me recently. A few years ago, the British National Health Services posted ads like this one to encourage people not to have children: 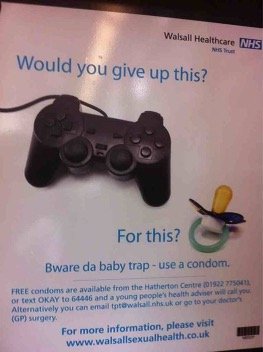 Yes, that is the government encouraging people to play video games instead of having a child! What a low view of human life! It’s no wonder so few young adults are having children when they’ve been so indoctrinated to see children as disposable, expensive, an inconvenience, and, frankly, an optional lifestyle choice, instead of the natural result of marriage (of course, in a sin-cursed and broken world some married couples are tragically unable to conceive a child—but that’s a different issue).

Contrast such a selfish, self-centered view with the biblical view. God’s Word says that sexuality is a gift from God for one man and one woman in marriage (and in this exclusive covenant relationship only). One of the main reasons for marriage (and, by extension, sexuality) is children (Malachi 2:15). Children are considered a gift from God (Psalm 127:3) and a great source of joy (Proverbs 17:6). Each child, from the very moment of fertilization, is made in the image of God (Genesis 1:27) and has infinite worth. What a pro-family, pro-child, “pro-creation” view! It’s this view that causes society to flourish as families flourish.

Now, my wife and I have raised five children, and we’re watching four of our children and their spouses raise their combined eighteen children. Parenting is hard work and involves a lot of sacrifice in many ways. Our culture recognizes that parenting requires selflessness, sacrifice, and hard work and shuns it, placing it in the category of a “life choice,” rather than the natural result of a marriage. Of course, they’ve already, by and large, divorced sexuality from marriage and shunned marriage, so the foundation for a healthy family and children isn’t there! But let’s also be reminded that this culture is killing off hundreds of thousands of children each year by abortion!

What a mess our culture has gotten itself into by ignoring God’s Word and starting its thinking with man’s sinful, fallible ideas.

What a mess our culture has gotten itself into by ignoring God’s Word and starting its thinking with man’s sinful, fallible ideas. As in all areas, we must teach our young people what God’s Word teaches, beginning in Genesis. And it is clear—children are a gift from God, a blessing, and God has designed us to be fruitful and multiply (Genesis 1:28).

Today Is a Special Anniversary

I did want to note that today is the 7th anniversary of my debate with Bill Nye at the Creation Museum. People still talk about that debate all around the world! We conservatively estimate that 20 million people have seen that debate. (If you haven't watched it yet, you can find it on YouTube or on Answers TV). Then Nye and I had a second, more informal debate, on July 8, 2016, when I took him through the life-size Noah's ark at the Ark Encounter. You can find that debate on Answers.tv as well. 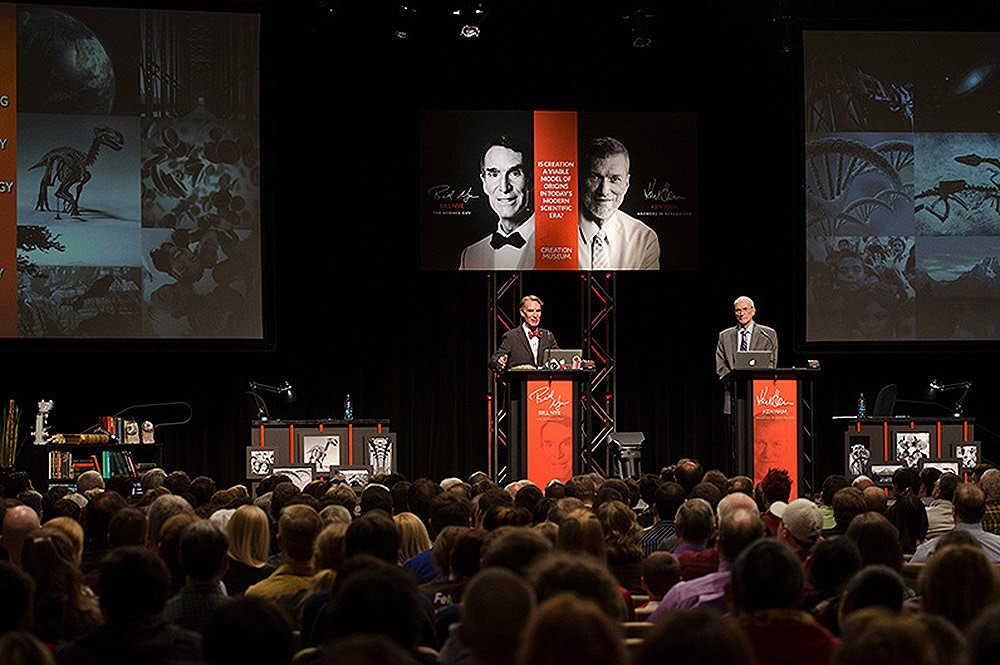 The “lack of a baby boom” item was discussed yesterday on Answers News with cohosts Roger Patterson, Bryan Osborne, and Avery Foley. Answers News is our twice-weekly news program filmed live before a studio audience here at the Creation Museum and broadcast on my Facebook page and the Answers in Genesis Facebook page. We also covered the following topics:

Watch the entire episode of Answers News for February 3, 2021.