Cultural Christianity Continues to Decline, Replaced by “Nothing in Particular” 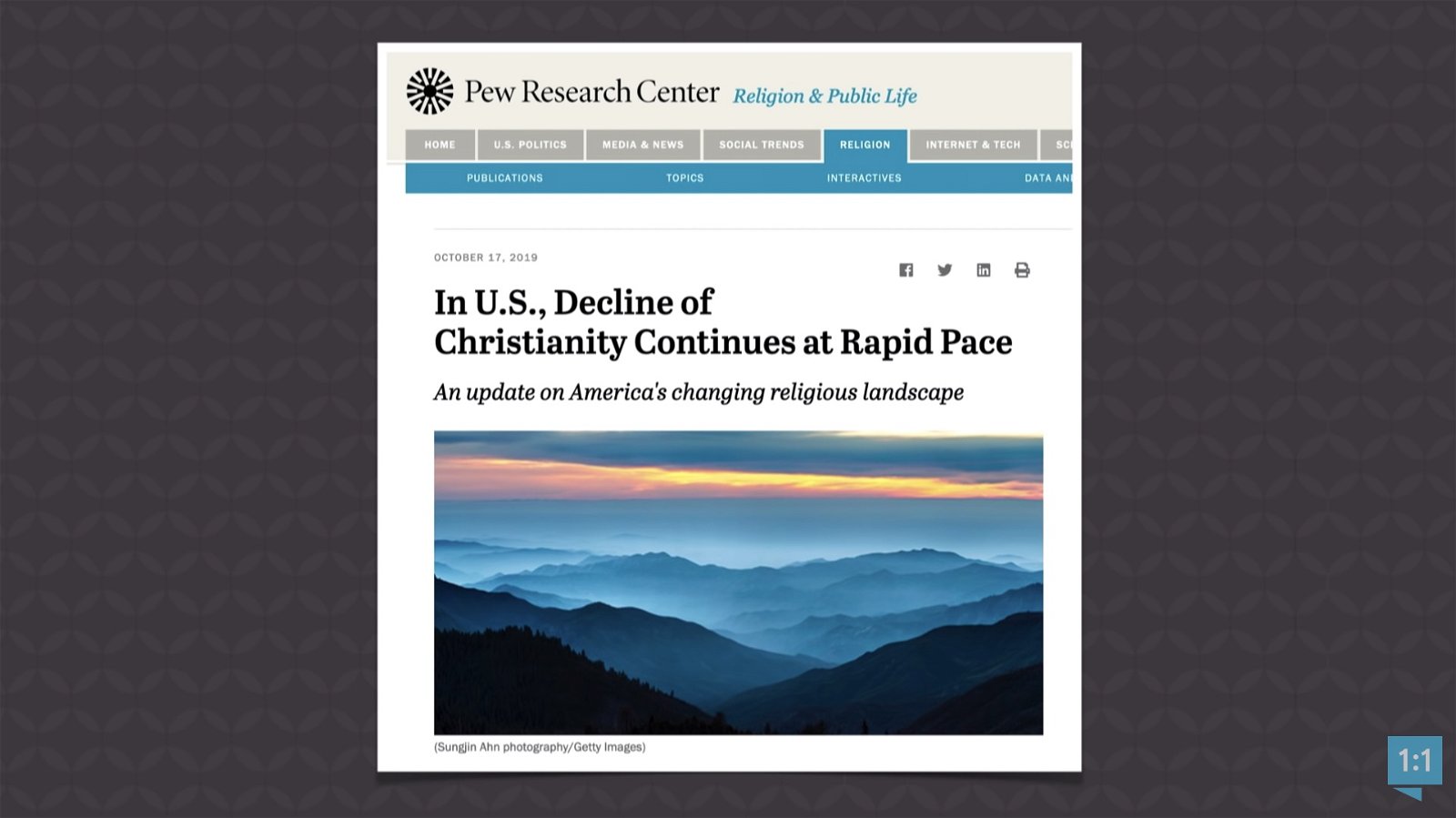 “In U.S., Decline of Christianity Continues at Rapid Pace,” is the headline of a recent Pew Research Center report. The article confirms what our research for my book Already Gone and other sources having been saying for years—across the West, Christianity is on the decline, and secularism is on the rise, including here in the United States. How should we understand this troubling report?

Well, we should note that 17% (nearly 1 in 5) of Americans state that their religion is “nothing in particular.” This percentage really shows the secularism and the subjectivity of our culture, which results in moral relativism permeating the culture. Instead of believing in revealed, unchanging truth (given to us in God’s Word), this 17% of Americans prefer to piece together their own religion of “nothing in particular,” with pieces taken from Christianity, New Age, Buddhism, Secularism, and more. It’s a religion made in the individual’s image, based on personal feelings.

We can’t assume they understand who the God of the Bible is, what sin is, or what Jesus came to do.

When we are sharing the precious and life-changing message of the gospel with others—particularly those of the Millennial generation (of whom 40% say they believe “nothing in particular”) and the one coming after (Gen Z)—we can’t assume they have any kind of Christian foundation. We can’t assume they understand who the God of the Bible is, what sin is, or what Jesus came to do. The shared Christianized foundation that cultural Christianity gave is long gone—it’s a different world now. Evangelism is now taking place in the West against a largely secular, even atheistic, backdrop (like the Greek culture of Acts chapter 17). It’s vital that we’re equipped to understand and defend the historicity, authenticity, truthfulness, and uniqueness of both the Bible (the ultimate source of truth) and the gospel message.

Now, there was a little statistic tucked away towards the end of the article that’s worth noting. The report states that evangelical Christians have declined as a share of the US population as a whole, from 28% to 25% of the US population. But, when “looking only at Americans who identify as Protestants – rather than at the public as a whole – the share of all Protestants who are born-again or evangelical is at least as high today as it was in 2009” (emphases theirs). What this demonstrates is that the drop in Christianity noted in the article (a decline of 12%) is mostly not evangelical, Bible-believing Christianity, it’s the mainline Protestant denominations that largely do not preach biblical authority and the gospel anyway. So, while cultural Christianity is declining, the number of those who hold to the gospel is remaining steady. And that’s encouraging!

Christianity is growing in places like Africa and Asia, where, as the report shares, there are more Christians than in North America.

Christianity is growing in places like Africa and Asia, where, as the report shares, there are more Christians than in North America. And our Latin American director, Joe Owen, recently shared about the incredible growth of the evangelical church in Latin America (where the Reformation is really just beginning). He shared a very encouraging report at our annual Answers for Pastors and Leaders conference, and I urge you to watch it below:

Scripture tells us that Christ will build his Church (Matthew 16:18), and he continues to do so around the world. While it’s sad to watch the decline of Christianity and the rise of secularism throughout the West, we know that God will keep his promise to build his Church. Our job is to remain faithful in proclaiming his Word and the gospel as we “contend for the faith” (Jude 1:3) and do the King’s business until he returns. That’s what Christians have done since the book of Acts and will continue to do until Christ returns—God will build his Church, and we get to be part of what he is doing!

This item was discussed Monday on Answers News with cohosts Avery Foley, Dr. Gabriela Haynes, and Bodie Hodge. Answers News is our weekly news program filmed live before a studio audience here at the Creation Museum and broadcast on my Facebook page and the Answers in Genesis Facebook page. We also covered the following topics:

Watch the entire episode of Answers News for October 28, 2019.